Egypt’s international reputation will continue to sink if it fails to uphold accountability for the bloody dispersal of pro-Morsi sit-ins in Cairo last August that resulted in the deaths of over 1,000 people. 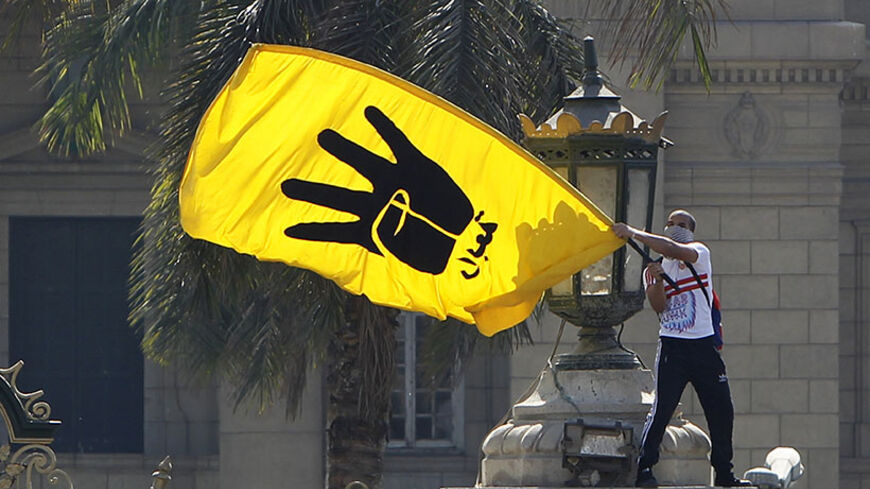 A student supporter of the Muslim Brotherhood waves the yellow flag bearing the four-fingered Rabia sign during a demonstration outside Cairo University, May 14, 2014. - REUTERS/Mohamed Abd El Ghany

Last week saw the anniversary of the most traumatic month of recent Egyptian history. The forceful dispersal of the pro-Morsi sit-ins by Egyptian security forces, and its repercussions in terms of other types of violence led by militants and sectarian attacks, was an ordeal that Egyptian society has yet to fully grasp and come to terms with. But the month of August 2013 in Egypt was not a tribulation that can simply be dismissed, in the hopes it will be forgotten. Without investigating accountability for the events of last summer, that entire month will constantly have repercussions in Egypt’s present and future. Taking up that challenge will not only ensure more responsible attitudes in the future, it will avoid the intensification of international pressure upon Egypt in the months and years to come.

In August 2013, a slew of rights groups within Egypt and outside of it expressed grave concerns about the prospects of dispersing the sit-ins by force, worried about the likelihood of civilian fatalities. Human Rights Watch (HRW) described it as “the most serious incident of mass unlawful killings in modern Egyptian history.” Their assessment converged with the appraisals of many in the international community, in addition to Egyptian civil society groups.

As a result of this pressure, the Egyptian state was forced to recognize that, regardless of the “war on terror” rhetoric that energized large parts of the Egyptian populace, there were questions that had to be addressed. The National Council of Human Rights (NCHR), a quasi-state body, revealed that hundreds of civilians were killed as a result of the dispersal. The interim President Adly Mansour called for a national fact-finding commission as a result of the NCHR’s report, implicitly recognizing that there was something to investigate. It is due to be released next month.

Unfortunately, the signs that full accountability and transparency is forthcoming for the events of August 2013 are not encouraging. The NCHR report was widely criticized by independent human rights groups for not being thorough enough. Many of these groups are already concerned about an impending deepening of restrictions against their work. When they have their own reports, such as the Egyptian Initiative for Personal Rights report issued in June 2014, their findings don’t seem to have any impact. When HRW finally released, a year later, a full-length report of some 200 pages, condemning the dispersal as “probably amounting to crimes against humanity,” the Egyptian authorities and media responded vehemently, with accusations of bias toward the Muslim Brotherhood-led “Anti-Coup Alliance.”

The deportation of HRW officials upon arrival into the country, who were there to release the report, as well as the official written response of the Egyptian authorities to the report, makes it clear the Egyptian state views HRW as working against Egypt’s interests. But it is not only HRW that has called for a fully transparent international enquiry. Others, such as the Council on Advancing Arab-British Understanding in London, have endorsed such calls. The response of the Egyptian state has been to treat such calls as threats to Egyptian sovereignty, which amounts to a dismissal. But the disengagement comes at a certain cost on the international level. It not only weakens Egypt’s international position to be perceived as uninterested in the conclusions of independent human rights organizations, it strengthens the position of its opposition and invites further international pressure on its actions.

There are organizations that the international community is aware are political fronts for the Muslim Brotherhood-led opposition, which thus have vested interests in politicizing legitimate and valid concerns about the events of last year. But as these concerns are indeed legitimate and valid, they won’t be swept under the rug as akin to political propaganda, particularly when they are raised by organizations that have a long record of being critical of the Brotherhood, such as HRW.

There are many others, inside and outside of Egypt, who see the violent dispersal of the sit-ins as part and parcel of a sequence of different events where protesters were killed over the post-January 25 Revolution period in Egypt. While the Aug. 14 breakup of the Rabia sit-in was the single most vivid occurrence, where the prime minister of the day, Hazem el-Biblawi, estimated around 1,000 people were killed in one day, there have been at least a dozen examples of protester killings over the past four years. Those findings mean that while many within Egypt may want to forget about Rabia, nongovernmental organizations, foreign governments, various international media outlets and even parts of the Coptic Orthodox Church will simply not let the issue rest without some sort of acceptable closure in terms of accountability and responsibility.

These various reports coming out from independent rights groups are not based on a desire to harm Egypt’s international reputation or infringe upon Egyptian sovereignty. Rather, it is the fear and worry that the authorities will not hold their own institutions to account appropriately, particularly when quasi-state institutions like the NCHR respond defensively to the reports like the one issued by HRW.

The lack of action over the past year with regard to the dispersal led to this HRW report, and the calls for an international enquiry being taken seriously by other parties. There is little suggestion of them being implemented by other states, but that is not beyond the realm of possibility in the future, especially if the Egyptian authorities are increasingly perceived as being uninterested in transparency over the events of last August. It is unlikely the International Criminal Court would take jurisdiction for any investigation, but even the suggestion of it damages Egypt’s reputation internationally.

Or, the Egyptian state can take the initiative and show its willingness to investigate more deeply without the impetus of further international pressure, becoming more, not less, accountable and responsible. Many within the international community will be awaiting the results of the commission with great interest, hoping that its results will not only move Egypt in the right direction vis-a-vis Rabia, but ensure that a repetition of such events will be averted in the future.