US Secretary of State John Kerry is expected to join Iran final deal talks in Vienna this weekend as expectation grows that an extension may be needed. 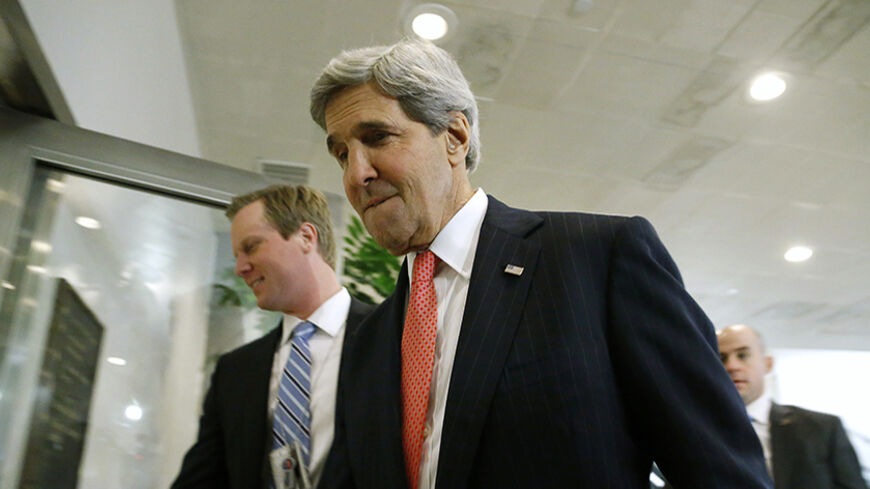 US Secretary of State John Kerry arrives to brief members of the Senate on talks with Iran at the Capitol in Washington, Dec. 11, 2013. - REUTERS/Jonathan Ernst

Vienna — US Secretary of State John Kerry will likely join high-stakes Iran nuclear talks here the weekend of July 12, but it will not be with the expectation to close a final deal, amid continued fundamental gaps in positions that are increasingly expected to require an extension to the talks.

Kerry's travel to Vienna is expected to be officially announced on Thursday (July 10). It's still unclear if some or all of the other foreign ministers from the six world powers that comprise the P5+1 will also come this weekend of July 12, western officials said.

Iran is still maintaining its long-standing position that it should be able to expand its domestic enrichment capacity to be able to fuel the Bushehr power reactor after 2021, when a 10-year Russian contract to provide the fuel for it expires, an Iranian negotiator told Al-Monitor July 9.

The P5+1 believes that Iran should have a much more limited domestic enrichment capacity in the near and medium term, sufficient to fuel its research reactors, and should continue to buy fuel for power reactors from abroad. The P5+1 has proposed that Iran could store several years’ worth of fuel reloads on its territory to reduce Iranian concerns that foreign suppliers could renege on future supply agreements.

But Iran insists that it should be able to be self-sufficient for its Bushehr fuel needs in the future, though Iran’s atomic energy chief Ali Akbar Salehi said this week Iran does not intend to domestically produce all the fuel for any future power reactors it may purchase.

"Actually, we are not planning to carry out all the enrichment [we need for fuel] inside the country,” Salehi, the head of the Atomic Energy Organization of Iran (AEOI) and former Iranian foreign minister, told Iranian Students' News Agency (ISNA) July 8. “However, the opposite sides [P5+1 member states] should know that if they do not give us the fuel for power plants, then Iran has the capacity to produce it.”

The Iranian position on producing its own fuel for Bushehr “makes no sense,” Jofi Joseph, former White House Iran non-proliferation expert, told Al-Monitor July 9. “It is a long standing rule of thumb in the nuclear industry that a state that designs and constructs a nuclear reactor also provides the fuel for that reactor, largely because each individual nuclear reactor requires unique specifications for the nuclear fuel supply.”

“Russia designed, constructed, and to this day largely still operates the Bushehr reactor; it would be odd if Russia did not supply the fuel for Bushehr,” Joseph said. “Which is why the Iranian position is so odd, and leads to suspicions that it is just a fig leaf for demanding a large enrichment capacity for other reasons.”

But while Iran has not backed off in the negotiating room from its insistence to be able to grow its enrichment capacity to supply fuel for Bushehr after 2021, diplomats said, there were perhaps hints of potential room for flexibility in comments by Salehi and Iran’s Supreme Leader this week on the debate.

“Our officials say that we need 190,000 [separative work units],” Iran’s Supreme Leader Ayatollah Khamenei said July 7. “Maybe this need will not be for this year, or two years, or five years, but this is the final need of the country.”

“While he laid out a ridiculously large number for Iran's centrifuge needs, he also noted that Iran may not need this capacity now, e.g. for the duration of a final agreement,” Joseph noted. “So he could be preparing ground for an agreement under which Iran acknowledges temporary lower limits while trumpeting the fact that it will be unconstrained once agreement expires.”

But Iran analyst Ali Vaez disagreed, saying Khamenei’s comments box Iran's negotiators in and mark a turning point for the worse in the negotiations.

"Taking the positional bargaining public diminishes the parties’ maneuvering room,” Vaez, author of a recent report on the Iran nuclear negotiations for the International Crisis Group, told Al-Monitor. “The man who has the final word in Iran has publically determined the 190K number as Iran’s ‘definite need.’ That number is 10 to 20 times more than the US can countenance, even by 2021. Narrowing that gap is a herculean task, if not impossible.”

It is a task that may require more time to see if it can be resolved, an assessment Kerry is likely to make at the talks this weekend.