Kaine: Israel stance 'no, no, no' on Iran enrichment

After meeting with Israeli Prime minister Benjamin Netanyahu in Israel, Sen. Tim Kaine (D -Virginia) said the only deal on Iran's nuclear program Israel would accept would have to eliminate every element of the Islamic Republic's nuclear program. 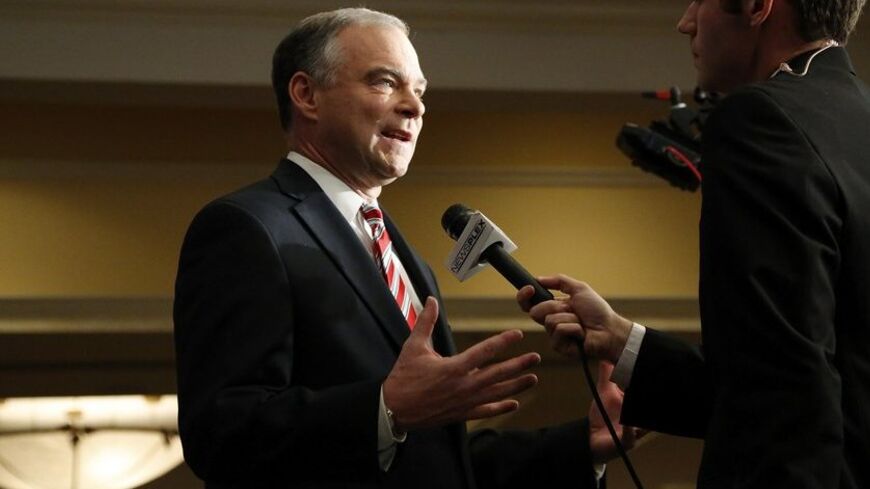 Then Democratic US Senate candidate Tim Kaine (D-VA) does a series of interviews in Richmond, Virginia November 6, 2012. - REUTERS/Jonathan Ernst

Israel’s stance on acceptable terms for a final Iran nuclear deal remains as uncompromising as that which divided Washington and Jerusalem on the merits of an interim nuclear deal last fall, Sen. Tim Kaine (D-Virginia) said Monday following a trip last week to the Middle East.

“Their position is no, no, no: No enrichment, no centrifuges, no weaponization program,” Kaine, referring to Israeli leaders, said in answer to a question on a conference call briefing with journalists Monday on his trip last week to Israel, Ramallah, Lebanon and Egypt.

Netanyahu, in a meeting with Senators Kaine and Angus King (Independent-Maine) in Israel last week, “said nothing about the pending legislation,” Kaine said, referring to stalled Iran sanctions legislation co-sponsored  by Senators Bob Menendez (D-NJ) and Ron Kirk (R-Illinois). “He expressed what he has [previously] expressed. He has not backed away one iota [from his position] that the interim deal is a bad idea in his view. But he acknowledged…that the deal is done.”

Now the Israeli leader is turning his focus to how to “structure the final deal …so that it accomplishes what needs to be accomplished, and what would such a deal look like,” Kaine said, adding that Netanyahu did not refer to specific draft U.S. legislation on the matter. “He’s aware that if we can’t find an acceptable deal, it’s not hard to get Congress to pass more sanctions.”

When Netanyahu comes to Washington next week to address the American Israel Public Affairs Committee policy conference and to meet with President Obama, “I suspect that rather than a speech that three quarter deals with” the six month Join Plan of Action that went into effect last  month, he will spend “a lot of time on what should be the components of a final deal” and what “assurances will be needed.”

Asked if the Israeli leader had shown any signs of softening his maximalist positions from last fall that an acceptable Iran nuclear deal could allow no centrifuges or domestic Iranian enrichment, Kaine said no.

“I understand and they [the Israelis] understand that this is a negotiation,” Kaine said. “At the end of the day, we have the same goal of a diplomatic solution, [of Iran] without a nuclear weapon and easy ability to produce a nuclear weapon. Exactly how to define that question of what is acceptable in terms of nuclear research and what is unacceptable, that gets too close to a weapon, there are some gray areas."

"The US and Israeli perspectives may be a little different," Kaine continued. "That demands communication.”

Kaine also said that both Israeli and Palestinian leaders expressed gratitude for Secretary of State John Kerry's efforts to advance a framework for an Israel-Palestine two state solution, but that both expressed doubts the other side was willing to make the necessary compromises and concessions for it to succeed.

In Lebanon, he said Lebanese leaders told him and King that they appreciated US financial support for humanitarian efforts to support the hundreds of thousands of Syrian refugees in the country, but that what was needed is to improve conditions inside Syria to slow the refugee exodus and move to end the conflict. He and King were preparing to leave a briefing at the US embassy in Beirut last week when a suicide blast went off some five miles south at an Iranian cultural center, killing several people--the latest sign of sectarian spillover violence from Syria's civil war that threatens to destabilize its neighbors.

Kaine, the chair of the Senate Foreign Relations Committee's Near East and South Asia subcommittee, plans to hold a subcommittee hearing on Lebanon on Tuesday.