A handful of Democrats are calling on President Barack Obama to “redouble” US engagement in the Israeli-Palestinian conflict. 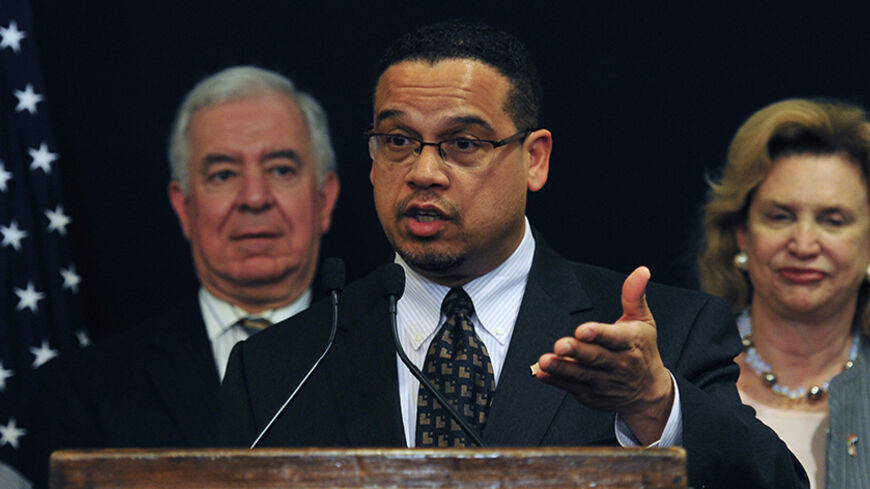 A handful of liberal Democrats are urging President Barack Obama to “redouble” diplomatic efforts to achieve a cease-fire in Gaza even as the administration and the rest of Congress side squarely with Israel.

In a letter sent Thursday to the president and Secretary of State John Kerry and obtained by Al-Monitor, a half-dozen lawmakers call for an end to the “cycle of violence” in the region. The latest flare-up, they write, is further proof that a final status agreement is “urgent and necessary” and should not be abandoned despite the collapse of the latest talks.

“The United States can help save Israeli and Palestinian lives by using all diplomatic leverage to work vigorously with US allies to urge for an end to the violence,” reads the letter spearheaded by Rep. Keith Ellison, D-Minn., one of only two Muslim members of Congress. “We urge the administration to continue its efforts to facilitate an agreement that will engage and garner support from all parties involved in this cycle of violence.”

While the letter doesn’t assign blame for the latest violence, which had left more than 270 Palestinians and two Israelis dead as of Friday morning, it criticizes Hamas for “indiscriminately launching thousands of rockets into Israel.” The lawmakers also praise Israel for its “willingness to agree to the terms of the [cease-fire] agreement” proposed by Egypt, which Hamas has rejected.

But the letter also points out that any attack against densely populated Gaza will inevitably kill many civilians, further inflaming Israeli-Palestinian tensions: “Past experience indicates that the current conflict will likely end with a new cease-fire,” the lawmakers wrote. “Ground troops, airstrikes and rockets do not lead to permanent peace in the Middle East.”

The letter is in contrast with the Senate, which unanimously passed a resolution Thursday evening reaffirming Israel’s right to self-defense and calling on Palestinian Authority President Mahmoud Abbas to dissolve his unity government with Hamas.

The House letter ends by urging the administration to restart peace talks.

“The relative calm that existed during Kerry’s recent diplomatic talks between Israel and Palestine shows that engaging in dialogue is the first step toward stopping the violence,” the lawmakers wrote. “Additional diplomacy is necessary to save lives and create lasting peace. Finally, the current confrontation proves that a final status agreement in which both Israelis and Palestinians can live in peace and security is urgent and necessary.”