Turkey is again stepping up relations with Qatar by adding cultural and commercial links to their political collaboration in the international arena. 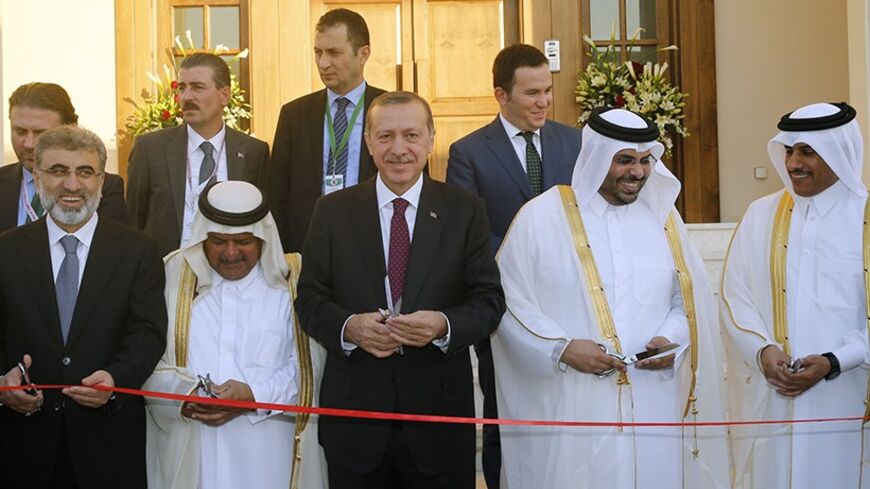 It has not been easy to affirm meaningful cooperation between Qatar and Turkey in several fields, despite the political geniality that grew out of the Arab Spring. Serious relations lag behind nonpolitical factors, like Turkish TV serials and coach Bulent Uygun, who upgraded Qatari football.

Despite their common moves in international platforms, especially in the Organization of Islamic Cooperation, and their similar reactions to the political processes in Syria, Egypt, Libya and Jordan, for some reason, Qatar and Turkey have not been able to develop the economic aspect of their partnership.

In particular, the two countries acted as a single bloc in Syria, risking isolation in the international arena. They contributed jointly to the formation of the Syrian opposition’s civilian wing, the Syrian National Council and its military wing, the Free Syrian Army (FSA). When the Qatar-Turkey line deviated from the American-Saudi approach, the rivalry that developed in the reformatting of the opposition as the Syrian National Coalition and the FSA as the Higher Military Council, the two countries continued to back each other. The result was Turkey and Qatar being held responsible for the political costs of the bankrupt policy in Syria.

In its attempt to eradicate the Muslim Brotherhood in Egypt, Saudi Arabia's open target is Qatar, while Turkey is the undisclosed target.

Ankara was not happy when this linking of fates in politics did not mean economic cooperation. This improved recently when a Turkish firm was awarded a $4.4 billion mass-transit construction contract to prepare Doha for the 2022 World Cup. Turkish companies STFA and Yapi Merkezi succeeded in winning the most lucrative leg of the “gold line” bidding.

Like many other countries, Turkey is striving to get its share of Qatar's infrastructure projects such as railways, express roads, stadiums and hotels. About 700 companies demonstrated interest in the Doha metro, and 290 companies — forming 70 consortiums — were qualified. In the end, 18 consortiums of 52 companies were invited to bid. The $4.4 billion metro project is the largest single contract ever won buy a Turkish company abroad.

Prime Minister Recep Tayyip Erdogan, while opening the new Turkish Embassy building in Doha in December 2013, said that 35 Turkish companies are involved in projects exceeding $12 billion. But these numbers, which have increased slightly over the last few months, were not satisfactory. Minister of Finance Mehmet Simsek said, “Political relations are at a perfect level and there is a lot of distance to cover in commerce and investments.”

During his December visit to Doha, Erdogan announced that a branch of Yunus Emre Cultural Centers, which symbolize Turkey’s “soft power,” would open in Doha, and that this would strengthen the relations. No doubt that cultural institutions smooth the way for economic ties. Erdogan’s visit was followed by a Turkish festival in Doha in April 2014 to promote Turkish culture.

It's not easy to gauge the effects of cultural exchanges like a music festival, but it's not an exaggeration to say that nonpolitical factors, such as Turkish TV serials and football coach Uygun, helped boost relations. Uygun, who took over coaching of Umm Salal team, injected vitality into Qatari sports. The team had not won a single game in its last 12 matches, but once Uygun became coach, the team won eight of its nine games, tying one. Uygun, taking advantage of the limelight, relays messages on how relations between the two countries have to be reinforced. Now, the Qataris are said to be after the former coach of Fenerbahce, Aykut Kocaman. If Kocaman is transferred to Al-Gharafa as expected, football will become a substantial catalyst in Turkish-Qatari relations.

Of course, this cannot be compared with the more than 4 million Russian tourists who visit the country, but, when you consider the spending and investment potential of the Qataris who number no more than 280,000, Erdogan’s brotherly embrace of Qatari Emir Tamim bin Hamad Al Thani is better understood.

If these efforts yield results, it could mean that Erdogan, whose relations with the West are in the doldrums, will find the hot money he wants from the Gulf.