Tehran poll: 60% believe media has little or no freedom

Iran’s Ministry of Culture and Islamic Guidance has released the results of a domestic poll of how Tehran residents view television and print media. 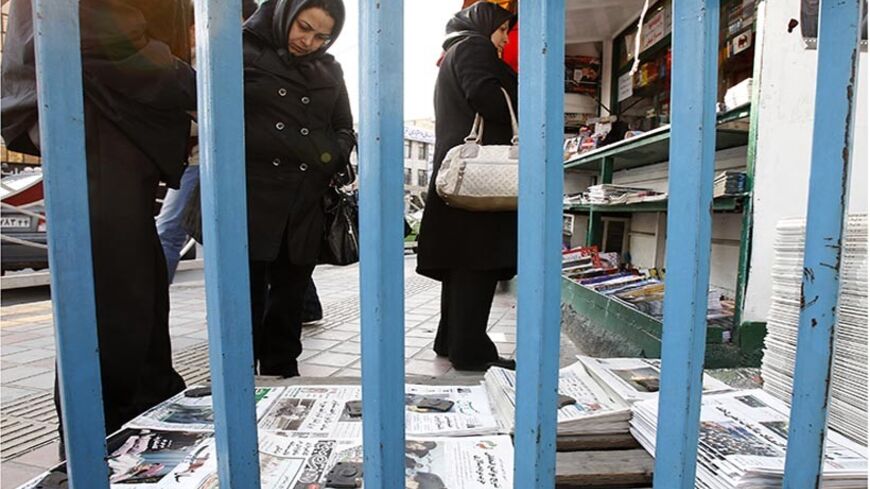 Iran’s Ministry of Culture and Islamic Guidance released the results of a domestic poll of how citizens of Tehran view television and print media. While polls in Iran can be difficult to conduct for a variety of reasons, the findings reflected some negative views toward Iran's domestic media.

The poll was ordered by the ministry’s Press and Information Department, which is headed by Deputy for Press Affairs Hossein Entezami. According the Culture Ministry’s website, 923 Tehran citizens were interviewed in March 2014. Of these, 56% were men and 44% were women.

Of the 861 people who responded with their thoughts on newspapers' level freedom to cover news, 14.5% said it was very high, 30.5% said to some degree, 43.5% said little or very little and 11.5% said not at all. The Culture Ministry’s website concluded that “60% of those surveyed believe the media does not have freedom of expression or has very little freedom of expression.”

The poll showed Tehran residents' average time spent reading of newspapers was 49.3 minutes daily, and 48.4 minutes for magazines. The most read newspaper was Hamshahri at 44.1%. Hamshahri is published by the municipality of Tehran and distributed within the city. It should be noted, however, that the paper does not take an editorial line supportive of Tehran Mayor Mohammad Bagher Ghalibaf. Other popular newspapers were Iran newspaper, which is operated by the administration, at 12.2%, Jaam-e Jam at 7.5% and various sports publications at 5.9%.

According to the poll, 51.5% of Tehranis said that they don’t use satellite channels for news, while 7.2% said always, 12.6 often, 19.7% sometimes and 9% rarely. Satellite dishes are ubiquitous in Iran and a source of concern for some officials worried about Western influence. While the poll did not address this issue, BBC Persian and Voice of America are the two most widely known news channels beamed into Iran via satellite.

The results of the survey were published May 11. According the Culture Ministry, another survey of this kind was taken eight years ago. Since President Hassan Rouhani’s election, Reformist newspapers have been able to cover a wider range of topics. Many editors believe that conditions have improved since the presidency of Mahmoud Ahmadinejad. However, the judiciary is still active in targeting Reformist newspapers, particularly on religiously sensitive issues. Rouhani’s culture minister, on the other hand, has recently targeted and temporarily closed two hard-line publications.