As the presidential elections approach, the Syrian regime is seeking validation in a high voter turnout. 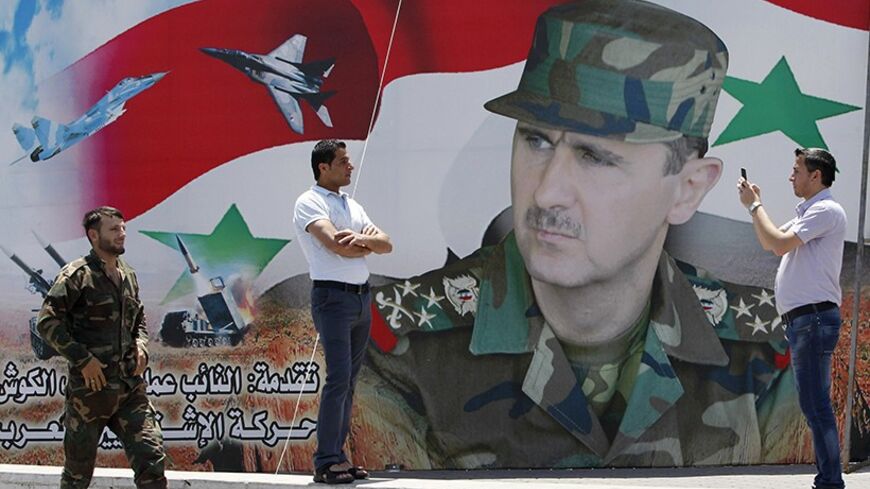 A man takes a photo of his friend in front of a poster of Syria's President Bashar al-Assad at Umayyad Square in Damascus, May 16, 2014. - REUTERS/Khaled al-Hariri

The numerous military checkpoints, queues of trucks coming from Beirut and tons of presidential candidate posters hung in the streets are currently dominating the Syrian capital.

The first thing that draws the attention of people visiting Damascus from the Lebanese capital through the al-Masnaa border crossing is the dense traffic between the two countries. Syrians are moving in both directions, and the Lebanese gather at the gates where travel documents between the “two brotherly countries” are inspected.

There are endless big buses full of Shiite pilgrims. Asking them about their destination gets a double surprise. Some of them are going to visit the Shrine of Zeinab near Damascus, in an area that has remained for two odd years an axis of heavy fighting until the sacred Shiite site finally became safe in the custody of the pro-regime forces following the developments in the Ghouta area. Others will cross the entire Syrian territory to visit the Shiite holy places in Iraq. These two directions are supposedly fraught with danger, but the Lebanese Shiite pilgrims are reassured by authorities, and the Syrians crossing the border are keen to confirm. They answer with confidence: There is no risk at all. Syria is open to the peaceful movement of people.

Once you cross the border, a series of military checkpoints begin. At least nine checkpoints along the 40-kilometer (25-mile) road between the crossing and Damascus are set up to maintain security. They thoroughly inspect all the vehicles and passengers. In the long queues, some Syrians explain that remaining on high alert is a necessary duty. Despite the Syrian army’s control over the region, it is still exposed to all kinds of risks and intrusions as it is a few hundred meters away from insurgent sites. Here, you cross the center of Zabadani, where thousands of armed men await reconciliation efforts between them and the regime.

The residential area at the other end of the border is Moadamiya, a Damascus suburb where reconciliation was reached a few weeks ago and gunmen are still around. It is true that security is prevailing here, and is maintained by this long series of checkpoints and inspections and the hassle of waiting under the sun.

At the entrance to Moadamiya, you forget the security issue and get caught up in the economic and trade dimension of the crisis. An endless row of trucks are parked on the highway, blocking all lanes and exits. It is the far entrance to the free zone that starts at the doors of the Syrian capital. Where does this huge number of trucks come from? The Port of Beirut, which is the only economic and commercial hub left for Damascus and Syria. Drivers endure endless waiting. Sometimes it takes them more than 12 hours to cross less than 200 kilometers (124 miles) between the Lebanese port and Damascus. The same thing happens at the southeast entrance to Damascus. Had it not been for the Port of Beirut, Damascus and Syria’s trade would have been different. All kinds of imported goods are loaded on those trucks, including electric generators and basic consumer goods.

There is busy commercial activity that suggests a huge wealth could be made from the Syrian crisis. People there have come to use the terms “crisis traders” and “war profiteers.”

The pictures of the three leading presidential candidates form the most prominent scene in Damascus: current President Bashar al-Assad, Hassan Nouri and Maher Hajjar. Their posters are all over the streets, electric poles, buildings — every place where a picture can be hung or a banner can be raised. It is a heated election campaign scheduled to end June 3, and there is an open war of slogans, which have in common the official campaign slogan “Sawa,” or together, in reference to the unity of all Syrians behind the president.

Not a single Syrian has any doubt about the results. Hajjar, who occupies a seat in parliament, is a former communist and a leftist. But his popularity is limited. Nouri is a university professor with ties to some regime officials. His candidacy was born out of principle rather than serious will. Assad’s victory may be decisive in his third presidential term, but official efforts are being made ​​to raise participation in the elections, and this is the most prominent issue that the Syrian media campaigns are focusing on.

Al-Monitor met a Syrian government official who preferred to remain anonymous in his office in Damascus, and he confirmed that he expects the turnout to be high. How is this possible when the country is divided between conflict zones, when the Syrians are split across this explosive map and some of them have been displaced outside the country? The official answered with full confidence, "More than 85% of the Syrian citizens and voters are located in areas controlled by the official Syrian authorities."

“It is not a matter of geographic spaces. The areas controlled by the insurgents have been almost emptied of their inhabitants, especially where extremists are in control. The towns and villages have become completely deserted. For instance, more than 90% of the residents of Raqqa province — which has been controlled by the Islamic State of Iraq and al-Sham (ISIS) — left the province. As for those who moved outside Syria, their number is also documented with the competent international organizations. There are about 2.9 million displaced people. The Syrians amount to about 25 million people today. At the time of the last parliamentary elections, there were 24,117,000 people. They must have become around 25 million today, 3 million of which, maximum, are outside Syria. The rest, which accounts for 85% of the population, live in areas under the control of official Syrian authorities, and they will heavily and excitedly participate in the presidential elections."

As far as the displaced are concerned, the official said, “We were keen to facilitate their participation. There are about 67,000 who are registered to vote in the embassy in Beirut. We also established polling stations in all of the land, sea and air border facilities. Any displaced [person] can vote at these stations, including airports, ports and land crossings. The elections will be quietly held and they will reflect the will of the Syrian people.”