The Union Coordinating Body is missing an opportunity to fix the large amount of government waste. 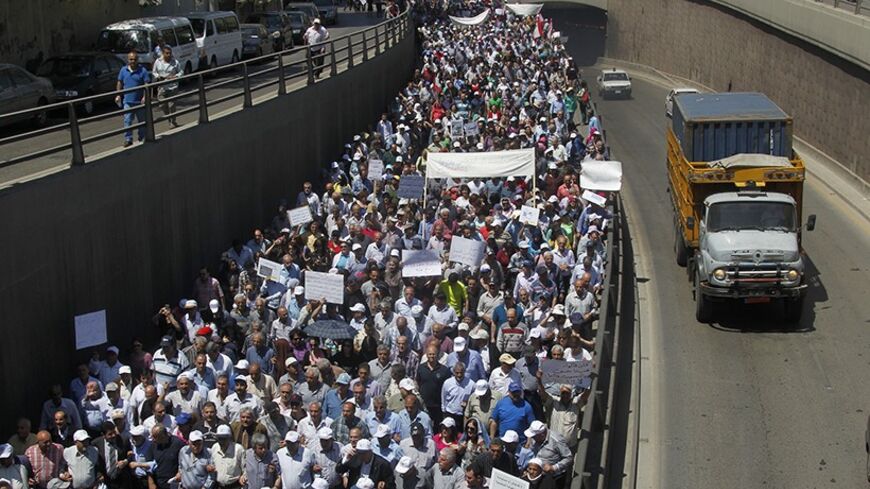 On May 8, the Union Coordinating Body (UCB) started its seven-day strike for all public sector departments in Lebanon. The UCB has set May 14 as the “day of the big explosion.” In effect, the UCB rejected the parliamentary subcommittee’s proposals to find a solution to the dilemma of the “ranks and salaries scale.”

The UCB is demanding a “full victory.” It rejected proposals to increase wages by 30-60% and insists on its basic demands: a 120% wage increase. The UCB also rejects the subcommittee’s proposal to fund the scale through tax measures totaling 1.7422 trillion Lebanese pounds ($1.16 billion), because the UCB argues that 60% of the new tax revenues would affect products and services used by all citizens.

Thus, according to the UCB, the subcommittee and the political class behind it have violated the principle of the welfare state and have surrendered to the interests of the “money whales” — i.e., big companies and Lebanese banks.

In reality, the subcommittee’s proposal and the response of the UCB, which represents workers’ rights, were a missed opportunity. The two sides entered into what looks like a dialogue of the deaf, reminiscent of the sterile, anachronistic debates between left and right that are characterized more by ideology and tactics than pragmatism and reform.

The two sides should have stood together in the face of the government and parliament and pressed toward the necessary reforms that benefit all the partners of production, and that would fund the scale entirely and free the productive sector. There is something more dangerous than the “money whales” — if there is such a thing: the “whales of waste and corruption” within the administration. Those “whales” parasitize off the living, the purchasing power of citizens and the productive capacity of the private sector.

The crisis of the ranks and salaries scale, which is pushing the country toward an economic and social explosion, has revealed the depth of the structural problem, represented by the size of the public sector relative to the Lebanese economy. It should be noted that the total salaries and wages in the public sector, if the budget is approved as is, represents 15.5% of the gross domestic product and 54.2% of state expenses. The rate in Europe is 20% of state expenses. For example, if we look at the number of teachers in the public sector — the ranks and salaries scale primarily concerns them — we find that the student-teacher ratio is 7-to-1, while the global average is about 20-to-1.

This shows how much the public sector has grown. Successive governments have avoided facing the problem despite the recommendations of international institutions, from the World Bank to the International Monetary Fund, which called for reducing the size of the administration.

This is the bitter reality, which should be blamed neither on the workers nor the employers, but on political clientelism, corruption and the absence of good governance.

The public sector grew in a way that is chaotic, marked by political clientelism and to serve the interests of political leaders. The public sector now threatens the workers’ livelihood and the employers, who are stuck between the hammer of global competition and the need to be productive on the one hand and the anvil of increased taxes and high production costs because of the lack of reforms on the other.

Regarding the subcommittee’s proposals to fund the scale, we must consider its proposal to amend Article 51 of the income tax law by raising the tax on interest revenue from 5% to 7%. It is not known whether the subcommittee bowed to the UCB’s logic of going after the “money whales,” but the results may be counterproductive and lead to the “money whales” fleeing the country. Those “whales” are no more than major depositors in Lebanese banks. If they withdraw their funds, it would threaten not just banking stability but also middle-class borrowers and small depositors.

Such a measure could have major implications considering the concentration of deposits and credits. It would be easy for the major depositors — even the Lebanese among them — to move their money to outside the Lebanese banking system, especially in light of the globalization of financial markets and availability of low interest cash.

Regarding the “greed” of Lebanese banks, it should be put into perspective. The profitability of Lebanese banks is equivalent to their counterparts in Europe and the United States and conforms to international standards — i.e., 12-13% return on average assets — but does not reflect the high risks inherent to Lebanon. Turkish banks, for example, record profits of about 19%, while Turkey is much more stable than Lebanon.

In reality, banks face the challenge of maintaining profitability for several reasons, primarily because of the Basel III requirements, which call for raising the banks’ capital to balance their large portfolio of treasury bonds worth $36 billion and representing 30% of total bank deposits. That figure is 15-20% in Europe and the United States.

Therefore, if the major depositors flee, the banks would have to pass on the cost to the remaining small depositors — i.e., the middle class and the working class — to save the banks’ profits, investors and depositors.

The bottom line is that the way the subcommittee has approached the salaries scale and the UCB’s threats will not only waste the opportunity for reform and reduce government waste, but also contribute to ruining what is left of the economy, and the UCB will be the first victim of that.