Jordanian officials insist the Syrian envoy's expulsion was based on his actions, not a rupture in ties with Damascus. 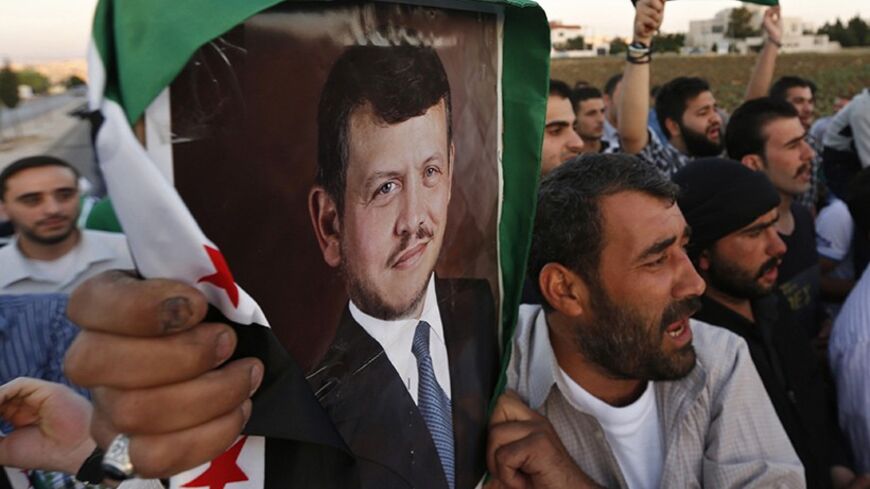 Syrians living in Jordan and Jordanian activists hold up the Syrian opposition flag alongside a picture of Jordan's King Abdullah during a demonstration in front of the Syrian Embassy in Amman, May 26, 2014. - REUTERS/Muhammad Hamed

AMMAN, Jordan — Jordan’s decision on May 28 to expel Syria’s ambassador in Amman, Bahjat Suleiman, within 24 hours came one day after the envoy was seen attending the kingdom’s celebration of its national day, which was led by King Abdullah. The decision was welcomed by the majority of Jordanians since Suleiman had ignored a number of warnings from the Ministry of Foreign Affairs because of his critical statements of Jordanian policies on Syria and vitriolic attacks against deputies and columnists because of their anti-regime stands.

Always a controversial figure, Suleiman used his Facebook page to assail Jordanian critics of Syria, ignoring the most basic diplomatic norms while inviting backers of President Bashar al-Assad’s regime to meetings in his house. Political analyst Amer al-Sabayleh told Al-Monitor the envoy has arranged visits by Jordanian supporters to Damascus in a stark challenge to the authorities in Amman.

By declaring him persona non grata, Minister of Foreign Affairs Nasser Joudeh insisted that the action was taken against Suleiman himself and had nothing to do with Jordan’s policy on Syria. Joudeh said Syria can nominate a new ambassador anytime.

But while the expulsion was predictable, and in the view of many overdue, pundits raised questions about its timing and whether it was one of a number of steps that Jordan was about to take against Syria. For starters, the move came a few days after the launch of an annual multinational military exercise in the Jordanian desert called “Eager Lion.” Jordanian officials insist that the two-week operation involving mostly anti-Assad states — such as Turkey, the United States, France, Britain, Saudi Arabia and others — has nothing to do with the crisis in Syria.

Despite Syrian accusations that Jordan is involved in US-backed training of anti-regime fighters and in facilitating the passage of weapons to rebels, the authorities here have always denied such claims. There are US military personnel in the kingdom associated with manning a number of Patriot anti-missile batteries that Jordan had requested two years ago. And official sources told Al-Monitor that Amman had resisted pressure from Gulf countries to allow weapons to pass through its borders with Syria to rebels fighting the regime. However, Western sources and Syrian rebels have acknowledged the existence of a joint command center, operated by US, Jordanian and Arab officials, focusing on Syria and overseeing the supply of weapons and logistical information. Jordanian officials have always denied the existence of such a center, but the media alleged that US Secretary of Defense Chuck Hagel had visited a secret command center north of Amman earlier this month.

While Jordan is a member of the Friends of Syria group and has voted in the UN Security Council for a resolution to refer war crimes in Syria to the International Criminal Court, it had always maintained that a political solution should be found to the Syrian crisis. Unlike other enemies of Assad, Amman has kept the Syrian Embassy open and recently allowed Syrians in Jordan to participate in the presidential vote against popular calls not to do so. King Abdullah has been critical of the Syrian regime’s actions and has warned of dire political and humanitarian consequences on the region, but Jordan has never openly called for Assad’s departure.

Official sources have rejected speculations that Suleiman’s expulsion was a prelude to taking further steps to escalate tensions between Amman and Damascus. Jordan has no ambassador in Syria and the head of mission had been summoned to Amman weeks earlier. But the border point remains open although fighting in the southern governorate of Daraa has now erupted. There have been calls from deputies on Jordan to close its borders permanently in fear of a new wave of Syrian refugees. There are already over one million Syrians in Jordan of which 600,000 are registered with UN agencies as refugees.

On May 29, the authorities denied reports that the border crossing point, Jaber, was partially closed and blamed delays on problems on the Syrian side. There have been reports that the Free Syrian Army (FSA) had taken over border points with Jordan. If this is confirmed then Jordan might respond by closing the borders.

In recent weeks, the Jordanian air force had intercepted and attacked vehicles trying to cross illegally from the Syrian side into the kingdom. While the authorities never disclosed the identity of the intruders, one diplomatic source in Amman told Al-Monitor that the April 17 incursion involved members of the Islamic State of Iraq and al-Sham (ISIS). Jordanian members of ISIS have made direct threats to King Abdullah in YouTube video clips that went viral.

A former government minister told Al-Monitor that Jordan realizes the war in Syria will go on for a few more years, and that neither the regime nor the rebels can win in the short term. In such a scenario, the government in Amman is keen to keep a bare minimum of diplomatic relations with Damascus.

Official sources said that Jordan is now keen on defending its borders against possible incursions by ISIS or Jabhat al-Nusra fighters. They deny reports that Jordan will have a role in an alleged campaign to wage an attack on Damascus from Daraa. In addition, they say that any “qualitative weapons” the head of the Syrian National Coalition, Ahmad al-Jarba, talked about will not pass through Jordan. They refused to comment on news that the US administration has decided to train moderate rebels somewhere in the region.

Suleiman’s expulsion, which has angered Damascus, is not a watershed in Jordan-Syrian relations, one official told Al-Monitor. It is a limited move against one man and not a challenge to relations with Syria. Mousa Ishtaiwi, head of the Jordan Center for Strategic Studies, told Al-Monitor that it is not in the interest of Jordan or Syria to escalate tensions at this sensitive stage of the Syrian crisis. It appears that for now, Jordan is trying to steer a middle course, one that will bring the least damage to an already tense situation.