A look at the Middle East issues Congress will be addressing the week of May 19. 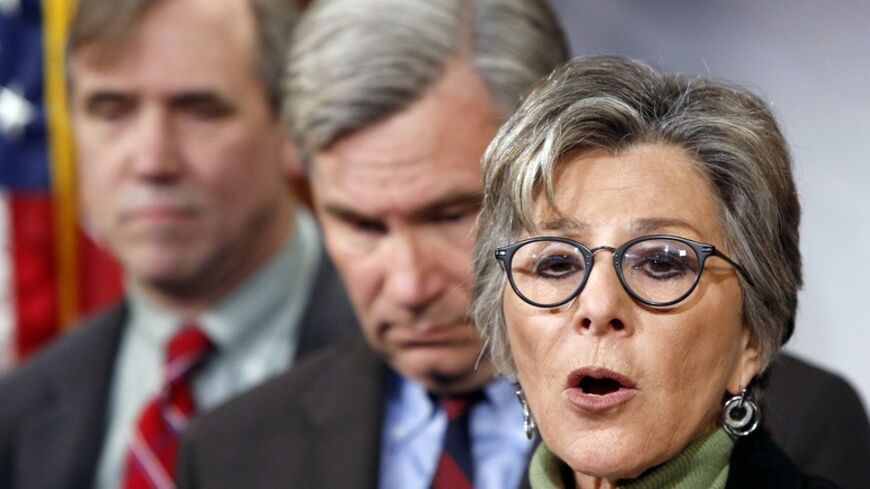 US Sen. Barbara Boxer, D-Calif., leads a news conference to draw attention to climate change at the US Capitol in Washington, Jan. 14, 2014. - REUTERS/Jonathan Ernst

Boxer is expected to offer an amendment during the May 20 mark-up that would nix language requiring the Department of Homeland Security to offer Israel visa-free travel once it has “made every reasonable effort, without jeopardizing the security of the State of Israel, to ensure that reciprocal travel privileges are extended to all United States citizens.” Also removed: a mandate that the administration exempt Israel from the requirement that its visa refusal rate dip below 3% before it can be admitted (Israel’s current refusal rate is 9.7%).

Instead, the new amendment includes a sense of Congress that Israel should be admitted into the program once it has complied with the program’s requirements. It also authorizes — but doesn’t require — that the country be admitted with a refusal rate as high as 10% as long as it has complied with all other provisions, “including extending reciprocal privileges to all Americans without regard to race, religion, national origin, or ethnicity.”

The original language was modeled after a stalled effort by Rep. Brad Sherman, D-Calif., that has provoked an uproar among Arab-American groups and held up action on Boxer’s bill since it was introduced in March of last year. Groups such as the Arab American Institute argued that this would have institutionalized what they call lsraeli discrimination against visitors of Arab background.

While the visa provision has attracted the most scrutiny, the bill is much broader and notably allows for the continued transfer of surplus armor, artillery, automatic weapons ammunition, missiles and other munitions to Israel; directs the secretary of commerce to take steps to make Israel eligible for a Strategic Trade Authorization (STA) license exemption for certain items subject to export controls; authorizes the president to provide assistance for cooperation in the fields of energy, water, homeland security, agriculture and alternative fuel technologies; and directs the president to report to Congress on the feasibility and advisability of establishing a joint United States-Israel Cyber Security Center.

The House passed its version of the bill in March, on a lopsided 410-19 vote. It includes a simple statement of policy declaring: “It shall be the policy of the United States to include Israel in the list of countries that participate in the visa waiver program under section 217 of the Immigration and Nationality Act (8 U.S.C. 1187) when Israel satisfies, and as long as Israel continues to satisfy, the requirements for inclusion in such program specified in such section.”

In other news, the House is expected to take up the annual defense authorization bill this week. Lawmakers have until 10 a.m. on May 19 to file their amendments with the Rules Committee, which meets May 20 to decide which amendments are in order. Already, House Republican Israel Caucus co-chairman Peter Roskam, R-Ill., has filed an amendment requiring the president to report to Congress on whether the administration is doing all it can to transfer “aerial refueling platforms, bunker-busting munitions, and other capabilities” that Israel would need to “remove existential security threats, including nuclear and ballistic missile facilities in Iran, and defend its vital national interests.”

The legislation is modeled after a similar amendment that Roskam got into the National Defense Authorization Act (NDAA) last year, but got dropped when it was merged with the Senate version. A Roskam staffer said the congressman hopes to find a senator to bring up his amendment on the Senate floor.

The Senate takes up its version of the bill next week, starting with subcommittee mark-ups on May 20 followed by a full committee mark-up on May 21-22, which will be closed to the public. Of particular interest: whether the Senate will follow the House’s lead on laying out conditions for a nuclear deal with Iran and how committee chairman Carl Levin, D-Mich., will take into account the Syrian opposition’s request for training and equipment, as Al-Monitor first reported last week.

On May 21, the Senate Foreign Relations panel holds a hearing on the “Authorization for Use of Military Force after Iraq and Afghanistan.” Testifying will be Pentagon General Counsel Stephen Preston and Mary McLeod, principal deputy legal adviser at the State Department.

On May 21, the House Foreign Affairs panel on the Middle East and North Africa holds a hearing with nongovernmental organizations about the humanitarian crisis in Syria, and what more the United States can do about it.

And on May 22, the subcommittee holds a hearing with think-tank types on the “deepening rifts and emerging challenges” inside the Gulf Cooperation Council (GCC). The GCC is comprised of Saudi Arabia, Qatar, Bahrain, Oman, Kuwait and the United Arab Emirates.

Also on May 22, the committee’s human rights panel examines US efforts to hold accountable countries of particular concern when it comes to religious freedom, notably Egypt, Iran, Iraq, Saudi Arabia and Syria. Robert George, chairman of the US Commission on International Religious Freedom, is slated to testify.