Impoverished south Tel Aviv residents felt like there had been a death in the family the day after the Bnei Yehuda soccer team suffered a defeat that relegated it to Israel’s second-tier National League. 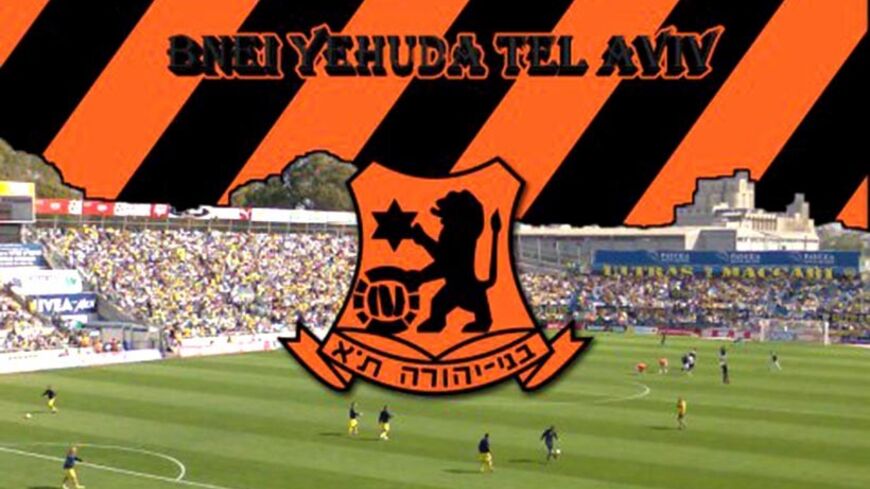 The Bnei Yehudua Tel Aviv F.C logo is seen as they play on the field. - freesoccerwallpapers.wordpress.com

On May 9, the night before a decisive soccer match, Tel Aviv's Hatikva neighborhood was consumed with paralyzing tension. It was a Friday night, so prayers for victory were offered at the local synagogue for Bnei Yehudua Tel Aviv F.C., so the team could remain in the Premier League. It's almost certain that if life had been any different in this part of southern Tel Aviv, the local soccer team would not have become the center of life for so many thousands of residents, most of them Yemeni Jews.

Hatikva has always been the poorest, most derelict neighborhood of the bustling metropolis. Just a few minutes’ drive separates it from Tel Aviv’s thriving downtown area, but too often it seems, the rapid development of the rest of the city skips over this area, ignoring its very existence, as if it were a sad mirage.

Whenever Bnei Yehuda takes to the pitch, the people of Hatikva raise their heads high with a sense of local pride. No matter where the team plays in Israel, thousands of fans make the trek to support it. When the team wins, the lights stay on in Hatikva until the wee hours of the morning, and residents can be heard singing throughout the night. When it loses, they mourn just as they would if a relative had passed away.

On May 10, Bnei Yehuda players took to the field for the final game, which would determine their fate. If they won, they would remain in the Premier League, retaining a place among Israel’s most exclusive group of large, well-funded soccer teams. They would also get the chance to host their two big sister teams, Maccabee Tel Aviv and HaPoel Tel Aviv, in their own arena. True, Bnei Yehuda has always been considered these two giants’ poor little sister, but the fact that it was also in the Premier League lent the sense, imagined perhaps, that it was an equal member of the family.

If, God forbid, Bnei Yehuda lost their last game, they would be demoted to the second-tier National League and play against minor teams from the periphery. The very thought paralyzed all of Hatikva in the days leading up to the decisive match. The day of the big game, fans filled the stadium hours before kickoff. Maybe they wanted to release some tension after so many sleepless nights. They dressed in orange, the team’s color, and chanted victory songs.

During the 90 minutes of the game, Bnei Yehuda held its own against the opposing team from Ashdod. With just a minute or two left, the game was on the verge of ending in a draw, which would have kept Bnei Yehuda in the Premier League. Another second passed and then another. The crowd was about to erupt like a volcano of joy, bursting onto the playing field. Meanwhile, in a stadium elsewhere, two more teams were also fighting for their lives. Of the three teams that had the same number of points, only one would survive.

The tragedy occurred in the 93rd minute, as the crowd pleaded with the referee to blow his whistle and end the game. Just a few seconds before the game ended, however, someone scored a goal in the other stadium, determining that Bnei Yehuda would be demoted to the second-tier league. The players laid on the grass and sobbed, as if their whole world had come crashing down around them.

It was already well after midnight, but the grief-stricken fans could not bring themselves to leave the stadium. Their only status symbol had fallen in front of them, leaving them orphaned. They were so distraught, they completely lost control, cursing and smashing everything in their path. Dozens of police officers tried to put a halt to the melee, but even they felt the fans’ frustration.

The neighborhood was in a state of mourning the next day. I walked down the main street and saw brokenhearted people everywhere. “If Bnei Yehuda isn’t in the [Premier League], then there is no soccer in Israel,” said Gideon, owner of a shoe store on the main drag. “Here in the Hatikva neighborhood, everything revolves around soccer. If you take soccer away from this neighborhood, there is no neighborhood. There’s no reason to live. It’s all we had, and they took it from us.” Shoppers in his store recalled the magical year Bnei Yehuda won the national championship as if it happened only yesterday.

It was 1990, an annus mirabilis for Hatikva. Even today, children are raised on the ever more distant memory of that wonderful year, while their elders remain captive to the euphoria that was felt throughout the poor neighborhood when its team won the national title. “I’ve seen plenty of happy spectacles in my life,” recalled Gideon, “but I’ve never seen people go that crazy. People were crying. They walked around with tears of joy in their eyes. They barely had enough to eat, but they were happy. We live for moments like that. What else is there in this neighborhood besides that? Look around you. All you see is poverty. All we have is misery.”

The last few years have not been good for the Hatikva neighborhood. The two decades of rapid development that transformed Tel Aviv’s skyline, downtown, and northern neighborhoods beyond recognition barely left a mark on this southern community. It seems as if time had stopped in Hatikva (which means “hope” in Hebrew). The neighborhood still consists of narrow roads and homes that haven’t had a facelift in a very long time. The main boulevard is crammed with tiny shops that sell shoes, fabric, spices and foodstuffs. Local bazaars sell clothing at bargain basement prices. The high percentage of elderly residents is noticeable, expecially when compared to the scarcity of young people.

On the day after the team was demoted, most local residents wore black as a symbol of mourning. In a neighborhood where the local soccer team is like a close relative in every way, the team’s demotion from the Premier League was almost as tragic as a death in the family. Some people even hung black mourning flags from their windows and rooftops. Others asked what reason they had to go on living in the neighborhood. A few expressed their concern that the team’s owner would end up selling the team. That, however, is not what longtime owner Moshe Damaio was thinking. “I love Bnei Yehuda and Bnei Yehuda only,” he told fans who circled around him the following day in the center of the neighborhood. “There’s nothing else I love in my life.”