On eve of elections, Iraq's waters become weapons of war

While confrontations continued in various regions of Iraq between armed militants and the government, both sides have tried to take control of water resources to achieve their interests. 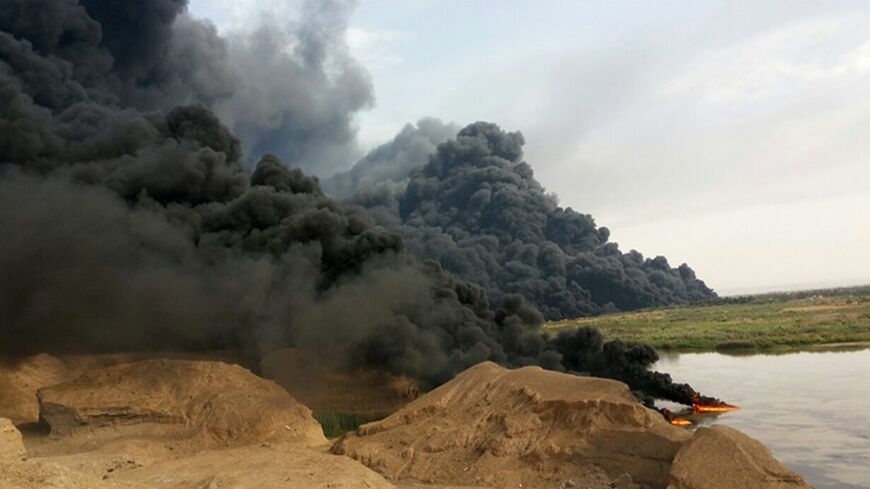 A cloud of smoke rises from an oil pipeline in Tikrit, north of Baghdad, April 17, 2014. Attacks on pipelines have caused major oil leaks into the Tigris River and a shutdown of water treatment facilities in Baghdad. - REUTERS

The problems faced by Iraqi citizens are increasingly intensifying, as they continue to suffer from government mismanagement and violent terrorist groups that have become prevalent in all parts of the country. In the latest developments, the government and terrorist groups have been using water as a tool in the conflict. Ironically, Baghdad has been divided in two starting a few days ago: One part is suffering from water scarcity, while the other part is flooded.

The idea of a water war started in Anbar, where army operations gradually turned into irregular wars that were not decided in the favor of either side, given the length and type of the ongoing fighting there. Some of the leaders of the military operations in Anbar came up with this idea a month ago, when the army took control of the Haditha Dam (240 kilometers, or 150 miles, west of Baghdad) to flood the areas where the insurgents were present. This flooded some residential areas, while water has been cut off in other areas in Anbar.

This also pushed terrorist groups to use the same tactic. They retaliated in the same way when they closed the Fallujah Barrage in early April to achieve two goals. First, they wanted to flood the areas near Fallujah that were under the army control. Before long, the army was no longer able to advance and continue military operations. Second, they wanted to impose restrictions on the southern Shiite-majority provinces by cutting off water to them. As a result, Najaf province suffered from a great water shortage, which led the local government to take urgent actions to avoid water cuts in the city.

In another development within the same context, two weeks ago some terrorists carried out bomb attacks targeting gas pipelines that are linked to Tikrit city (160 kilometers, or 100 miles, north of Baghdad). This led to heavy contamination of the Tigris River, while large patches of oil were visible on the water surface and large fires broke out on the banks of the river from Tikrit to areas near Baghdad.

When pollution reached the waters of Baghdad, the Secretariat of Baghdad declared on April 23 that it would cut drinking water to the residential areas in Baghdad, because treatment plants were no longer able to filter contaminated water properly. Many eyewitnesses told Al-Monitor about the large spots of oil pollution in different areas of the Tigris.

Meanwhile, the western areas of Baghdad and its suburbs, such as Abu Ghraib, sank beneath the waves of great floods while terrorists controlled the Fallujah Barrage. This led to the displacement of 700 families, while six villages have been totally flooded.

Members of parliament and local officials issued various estimates regarding the number of victims and the extent of losses, foreboding a great humanitarian disaster. Ten thousand homes were demolished and damaged, and more than 60 schools and 29 polling stations have been totally flooded.

There have been talks about the number of dead and traumatized. However, the exact figures have yet to be announced. Many experts showed great fear about increased losses in the coming days, as floods were likely to reach the regions of Al-Shu’ala, al-A’amiriya and al-Jihad neighborhoods and other regions close to the Baghdad airport during the coming days, unless the Fallujah dam comes under control.

The United Nations declared the Abu Ghraib region a disaster area. The special representative of the UN secretary-general in Iraq, Nikolay Mladenov, said that the UN was fully prepared to provide assistance to the thousands of families that are affected by the floods in Abu Ghraib and Fallujah.

Perhaps the war water is not yet in full swing, since the parties to the conflict have more opportunities to manipulate the health and lives of Iraqi citizens by shutting down or blowing up dams, or even poisoning waters. This will further complicate the conflict, pushing away rational solutions and leading to greater losses.