Syrian graffiti artists seek to reclaim the spirit of the revolution by taking on both the Assad government and radical Islamists. 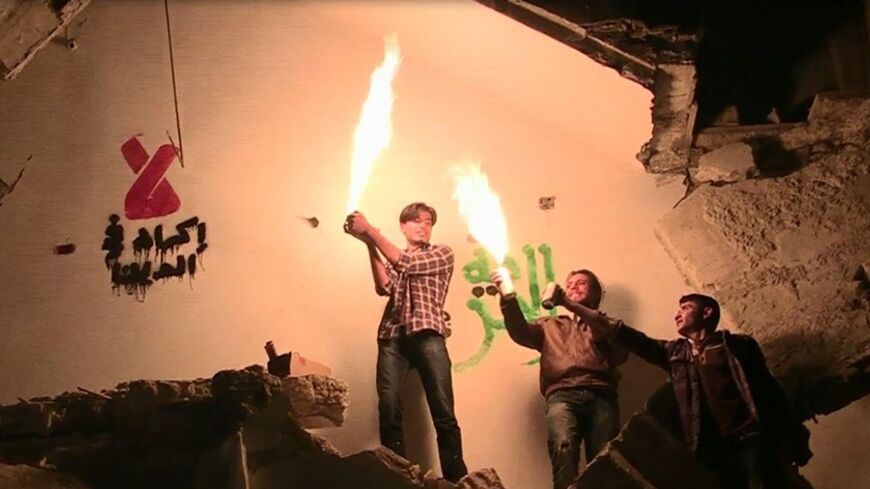 Graffiti artists light up the night with their spray cans as they paint slogans condemning extremism and violence in Kafr Nabl, March 23, 2014. - Transterra Media 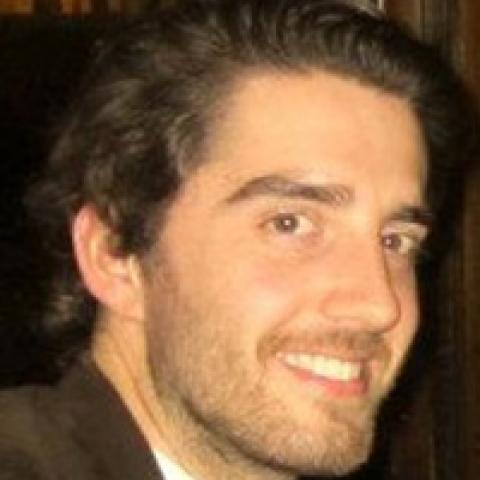 "This [graffiti] is an opportunity to gain back the public space that was stolen from us by the militias, formerly occupied by the regime with the pictures of Bashar and Hafez al-Assad, and now taken by Quranic verses [of ISIS]," professes Syrian activist Amer Mattar.

Amer is a member of Shera’ (Arabic for "The Street"), a group of young activists in the northern Syrian town of Kafr Nabl who are using graffiti as a way to reclaim a revolution they feel has gone horribly awry.

For the past few months, Amer and his colleagues in Shera’ have been spray-painting slogans on the walls of Kafr Nabl. The slogans are taken from the Quran and are intended to convey a tolerant, humanist Islam that runs counter to the doctrine of ISIS and the violent practices of the Assad government.

"We are trying to spread our ideas and to confront religious extremism with quotes from the Holy Quran like ‘Freedom without a doubt,' ‘No religion is to be against one's will,' or ‘How dare you take people as slaves, after they were born free,' a quote from Caliph Omar Ben Khattab," explains Amer.

Like previous activist campaigns in Kafr Nabl, the graffiti activities of Shera’ are directed at the political players in the Syrian conflict. However, unlike previous campaigns, this new campaign is also directed at the people of Kafr Nabl as a means of changing attitudes and mentalities toward the events in Syria. According to Shera’ founder Nashwan Marzook, they are not only providing a third option in the war, but also trying to renew faith in unarmed resistance.

“This kind of work will restore the people's confidence in civil resistance after losing the weapon of hope,” Marzook says.

From Assad to ISIS

When the initial uprising began in Syria, Kafr Nabl strongly supported the opposition and the town fell quickly under opposition control.

As the uprising degenerated into violence, Kafr Nabl was attacked by Assad’s air force and ruthlessly bombed. This instilled a fear in much of the town’s population that the simple act of peaceful protest could have them killed. Regardless, many enterprising young activists in Kafr Nabl began making banners in English with messages that expressed disdain at the inaction of the international community to come to the aid of the Syrian uprising. They took photos of themselves standing behind the banners and circulated them on social media as a way to keep a human face on the Syrian uprising. These photos gained international attention, but did little to save the town from the civil war engulfing the country. Kafr Nabl was pummeled by Assad’s forces and many in the town lost faith in peaceful resistance.

Things took a terribly unexpected turn in December 2013, when ISIS stepped up its control of Kafr Nabl and raided the headquarters of activists in the town, destroying their computers and cameras, and arresting many.

"The Islamists came to town to fight jihad [holy war],” explains Amer Mattar. “We [graffiti activists] had to go underground in order to keep our activities going. We would go tagging and painting walls by night and they [ISIS] would answer back by spraying our tags with religious quotes. All they wanted was verses from the Quran [on the walls of the town]. But we kept on [spray painting], so they fought us. They arrested my brother and put him in jail. They arrested many civil activists."

Mohammed disappeared while filming battles between the Free Syrian Army and ISIS. The only thing found was his charred and destroyed camera. When ISIS was driven out of Kafr Nabl in February and its former prisoners released, Mohammed was nowhere to be found. ISIS has stated that Mohammed is in its custody and activists believe he is being held in the ISIS stronghold of Raqqa.

The combined experiences of living through the violence of both Assad and ISIS has driven Kafr Nabl’s activists to find a new path within the complexity of the Syrian war. Disenfranchised by the violent competing ideologies of the civil war, many Syrians are questioning if the revolution itself is dead.

The word "revolution" has always been contentious within the context of the Syrian war. For many supporters of President Bashar al-Assad, the war is not a revolution, but a destructive terrorist campaign bent on destroying the fabric of Syrian society. For those opposed to Assad, it is a desperate attempt to obtain long sought-after freedoms denied to millions of Syrians for decades. The word "revolution" has also become contentious within the opposition itself, as many feel the revolution is dead and what is left is a civil war that is destroying Syria.

“I think the word hijacked best describes what has happened to the revolution,” he explains.

“When the revolution began, it appeared to all that the regime would fall in a matter of weeks, or at most a matter of months. However, the circumstances and chaos eventually became a war funded by foreign powers and fought by local groups with their own scores to settle on the ground.”

While Marzook and Shera’ single out ISIS and Assad in their speech, for Marzook the real enemy is the continuing violence.

“Three years of war [have] proven that the weapon failed to bring down the regime and instead drowned Syria in an endless bloody war. ... This kind of graffiti resistance is a risk and attempt to restore the civil space that was stolen by that violence.”

"There has been a militarization of the conflict and we are against that. We have kept faith in our principles of obtaining our freedom and our honor by peaceful protests. We don't want any weapons."

While Kafr Nabl’s path of civil resistance remains small and localized, it is a tiny window into an alternative path for a country buried under the violence of war. The actions of Shera' may be small, but they give voice to sentiments still held by many Syrians who are too often silenced by conflict.