The Palestinian Central Council, the PLO's second-highest executive body, is expected to make a decision on the extension of the peace talks within the next 10 days. 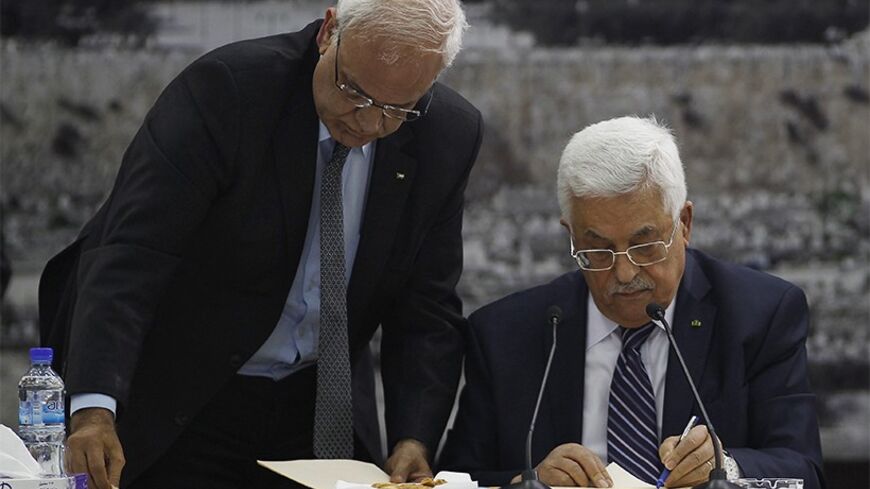 Some of the most important decisions that the Palestinians need to take are expected to come out of the Palestinian Central Council (PCC), due to meet on April 26.

The Palestine Liberation Organization’s (PLO) second-highest legislative body will meet in Ramallah to decide on the peace process and on presidential and parliamentary elections, according to Hanna Amireh, PLO executive committee member.

A last-minute effort is being made by the Ramallah-based PLO leadership to encourage Gaza-based pro-Hamas legislators to attend this important meeting, even though the Islamic Resistance Movement (Hamas) has not yet officially joined the PLO. A high-level delegation from the West Bank will visit Gaza on April 21.

The PCC meeting will take place three days before the end of the nine-month US-led peace talks. This timing is aimed at giving Palestinian President Mahmoud Abbas maximum negotiating leverage. Direct talks have continued despite the Israeli failure to release the remaining prisoners and the signing on by the state of Palestine to 15 international treaties and conventions. The talks have focused on the extension of the peace talks for another year or at least until the end of 2014.

The PCC is usually called to approve a major change in strategy. If Palestinians intend not to extend the peace talks past the end of April, Abbas needs the widest public support possible. He will be under immense economic and political pressure in the event that he walks away from the talks, and therefore it is expected that the council will support Abbas and share the decision.

The Palestinian public is already beginning to encourage the PLO leadership to suspend the talks. In an open letter to Abbas, Palestinian intellectuals and activists from inside and outside the occupied territories called for a suspension of the peace talks, which the signatories argue have been fruitless. The letter initially signed by 108 leading Palestinians concludes: "We therefore believe that the time has come, once and for all, to declare a final break from the pattern of endless negotiations established more than two decades ago at Oslo, which has only provided time for Israel to annex and colonize more territory and impose crippling restrictions on Palestinian life."

The letter and the anticipated meeting of the PCC will also need to address another crucial point that has been hurting Palestinians. The division between the Gaza Strip and the West Bank and between the PLO and Hamas will also be raised, according to PLO officials. While it is unlikely that Hamas will attend this meeting, it is understood that a decision regarding holding presidential and parliamentary elections is crucially needed. The PLO has resisted holding any elections until the reconciliation process is implemented, but sources have told Al-Monitor that elections will need to be held even if they are limited to the West Bank.

The four-year term of Abbas, who does not plan to run, expired in 2009. At that time, the same PCC held a meeting to extend Abbas’ term due to the split with Gaza until elections can be held in both the West Bank and the Gaza Strip.

The term of the current nonoperational Palestinian Legislative Council lapsed in 2010.

Abbas has little to worry about in regard to the PCC. His own Fatah movement and other PLO and independent allies hold a clear majority, thus allowing Abbas to use the council in any way he chooses. If he calls on the council to approve his decision not to renew the talks, he will have little trouble getting near unanimous approval. However, if a deal is struck to further extend the talks by Abbas using his weight in the PCC, the president will have some serious convincing to do of the public.