Iraqi Prime Minister Nouri al-Maliki has diversified his electoral lists to have a larger share of the votes in the upcoming parliamentary elections. 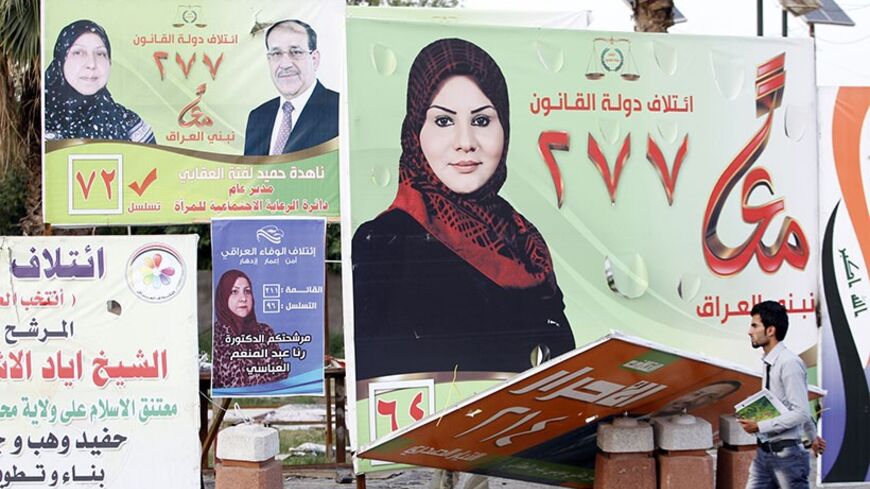 A man walks past election posters of Iraqi women candidates in Baghdad, April 24, 2014. As Iraq's general elections draw closer, both men and women are vying for seats in the country's parliament. - REUTERS/Thaier al-Sudani

With less than a week to go before the April 30 Iraqi parliamentary elections, the Iraqi street has turned into a competitive market for political parties, each of which is trying to win the confidence of voters to obtain the biggest share of the pie.

The competing parties have resorted to various methods to win votes. Some of these methods are unfair given the absence of clear rules organizing the elections and campaigns.

Iraqi Prime Minister Nouri al-Maliki smartly tricked the groups that have been critical of him. He diversified the electoral lists supporting him, so as to create a seemingly competitive electoral atmosphere and obtain the largest share of votes from supporters and opponents alike. Following the announcement of the results, these lists will form the largest coalition qualified to form a government, according to the provisions of the Iraqi Constitution.

Maliki adopted the same method in previous elections on a smaller scale. Different Shiite entities were formed after the 2010 elections to defeat the Iraqiya List, which received the largest number of votes. There is still constitutional ambiguity regarding the legitimacy of this method. The question arises: Which is eligible to form a government — the coalition with the most votes or the coalition formed after the completion of the elections? Previous elections have made the second scenario an acceptable tradition.

The following groups have participated in Maliki's State of Law Coalition: the Islamic Dawa Party; the Badr organization, which is associated with the Iranian Quds Force and led by current Minister of Transportation Hadi al-Amiri; and the Independent Bloc, led by Deputy Prime Minister for Energy Hussain al-Shahristani. The coalition includes well-known members of parliament (MPs) and political figures, including former national security adviser Mowaffak al-Rubaie.

New blocs have emerged, raising photos of Maliki alongside photos of their candidates, such as the Movement for a Fair State, led by former Tourism Minister Qahtan al-Jubouri, and the Gathering of Comprehensive Renaissance, led by Fadel al-Bahadli.

Add to this the numerous electoral blocs that stood by Maliki's policies throughout his eight years in office, most notably the Sadiqoon bloc, affiliated with Asaib Ahl al-Haq, which is loyal to Iran. This bloc was a militia before becoming a political entity led by Sheikh Qais al-Khazali, who split from the Sadrists.

The National Reform Movement, led by former Prime Minister Ibrahim al-Jaafari, is part of the Dawa Party, of which Maliki is a member. The party took part in the National Iraqi Alliance during the last elections in 2010, knowing that the alliance comprises the majority of Shiite parties. Other political parties split symbolically from the Dawa Party but still shared general politics and agendas.

Other coalitions moved away from the State of Law to form alliances with other entities in case the coalition loses. Yet, the policies of these emerging entities are similar to the State of Law's, and their leaders have allied with Maliki over the past eight years. These entities include the Islamic Virtue Party, which brokered the controversial Jaafari personal status law, and the Iraqi Loyalty Coalition, led by current MP and former member of the Dawa Party Izzat al-Shahbandar.

Other entities have economic interests with the State of Law Coalition, particularly the Iraq Coalition led by businessman Fadel al-Dabbas. Dabbas owns the United Bank of Investment in Iraq, which brokered the deal for sonar explosive-detection devices, which British authorities later revealed to be dummy devices. Dabbas bought these devices for the Iraqi government from a fraudulent British trader for tens of millions of dollars. This deal was carried out during the State of Law's rule.

Maliki has also preserved his historical relationships with Sunni parties, like the al-Arabiya List of Deputy Prime Minister Saleh al-Mutlaq. Ten political entities further announced their affiliation with the State of Law Coalition.

MP Haidar al-Mulla revealed that these Sunni entities were formed through direct financial and organizational support from Maliki. These lists comprise “some reputable figures who do not know about the corrupt financial sources of these entities,” according to Mulla.

Ultimately, Maliki’s election plan hinges on the votes he directly wins; the entities affiliated with him could just as quickly change their inclinations if one of Maliki's rival coalitions wins.