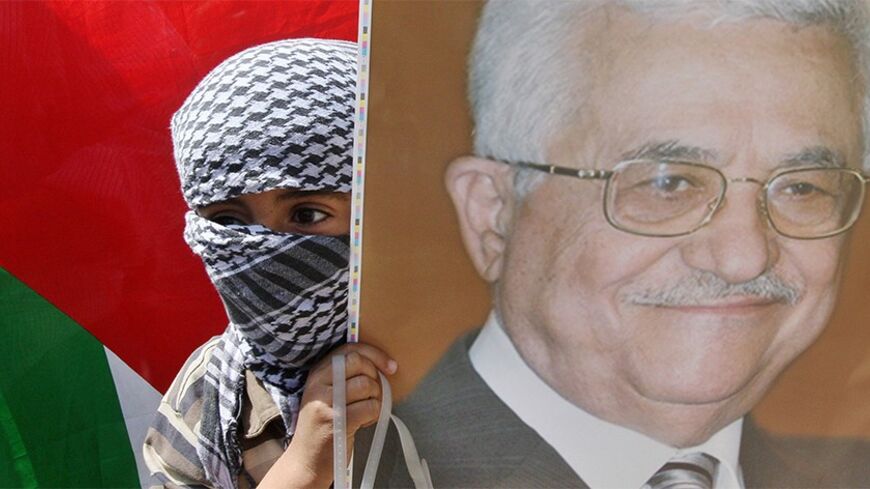 A masked Palestinian boy holds a picture of Palestinian President Mahmoud Abbas during a Fatah demonstration in support of Abbas in the West Bank village of Kofr Qadoum, April 4, 2014. - REUTERS/Abed Omar Qusini

No sooner had Palestinian leader Mahmoud Abbas signed letters of accession to 15 international treaties than Israel began spinning various myths to explain how this came to be. Israeli officials and commentators were in shock while trying to justify how their Palestinian partner could do something without Israel's prior approval. Abbas appears to have caught the Israelis off guard by signing documents that allow Palestine to join UN bodies and treaties to regulate the rights of a state under occupation, the workings of diplomats and the conventions protecting the rights of women and children.

Few remember that the issue of releasing Palestinian prisoners was an idea introduced late in the process of resuming peace talks. The original idea was that Israel agree to a framework for negotiations and suspend settlement activities. Israel refused, however, to accept that the aim of the talks was to reach a two-state solution based on the 1967 borders. This led to a search for a side, confidence-building agreement. To get past this deadlock, a quid pro quo was suggested: 104 Palestinians imprisoned since before the Oslo Accords — and whose release had already been agreed to in the 1999 Sharm el-Sheikh Memorandum — would be released in return for the Palestinian leadership suspending following up on Palestine's recognition at the United Nations as a non-member observer state and ascending to various international bodies and treaties.

Instead, Israeli pundits argued, almost in unison, that the Palestinian president’s decision was the result of Abbas being afraid to make decisions for peace, his waning popularity, his fear of Mohammed Dahlan taking his position and Palestinians being drunk with power. Abbas’ alleged fear of decision making is argued because of his refusal to become a Zionist and adopt the Israeli narrative that Israel is the national state of the Jews. Even Israel’s staunchest ally, the United States, understood the Palestinian position. Changing the goal posts and adding new conditions to an already crowded agenda does not make someone refusing to play that game “afraid of making hard decisions.”

When it came to the issue of Palestinian refugees and the right of return, arguably one of the toughest issues, Abbas has shown real statesmanship. The Palestinian president, a refugee from Safad in Israel, had no problem announcing publicly that within a peace deal he did not intend to return to his birthplace, and as late as February he told visiting Israeli students that Palestinians do not wish to flood the state of Israel with refugees. Abbas took a lot of flak for both statements.

As to the claim that Abbas’ decision stems from his “waning popularity,” two independent polls showed Abbas polling quite well less than a month before the April 1 letter signings. An AWRAD Poll conducted March 10–11 put Abbas’ approval rating at 58%. Another poll, conducted by the Palestinian Center for Policy and Survey, indicated that if national elections were held that day, Abbas would win 53% of the vote.

The Palestinian negotiators are not a team “drunk with power,” but a team that is cognizant of the effects of a 20-some-year cycle of spinning their wheels trying to end more than six decades of conflict. In the preamble of UN Security Council Resolution 242, the world community recognizes unanimously the “inadmissibility of the acquisition of territory by war.” Demands for the return of the Church of the Nativity deportees, the lifting of the siege against Gaza and the opening of Palestinian institutions in Jerusalem are actually modest requests by the Palestinian negotiators.

Instead of agreeing to fulfill its own pledge to release the last batch of Palestinian prisoners, and make realistic proposals in the peace talks, the Israelis are adopting a pre-emptive sports strategy: the best defense is a good offense. In reality, however, the attacks against the Palestinian leadership and negotiators do not hold water, and the one party that counts, the Americans, knows that well, even while publicly placing blame on both sides.