Israel is using the release of Palestinian prisoners as a means to keep the Palestinians in peace talks that are going nowhere. 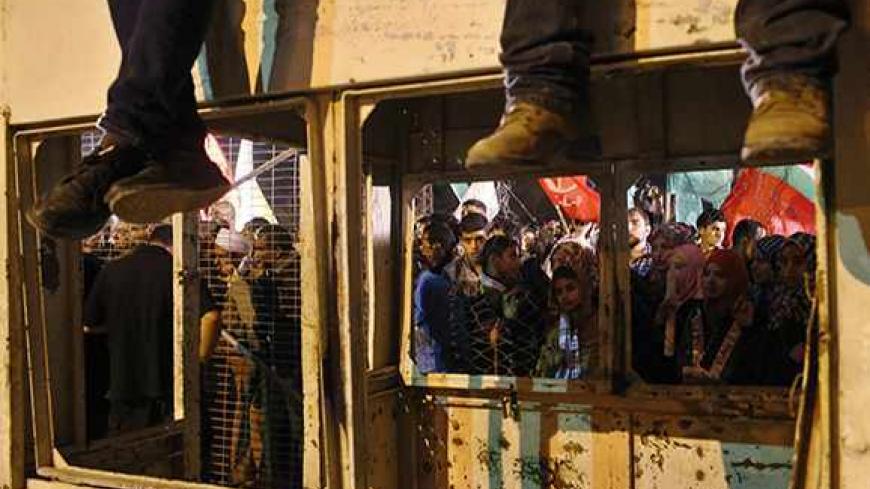 Palestinians wait for the release of prisoners from Israeli jails, near Erez crossing between Israel and northern Gaza Strip, Oct. 30, 2013. - REUTERS/Mohammed Salem

One of the problems of political negotiations without a clear reference point is that the parties, especially the stronger party, can change the rules of the game at will. And the absence of a neutral referee on the field allows such a strong party to get away with regularly moving the goal posts.

This is exactly what is happening in the Palestinian-Israeli talks. It began with the Israelis refusing to accept the principle of the 1967 borders and suspend settlement expansion as a reference point, and continued with Israeli negotiators banning US officials from entering the negotiation room.

Palestinians and Israelis have agreed to keep the talks going for nine months. For Israel, talks could go on for nine years as long as the talks masqueraded their continued occupation, but for Palestinians, this meant talking while Israel continued to take away Palestinian lands intended for the future Palestinian state.

The agreement by Israel to release pre-Oslo prisoners in four stages during the nine-month period sealed Israel’s assurance that Palestinian negotiators would not walk out of the talks for any reason whatsoever. Even though the prisoner release was a previous Israeli commitment in the 1999 Sharm el-Sheikh Agreement, the Palestinian side also agreed not to pursue any further UN membership attempts during the nine-month negotiations period.

At the time of the agreement, Palestinian legislator and nonviolent leader Mustafa Barghouti predicted that succumbing to Israeli demands amounted to the potential of Israeli political blackmail. This turned out to be a true prophesy. Whether as part of a secret deal or not, Israel implemented further settlements on the very day that they agreed to release the ageing Palestinian prisoners.

By dividing the release of the 104 prisoners into four stages, the last of which would be at the end of the nine-month period, Israel has ensured the neutralization of the Palestinians’ only significant negotiating weapon, that of walking out of the talks.

While Palestinians badly want the talks to succeed, they find themselves trapped in an unenviable position: If they walk out, the remaining prisoners would not be released; if they stay in the talks, Israel could both claim to be involved in peace talks while at the same time carry out acts that are in violation of international law.

This is where the need for US officials to be listening in on what happens inside the negotiating room would have been important. But alas, even this rather neutral and innocuous request from the sole sponsor of the peace talks was also taken away from the Palestinians, thus allowing Israel to get away with doing nothing of substance in the talks while claiming that they are involved in peace negotiations.

While the actual discussions are held in secret, much can be deduced from public statements. A simple look at where the talks began and what has been publicly stated in recent days shows a clear retraction. The world was told Israel’s prime minister had agreed in principle to the two-state solution and the proof of this agreement was Benjamin Netanyahu’s conditional acceptance as stated in his Bar Ilan speech.

His two conditions at the time were that Palestine be demilitarized and that Palestinians publicly accept that Israel is the homeland of the Jewish people. While the first condition violates the sovereign rights of any independent country, some in Palestine were not opposed to it, the other condition was much more difficult, for it violated Palestinian relations with fellow Palestinians who are citizens of Israel.

When the talks began, both sides agreed that the talks would include all permanent status issues such as borders, Jerusalem and refugees. However, as the talks progressed, the Israelis have recanted on their own commitments. Within a period of one week and possibly in preparation for the visit of US Secretary of State John Kerry, Netanyahu publicly opposed any talks on Jerusalem or refugees. At the outset of the Israeli cabinet meeting he stated: “We ascribe importance to the unity of Jerusalem and, of course, to the cancellation of the right of return.”

Two days before Kerry’s arrival, Netanyahu shocked Palestinians and Americans by ordering the construction of a wall on the Jordan Valley, thus destroying any possibility of an independent and contiguous Palestinian state with open borders with its Jordanian neighbor.

If Palestinians cannot talk about the right of return and Jerusalem, what is the meaning of agreeing early on to include them in the core issues to be negotiated? And if there is an Israeli-built and controlled wall on the Jordan Valley, what is the use of even discussing borders and the idea of a separate Palestinian state? A wall on the Jordan Valley will significantly decrease Palestinian support for the two-state solution and move people more toward the concept of the one-state solution, where all people between the Jordan River and the Mediterranean Sea require equal rights in a single democratic state.

The release of the second stage of prisoners has exploded the very essence of serious peace talks that aim to find a reasonable solution to the Arab-Israeli conflict. The American sponsors, who have refused to allow any other side to intervene and have claimed to be honest brokers, have to ensure that the rules of the game are honored and that the goal posts are not changed by the side with the military advantage.