Iran's hard-liners have rejected the wish of famous Iranologist Richard Frye to be buried in Esfahan, despite having had no issue with him under former President Mahmoud Ahmadinejad, who showed support for Frye. 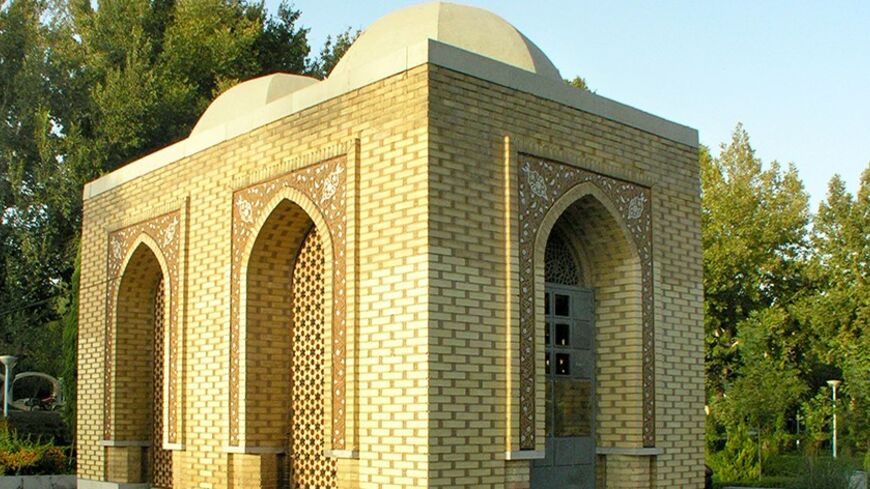 The mausoleum of Arthur Pope and his wife Phyllis Ackerman in Esfahan, seen here Oct. 4, 2008, was defaced in a protest over the potential burial of American Iranologist Richard Nelson Frye in the city. - WikiCommons/Anatoly Terentiev

TEHRAN, Iran — The body of Richard Nelson Frye, the most famous American Iranologist of the past few decades, is still in the morgue. His family is waiting for President Hassan Rouhani’s administration to issue a permission allowing Frye’s body to be buried in the city of Esfahan, the historic city in central Iran, in accordance with Frye’s will. It appears, however, that his burial has given the radicals in Tehran an excuse to restart their anti-West and anti-American campaign.

Last week, Ahmad Salek, the member of parliament (MP) from Esfahan, insulted the Iranologist and called on the president not to let him be buried in Esfahan. He said, “I ask the president and the other officials not to allow the cursed body of Richard Frye, the American and CIA spy, to be buried next to the foul body of (Arthur) Pope who was an adviser to Farah Pahlavi and a dealer of antiques. People of Esfahan will not tolerate such an act and if it happens, Zayanderud (life-giving river) will turn to Morderud (river of death).”

Salek is a cleric and is also the head of the parliament's Cultural Committee. Eight other MPs, mostly from Esfahan, signed a letter addressed to Rouhani repeating Salek’s request.

They were not alone. Mohammad Taghi Rahbar, who was the representative of Esfahan in the eighth parliament, and is currently the temporary Friday prayer imam of Esfahan, also used harsh words in reference to the body of Frye and said, “I don’t know what Esfahan did to deserve this. Why are the officials trying to bury the Western garbage in the city of Esfahan and next to Zayanderud.”

The militia and pressure groups in Esfahan went so far as to deface the tomb of Arthur Pope, Frye’s mentor — who was buried in 1968 in Esfahan — so that their feelings about Frye’s potential burial could be felt.

Pictures show a group of protesters carrying banners, with the words “Ya Zahra” written on them, standing on top of Pope’s mausoleum. They also wrote slogans such as, “The American structure must be demolished” and “Death to America” on the bricks of Pope’s mausoleum.

Many view these statements and actions as settling current political scores. A political analyst in Tehran who talked to Al-Monitor on condition of anonymity said, “The radicals are no doubt playing these games to shame Rouhani’s administration. Leave it to the radical political groups to be this disrespectful to a man who was in love with Iran.”

In 2007, when Frye traveled to Iran following an invitation from the Farabi Organization, former President Mahmoud Ahmadinejad had taken Frye’s hand and had personally helped him get behind the podium. In response to Frye’s request to be buried in Iran, Ahmadinejad had said, “We want you to be in Iran while you are alive. On behalf of the Iranian nation, a house in Esfahan is gifted to you so you can stay there as long as you want.” Rahbar, interestingly, had no objections at the time.

The analyst said that Rahbar is not unique in his sudden disdain for Frye. “I remember that Gholam Ali Haddad-Adel (then speaker of parliament) also praised Frye. Back then, Ahmad Salek was an adviser to Ahmadinejad; yet, he did not seem to have a problem with Frye traveling to Iran or the government praising him. Now, however, it is clear that the efforts of Rouhani’s administration in lessening the tension between Iran and the United States had resulted in the radical forces using any opportunity they have to increase tension between the two governments.”

Reformists, however, have supported Frye’s burial in Esfahan. Reformist newspapers such as Shargh, Etemad, Ghanoon and Armaan all showed their support for the burial taking place in Iran. The newspaper Mardomsalari, which has close ties with the Reformists, even went a step further and wrote an editorial criticizing the events of the previous week and said: “We expect this behavior from those who are used to labeling everyone a spy. However, we expected the moderate administration that claims it wants to restore the honor of Iran and the Iranians in the international arena, to actively take charge of this issue and pave the road for the burial of Richard Frye in Esfahan in accordance with his will, and also to stop any vandalism of the tomb of Arthur Pope, which has initiated a very ugly reflection of Iran in the world.”

Frye was the founder of the Iranian studies chair at Columbia University and Harvard University. He spent more than 70 years of his life studying and researching the history of the Iranian Plateau. He was one of the few remaining Iranologists who belonged to the generation of Arthur Christensen, Arthur Pope, Roman Ghirshman and Albert Olmstead, who established oriental studies in the universities of the world and wrote numerous books about the history, art and culture of Iran.

He did extensive research regarding the ancient history of Iran. He published more than 10 books about Iran, among which the following titles have been translated into Persian: The Heritage of Persia, The Golden Age of Persia, History of Ancient Iran and the fourth volume of the Cambridge History of Iran ("From the Arab Invasion to the Saljuqs"), which was edited by Frye. Frye’s love for Iran was so passionate that Ali Akbar Dehkhoda, one of the most important professors of Persian literature, gave him the title “Irandust” when he was a young man.

Frye lived for many years in Shiraz, Esfahan, Samarkand and Dushanbe and thus was familiar with the region and its people. “He played a great role in increasing the importance of Iranology in the United States and the world,” Khodadad said.

Nonetheless, Rouhani has chosen to stay silent in the face of these radical protesters. Foreign Minister Mohammad Javad Zarif has written a letter to the president’s chief of staff, Mohammad Nahavandian, urging a decision on the moving of Richard Frye’s body to Iran. This letter was viewed by many as tacit support for his burial in Esfahan.

At the same time, the Ministry of Culture and Islamic Guidance has also chosen to stay silent and not to start a conflict with the radical forces in the establishment. Hossein Nushabadi, the parliamentary legal counselor of the Ministry of Culture and Islamic Guidance, said of Frye’s burial in Iran, “Our responsibilities do not include transferring bodies to Iran from other countries, and we have never been directly involved in such matters.”

A member of the board of editors of the newspaper Etemad said, “This is yet another test for Rouhani so he can show us exactly how serious he is about opposing the unlawful activities of the hard-liners.”

The newspaper Javan, which is considered to be a media outlet for the Sepah (the Islamic Revolutionary Guard Corps), published an article in which it warned, using an intimidating tone, that the burial of Frye in Esfahan would result in the exhumation of his body: “Are you going to assign a special unit of the armed forces to protect the tomb of Richard Frye? Or does the poor guy have to wait day and night for the people of Esfahan to come and honorably take him from his tomb next to the Khaju Bridge to someplace where the officials cannot reach, for example one of the gardens in the suburb of Esfahan, and end the controversy?”

It appears that the administration has a tough decision to make. Rouhani can allow Frye’s body to be buried in Esfahan and then deal with the radicals protesting the burial or even vandalizing the body of the famed Iranologist. He can also choose not to interfere in this matter, in which case his supporters will think that he has taken a step backward and it might even result in the administration facing more pressure from the radicals in the future.