Republicans want to block aid to Tripoli over lack of progress in attack probe. 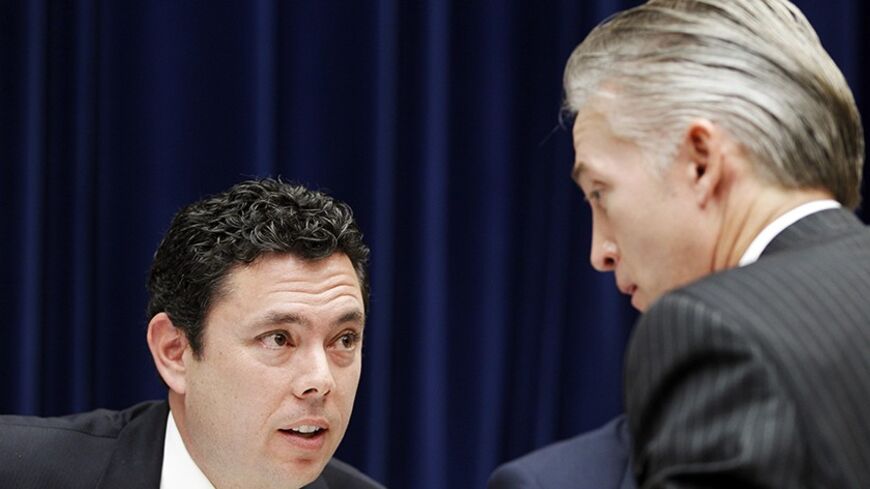 Republican lawmakers are seeking to punish Libya over its failure to bring anyone to justice for the 2012 attack against the US mission in Benghazi.

Congress approved a spending bill earlier this year that ties US aid to the country on progress in the investigation. And House Republicans are threatening to undermine the Obama administration's bid to eliminate Cold War-era visa restrictions that the State and Defense departments have been pushing for since before the fall of Moammar Gadhafi.

The visa restrictions date from 1983 and prohibit Libyans from coming to the United States to engage in flight training, aviation maintenance or nuclear-related studies. The Obama administration argues that the restrictions have strained relations with a potential partner in a strategically vital part of the world — and put a $2 billion training program at risk.

The argument for better relations has failed to impress Republicans as they ramp up their criticism of the Obama administration's response to the attack that killed Ambassador Christopher Stevens and three other Americans ahead of the 2014 midterms.

"To date, no one has been brought to justice for these attacks," House Judiciary Chairman Bob Goodlatte, R-Va., said in his opening statement at a joint hearing on Libya with the House oversight committee earlier this month.

And Rep. Trey Gowdy, R-S.C., the chairman of the House Judiciary panel on Immigration Policy and Border Security, argued that since the visa restrictions were meant to be "punitive," lifting them "would be a reward."

"I understand that some of my colleagues on the other side of the aisle don't want to go back to Benghazi, but it's tough," Gowdy said at the April 3 hearing. "It'd be tough in my district to explain to people why a government that can't help us make a single solitary arrest in 18 months — or a prosecution — would be a government that we would trust to vet applicants to come to this country."

The administration's witness, Assistant Secretary of Homeland Security for International Affairs Alan Bersin, countered that the Libyans wouldn't be the ones doing the vetting.

"Mr. Chairman," Bersin said, "we don't trust the Libyans — nor do we trust any other country — to do the vetting that we're required to do under the law."

Still, Bersin's assurances failed to convince critics of the department's draft regulations to eliminate the restrictions.

"We are looking into possible legislative solutions," a spokeswoman for Goodlatte told Al-Monitor after the hearing, without elaborating.

Bersin has been leading the effort inside the agency to lift the restrictions. In a Feb. 12, 2013, internal memo obtained by Al-Monitor, he argued that doing so would "contribute to the strengthening of US-Libya ties."

"According to the US Embassy in Tripoli, there is a robust plan in place to encourage engagement and educational exchanges in coming years with the Libyan government," Bersin wrote. "DOD is attempting to initiate a program of aircraft sales, pilot training, and ground crew training early this year worth $2 billion, the contracts for which would go to other countries if training could not be conducted in the United States. The Departments of Defense and State have made it clear that absent its rescission, the [regulation] will significantly hamper these efforts.”

He went on to write that the US Air Force sees its C-130 aircraft training as a "cornerstone" of its engagement with Libya and a "natural avenue to strengthen military-to-military relations."

"Additional, USAF is negotiating to provide aircraft to the Government of Libya," Bersin wrote. "These negotiations presently do not include provisions related to aviation maintenance and flight operations training, which USAF believes significantly hampers the US position."

Bersin's memo relies in part on a pair of letters to the department from then-Assistant Secretary of State for Near Eastern Affairs Jeffrey Feltman, who first made the case for rescinding the restrictions in a February 2010 letter — while Gadhafi was still in power — in which he praised the "newly normalized relationship" between the two countries following Gadhafi's decision to abandon his weapons of mass destruction program. Two years later, Feltman argued that maintaining the visa ban will have "serious implications for US-Libya military cooperation and the overall bilateral relationship."

Feltman, who is now the UN undersecretary-general for political affairs, wrote in the May 2012 letter that "now is the time" to take action, while "the United States enjoys unprecedented popularity in Libya due in part to its strong support for the revolution."

A Congressional Research Service report one month after the attack noted that, while the attacks "disrupted U.S. aid programs temporarily," since then "U.S. officials have proposed expanded security cooperation to Libyan officials and underscored a U.S. commitment to partnership with Libya.

"As Libyans work to shape their future," the report noted, "Congress and the Obama Administration have the first opportunity since the 1960s to fully redefine U.S.-Libyan relations."

David Tafuri, a partner with Patton Boggs, which is providing legal counsel to the Libyan government, said the country has two main priorities for its relationship with the United States.

The first is increasing support for security and defense, particularly a proposal to train 5,000 to 8,000 Libyan troops outside the country as well as democracy-building efforts and support for civil society. The second is encouraging US companies to become more active in Libya, where they can take advantage of the country's vast oil wealth and support for US products and services.

The day after the attack, then-Secretary of State Hillary Clinton vowed that "the friendship between our countries, borne out of shared struggle, will not be another casualty of this attack."

"A free and stable Libya is still in America's interest and security, and we will not turn our back on that, nor will we rest until those responsible for these attacks are found and brought to justice," Clinton said. "We are working closely with the Libyan authorities to move swiftly and surely."

More than 19 months later, the failure to bring anyone to justice is taking its toll on the relationship.

In January, Congress passed an omnibus spending bill that states that no funding "may be made available for assistance for the central Government of Libya unless the Secretary of State reports to the Committees on Appropriations that such government is cooperating with United States Government efforts to investigate and bring to justice those responsible for the attack on United States personnel and facilities in Benghazi, Libya in September 2012." The spending law carves out an exception for "funding made available for the purpose of protecting United States Government personnel or facilities."

The current year's State Department budget calls for about $6 million in aid to Libya, but none of it is direct assistance to the Libyan government that would fall under the restrictions of the spending bill, according to a House aide. The government's request includes $1.5 million each for International Military Education and Training (IMET) and International Narcotics Control and Law Enforcement (INCLE) and $2.94 million for Nonproliferation, Anti-Terrorism, Demining and Related (NADR) programs.

The spending bill follows reports that the US government has charged about a dozen people for the Benghazi attack in sealed criminal complaints filed in federal court by the US Attorney’s Office for the District of Columbia. They include militia leader Ahmed Abu Khattala, whom the United States had planned to seize by force before backing down after a separate operation to capture 1998 embassy bombing suspect Anas al-Libi led to retaliation against Libyan Prime Minister Ali Zeidan.

"We know who some of the perpetrators of the 9/11 [2012] event were," said House Intelligence Committee Chairman Mike Rogers, R-Mich. "I think it's wrong for us to abdicate completely the fact that they're running around. It's our national security problem — I wouldn't hand that off to the Libyans and then ask them, 'Gee, why aren't you performing?' We need to take care of this problem and it needs to be a higher priority for the administration."

Still, Rogers told Al-Monitor, the Libyans will "need to pay a price" for their perceived lack of cooperation, "whether it's in financial aid or other."