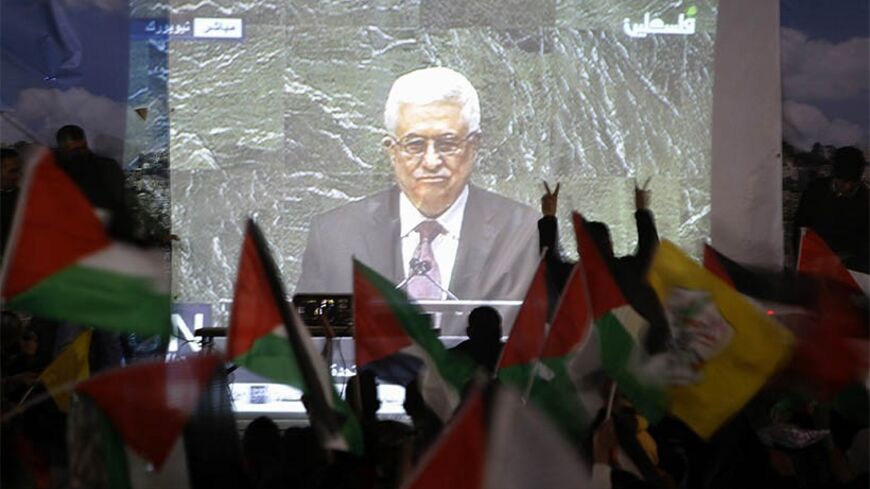 Palestinians take part in a rally while the speech of Palestinian President Mahmoud Abbas is being projected in Ramallah, Nov. 29, 2012. - REUTERS/Mohamad Torokman

Palestinians skeptical of the Oslo process have for years been complaining that it has served only to relieve Israel of its obligations as an occupying force, instead of producing an independent and sovereign Palestinian state. This has led to repeated calls for the dissolution of the Oslo-created Palestinian Authority (PA).

Empowering a population and allowing it to practice a certain level of self-determination was seen as an initial accomplishment that would serve as a bridge toward total independence. The recognition of the Palestine Liberation Organization, which prior to Oslo had been outlawed as a terrorist organization, and the return of Palestinian leaders and families were seen by many as a partial implementation of the right of return.

For Israel, the Oslo process provided major relief for its occupation forces, freeing them from having to guard populated Palestinian cities. The division of Palestinian-controlled territory into Areas A, B and C was tolerated within a temporary, five-year transition plan. Extending it to more than 20 years was never part of the original deal signed on the White House lawn in 1993.

Some argue that the process was on track until a Jewish radical assassinated Israeli Prime Minister Yitzhak Rabin in 1995. Others blame the Palestinians, for not being able to stop Hamas suicide bombings and Yasser Arafat for having indirectly encouraged or refused to discourage the eruption of the second intifada in the winter of 2000, after the failure to reach an agreement at Camp David II.

The Palestinians were lured by the trappings of a state: an Olympic team carrying the Palestinian flag, a president and parliament, postage stamps, vehicle license plates, a national anthem, government ministries, a presidential guard and, of course for some, the all-important VIP cards for travel into and out of Palestine without waiting in line like the rest of the Palestinian public. The Palestinians paid a price, however, for most of these trappings.

Having separate license plates meant total denial of nonetheless having to wait in long lines at Israeli checkpoints when driving into Jerusalem or any part of Israel, while Jewish settlers, using exclusive roads and whizzing through separate checkpoints, were rarely stopped. Having a president, parliament and government while still not being a fully sovereign state meant that the PA had to raise money to run the government and pay its public servants. A major part of the budget went toward the huge security apparatus, whose purpose is to protect Israel as part of an unwritten condition for the president to remain in power and for him and his associates to enjoy VIP travel.

Having a parliament without dissolving the Israeli civil administration meant that Palestinians lived under two sets of laws — a Palestinian legal system while still being subjected to the laws of the Israeli occupiers. Eventually even the highly coveted VIP cards for top officials, which were actually written into the Oslo Accord (appendix 5, section F) became a political liability, as senior politicians failing to toe the Israeli political line quickly found themselves without their special travel privileges.

While the idea of throwing in the towel has some strong logic behind it, there are huge forces that have become dependent on the continuation of the Palestinian government to continue running the lives of 2.5 million Palestinians. Business people, public servants, contractors and even average Palestinians are all slated to suffer in the short term if the Palestinian-run government is dissolved and replaced by Israeli military officials.

Although handing the keys of occupation management to the United Nations or to Israel might receive public support, it is frowned upon by the United States and Israel, as both realize that this would expose them much more visibly as the occupiers they are than any other act. Palestinian assertions that dissolution of the PA is actually an option for them have quickly died down. Palestinian government sources in Ramallah told Al-Monitor that the presidency was rebuked by Washington, and President Mahmoud Abbas’s associates were told to scuttle the idea before it gained traction among Palestinians.

The talk of dissolving the PA will surely strengthen the hands of the Palestinian leadership and show that they are no puppet to either Israel or the United States. The sudden silence after the initial flurry shows, however, that such a radical decision is far from easy and will require much more preparation and planning. The absence of clear alternatives for determining the fate of the Palestinian people is not something that should be thrown around as a political football of sorts.

If the Palestinian leadership is serious about such a tactic, they need to work hard on preparing the public and taking concrete steps to protect them from the harsh repercussions such a daring move would have.