A small bomb at Gaza's Catholic church is the latest attack targeting the Palestinian Christian minority in the Hamas-ruled enclave. 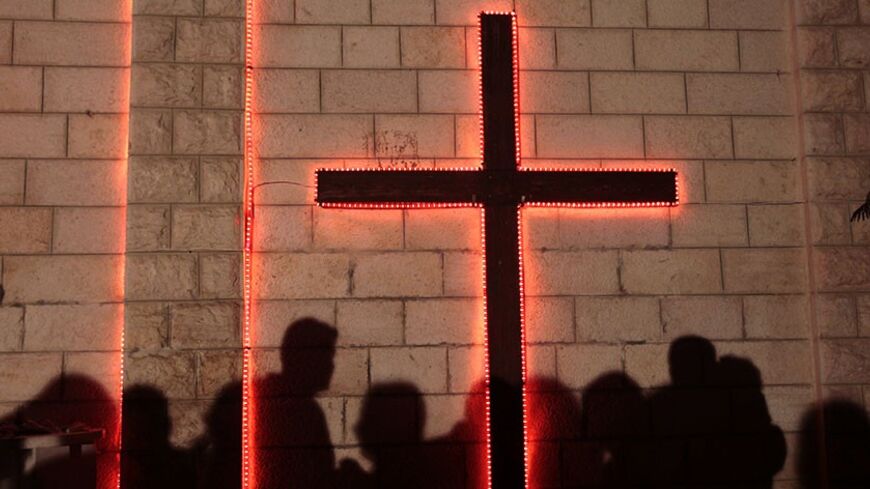 Shadows of Palestinians are cast on a wall with a cross at the Church of the Latin Convent in Gaza, Dec. 24, 2009. - REUTERS/Yannis Behrakis

GAZA CITY, Gaza Strip — The attack on the Church of the Latin Convent in Gaza City at dawn Feb. 26 was bolder than previous attacks that have targeted Christian sites in the Gaza Strip. Unknown assailants placed a bomb inside the walls of the compound, which includes a church, school, nursery, a rectory and a nunnery.

Al-Monitor visited the church and saw the location of the bomb, which left a small hole in the ground near the church's main gate. A source from the church told Al-Monitor that they heard a strange noise coming from the direction of the abandoned cemetery before the blast. Perhaps the attackers crossed the cemetery and then entered into the gated area, the source noted.

The source, who spoke on condition of anonymity, pointed to the phrases that had been written in black on the wall facing the church gate. On the right side they had written "In revenge for the Muslims of Central Africa," and on the left "We'll get you soon, O worshippers of the cross."

"The sound of the blast was strong. We were very scared about how things would develop. [The assailants] lit a fire under the pastor's car, but when we came out to see what had happened, they extinguished it. Then the police came to investigate," said the source.

"The assailants entered from the west side of the church and detonated a very small explosive. It did not inflict any damage. They also wrote phrases on the walls," police spokesman Ayoub Abu Shaar said in a phone interview with Al-Monitor. He explained that the police came to the scene immediately to begin their investigation in conjunction with detectives. Abu Shaar said that they had detained a number of suspects, but after questioning them it was proven that they were not involved, so they were released.

Abu Shaar denied media reports that the Islamic State of Iraq and al-Sham (ISIS) had claimed responsibility for the attack, stressing that ISIS has no presence in the Gaza Strip. "What happened was not an organized attack, but rather the work of individuals. As soon as we find the perpetrators they will be referred to trial," he added.

Regarding the need to secure Christian buildings, Abu Shaar said, "We work with the churches, as we do with all houses of worship in the Gaza Strip. When any incident occurs, we take the necessary measures, without exaggeration, so as not to stir up confusion or anxiety."

Is Gaza ready for a new church?

Orthodox Christians — who make up the largest Christian denomination in the Gaza Strip — are still awaiting the construction of a new church. In 1998, then President Yasser Arafat gave a piece of land comprising 3½ dunums (0.86 acres) to the Orthodox Church to build a new church beside the Amin Mosque in Abu Mazen Square in central Gaza City. However, according to Jabr al-Jilda, a religious relations official in the Orthodox Church, the mosque was built but the church is still awaiting construction.

"Ever since Abu Ammar [Arafat] gave us the land, which is registered in the name of the Orthodox Church, we have been waiting for the construction of the church. However, after the mosque was built, we were told that some had voiced objections to building the church beside the mosque. Later, mosque officials erected a fence around the land. To avoid problems, we stayed silent," Jabr told Al-Monitor.

He noted that, because of the objections voiced by the neighborhood about building the church next to the mosque, three years ago they went with the head of the church to the municipality to discuss exchanging the piece of land. The church agreed to exchange the land for another location, on the condition that it would be of the same value and they would be granted a license to build a church. But there has been a lot of procrastination regarding the matter, according to Jabr.

"This procrastination occurred despite the fact that we sent a notice [to the municipality], informing them that we had selected a new site. However, we were recently referred to the Land Authority and told that we must send them a new notice and then meet with them," Jabr added. He explained that they headed to the National Reconciliation Agency as a kind of mediation, and everyone agreed that building the church beside the mosque would be difficult.

Gaza government spokesman Ihab al-Ghussein believes that Gaza is characterized by tolerance and great potential for coexistence of religions. "Why don't they build the church beside the mosque? What's the problem? If residents of the neighborhood object, does that mean that we have to obey their demands?" Ghussein told Al-Monitor.

He stressed that the Gaza government's relations with Christians are excellent, adding that they recently exempted the YMCA from paying all late fees owed for renting government land. This year, they will only pay a symbolic fee, Ghussein noted.

Al-Monitor tried to interview the head of the Land Authority, Ibrahim Radwan, multiple times, waiting four days for the authority's public relations office to set a date for the interview. However, each time the office apologized for not being able to conduct the interview.

On March 5, Al-Monitor visited the Amin Mosque and met with one of the mosque's officials. He clarified that it's not the mosque that objects to the building of the church, but rather the neighborhood committee. "We erected a fence around the site about seven years ago. Part of the land belongs to the mosque, and we use it for various activities," he said.

The land around the mosque is green and well-groomed. Al-Monitor met with a municipal employee named Bassam who was tending the garden. "They were supposed to build a church and a mosque beside one another, but the entire neighborhood objected, not only during the era of the Hamas government but also when Fatah was in charge of the Gaza Strip. There were reservations about building the church next to the mosque," he noted.

"The objection to building the church beside the mosque came primarily from the committee comprising neighborhood residents and mosque attendees. Three years ago, [the church] went to the municipality to have it serve as a mediator. The municipality followed up on the issue with them and the church agreed to exchange the land," said Rafiq Makki, the head of the Gaza Municipality. Makki told Al-Monitor that following this agreement, the Orthodox Church was supposed to consult the municipality to determine the alternative piece of land, but this did not happen.

Makki said that the municipality employee who was in the garden is not responsible for working there, since the land does not belong to the municipality. Rather, his main job is to care for the plants lining neighboring streets. Makki said that after the land exchange agreement is completed, the garden will belong to the mosque. He called on the mosque to host its activities there.

What's surprising is that most of those Al-Monitor spoke with believed it would be difficult for the church to be located beside the mosque. However, in the old city of Gaza, the Church of Saint Porphyrius and the Katib al-Wilayah Mosque have stood side by side since the time of the Islamic Caliphate. Was the Gaza Strip more tolerant at that time than now?