Recent political disputes and corruption have led Iraqi politicians to forgo their primary roles and focus on merely gaining power, money and influence. 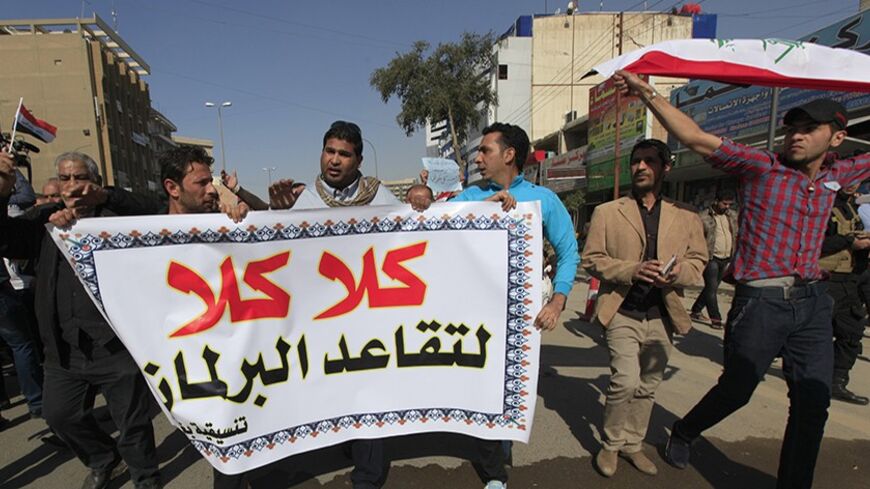 Protesters march during a demonstration demanding the abolition of a law granting pensions to parliamentarians in Baghdad, Feb. 15, 2014. - REUTERS/Ahmed Saad

Expressions like “the ethics of political work” elicit scorn and mockery in Iraq. These come not only from average citizens who have experienced a painful past and are still going through a harrowing present in their relationship with politics, leading them to see politics as anything but ethical, but also from politicians themselves. A wide spectrum of the Iraqi political class views politics as a way for leaders to rid themselves of obligations, break promises and manipulate and falsify facts for their own gain.

This article does not aim to study the historical roots of the concept of politics, nor the services the field offers or breakthroughs it achieves in organizing society, expressing its will, solving its problems and internal crises or protecting humanity from extermination in continuous wars.

Rather, what is offered here is a partial understanding of politics in Iraq in terms of conspiracy, plotting and taking advantage of conditions to oust and weaken other parties.

Justifying the hostility of Iraqi political powers — whether between the major parties or within the same party — is the long history of hardships and challenges these parties have faced. More than 10 years following the regime change in Baghdad, these past difficulties have yet to allow the parties to establish political and organizational groundwork based on principles, obligations and commitments.

It seems that the secrecy that characterized the work of most current parties in the past decades still applies. This secrecy was the product of the struggle against the regime of former President Saddam Hussein, yet it continued to be a part of the political and organizational protocol of partisan work, like an untreatable disease. This is reflected in the structures of parties and their reliance on abnormal working rules, in addition to the lack of a mechanism for power rotation within the party.

Moreover, the gloomy conditions that prevailed after 2003 and the spread of corruption have created a new pattern of partisan affiliations based more on personal and financial interests than on morals and common principles. This has paved the road for the division of parties and withdrawals from them, rendering the parties’ goals unclear and allowing for the coexistence of radically divergent figures within a single party.

The basis for establishing a political party should be clear common goals, and these goals should attract the members and popular base. However, the lack of a common goal that joins people together, even if they disagree on details, has created chaos in the political environment. The lack of a common goal has also poisoned this environment, eradicating all ethics and principles governing the relationships between the parties.

The fact that the political class does not agree on a common identity for the country and its higher interests has opened the political sphere up to regional and international polarizations which further complicated the task of creating a healthy political environment in which the public would understand political work as a public service that is characterized first and foremost by ethics.

This lack of trust has attracted a large number of political and partisan figures who joined the political sphere without qualifications or any popular base in an attempt to preserve economic, tribal or religious interests. Iraqis found themselves immersed in sectarian and national disputes, transforming political and governmental work into an arena used to settle accounts and display extremist inclinations in order to allure the most extreme of voters.

This will is to be found only amid a political milieu that believes in the ethics of political work, the noble roles it plays within society and the preservation of the complementary spirit of partisan relationships.

Elections represent a chance to bring about this change, but offer short windows of opportunity.

Change emanates from needs, and these days, Iraq is in desperate need of a political class capable of understanding its role and responsibilities toward society. Performing this role professionally and efficiently will clear the name of politics and restore trust in politicians.

In Iraq, there is a widespread illusion that political work has no ethics and that there are neither boundaries for conspiracy nor a limit on instigation and the taking advantage of blood and destruction. This is not true. Political work has ethics, an umbrella under which all political practices stand.