Ankara and Tehran are attempting to normalize a relationship put off track by Syria. 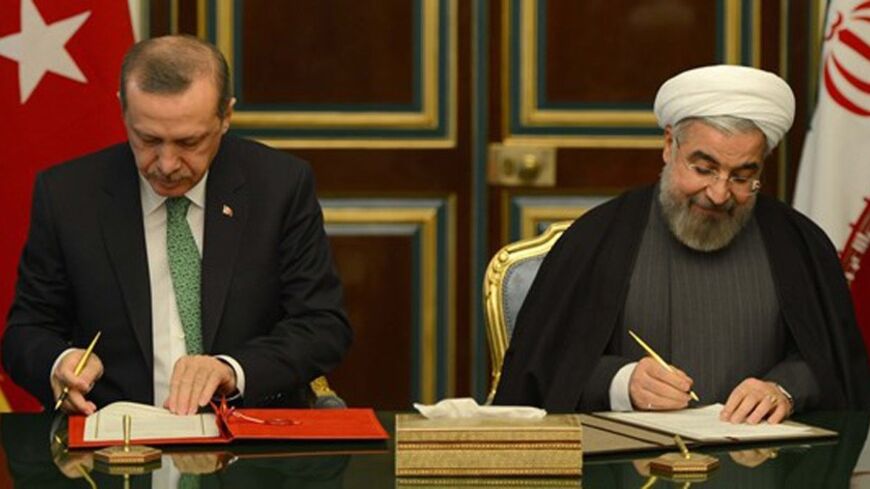 “The international political intervention should target not [Syria's ruling] Baath [Party] but the actors whose proxy war Baath is fighting,” Taha Ozhan of Turkey’s SETA think-tank wrote on Jan. 25, pointing to Russia and Iran. As the chairman of SETA (Foundation for Political, Economic and Social Research) — the main civic mouthpiece of Turkey’s deadlocked Syria policy — penned those lines, Prime Minister Recep Tayyip Erdogan was preparing to go to Tehran.

It was a slapdash article reflecting a grudge toward Russia and Iran for fending off regime change in Syria. Four days later, Erdogan was on a completely different track when he told his hosts that he felt like he was at his "second home" in Tehran.

The Turkey-Iran relationship has always been two-sided, but the Syrian crisis upset the balance, threatening the positive side. Erdogan was in Tehran to bolster that side. Back to a “win-win” mode, he set a target of $30 billion in bilateral trade for 2015. In 2013, the trade volume dropped to $13.5 billion from $21.8 billion the previous year. The two sides signed a preferential trade agreement after a decade of negotiations. Under the deal, Turkey will reduce tariffs on certain agricultural imports from Iran, while Iran will do the same for certain industrial goods from Turkey. The two countries agreed also on a road map of enhanced cooperation in commerce, investment, transportation, customs, standardization and transport. Most important, they agreed to establish a High-Level Cooperation Council. The signing of the related accord and the first joint cabinet meeting of the two governments will take place during Iranian President Hassan Rouhani’s visit to Ankara, expected to take place later this month. However, joint cabinet meetings that Turkey had launched earlier with Iraq and Syria have been forgotten amid turmoil in its regional ties.

The main focus of interest during Erdogan’s Tehran visit was the prospect of rapprochement on Syria. Before the cameras, Erdogan and Rouhani largely avoided the Syrian issue, leading to suggestions that the disagreement persisted. Asked whether any ground for cooperation had been found, an official from Erdogan’s entourage told Al-Monitor, “The discussions on the Syrian crisis can be termed as an exchange of views rather than rapprochement.” Some Iranians, like parliament member Emir Huceste, may think that Erdogan has recognized he erred on Syria, but to say that Turkey has come around to the Iranian stance would be a hasty conclusion. Nonetheless, Turkey has certainly shifted to a new track, where it may have to cross paths with Iran at some point.

There are two new realities that could be seen as signs of rapprochement: Turkey has conceded, first, that the Syrian regime has cheated death and the civil war cannot unseat President Bashar al-Assad, and, second, that al-Qaeda has created a problem of terrorism in Syria.

In Tehran, Erdogan stated, “The terrorist groups that are operating under the cover of Islam are in no way related to Islam. We will widen our cooperation shoulder-to-shoulder with Iran in combating terrorist groups.” Rouhani, for his part, spoke of “common views about … terrorism and extremism.”

What the two sides disagree on is the source of terrorism. According to Turkish officials, the Iranians maintain that “Assad’s departure would make no sense without the elimination of terrorist groups, the prevention of their entry [to Syria] and cutting the financial and other support they receive.” In response, Erdogan said: “The terrorist groups emerged under Assad. A government change is a pressing necessity. We disagree with the argument that ‘this cannot happen as long as terrorist groups are there.’ Measures could be equally taken through the formation of an interim government in Syria. The interim government could combat terrorism by means of the Free Syrian Army and at the same time lead the country to elections.”

Asked about any compromise with Iran on Syria, Erdogan said, “I cannot say we have reached an agreement.” He added, though, that the two sides had instructed their foreign ministers and intelligence chiefs to work on the issue. This proposal reportedly came from Iran and the Turkish side accepted. So, here begins the path to compromise. The common discourse of threat regarding the situation in Syria lays the ground for cooperation.

Four factors are compelling Turkey to seek partnership with Iran:

All those compelling factors for Turkey on one side and Iran’s efforts to break its international isolation on the other are leading both countries to look at the glass as being more full than empty.

In this context, the Fars News Agency’s comment was remarkable: “Iran and Turkey are both trying to return to the golden age of their relations after a period of recession in ties due to their differences on certain regional issues, especially over Syria.”

Yet, factors that have had a deviant impact on Turkish foreign policy in recent years such as “big ego,” “confidence explosion,” “interventionism,” “sectarian impulses” and “vengeance” remain resilient. Hence, one should keep in mind that the cooperation track with Iran is a thorny one, too.