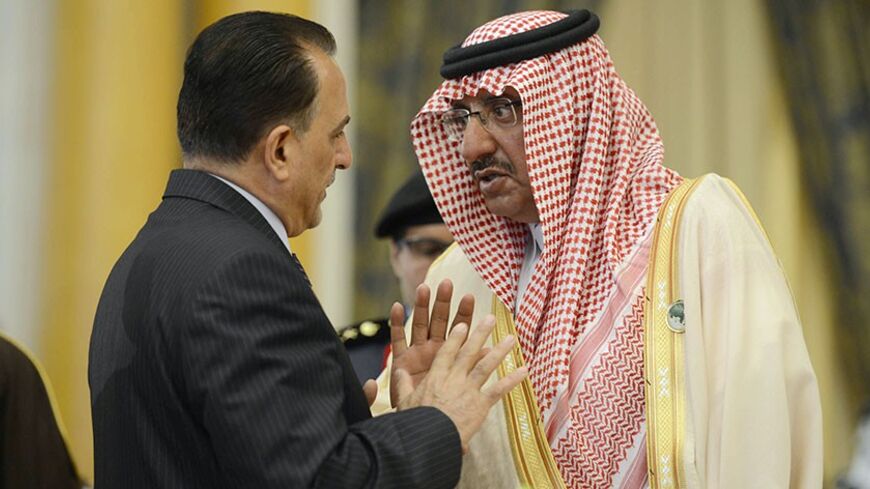 It's perhaps unusual for an interior minister to be in charge of foreign policy, travel to world capitals and negotiate transfers of arms to rebels in regional conflicts. But conventions often do not apply in the Arab world and certainly not in Saudi Arabia, where princes perform multiple and diverse tasks. Reports are circulating in the media that Minister of Interior Prince Muhammad bin Nayef, known for his counterterror efforts, will replace his nephew Prince Bandar bin Sultan as the man in charge of the Syrian file. Saudi sources remain unsurprisingly silent on the speculations. The prince’s task allegedly revolves around defeating President Bashar al-Assad by arming moderate Syrian rebels and fighting al-Qaeda and its affiliates in Syria. Such a specific agenda is reportedly meant to reinvigorate Saudi efforts to remain relevant in Syria, where bin Sultan's strategies have failed miserably over the last three years. Can bin Nayef achieve this rather difficult objective that would allow him to go beyond his narrow expertise as the security man who defeated al-Qaeda in the Arabian Peninsula, and eventually emerge as the future monarch of Saudi Arabia?

One outcome of the war on terror was the making of "big men" who were granted extensive powers and unlimited budgets to fight the menace of terrorism, uproot its fiercest practitioners, de-radicalize its sympathizers and emerge triumphant over not only terrorists but societies that are ruled with an iron fist. Bin Nayef’s career over the last decade seems to correspond to that of the counterterror "big man." Like the terror they fight, such "big men" seek to be global. To succeed, they need to reach out to an international constituency and a web of world leaders and intelligence services. Bin Nayef visited Washington several times over the last year or so — the last such visit was on Feb. 11 — seeking dialogue with US President Barack Obama and senior officials in the State Department and the CIA. A counterterror "big man" needs to convince Washington that he knows the terrorists and their hideouts and can turn their religiously saturated discourse on its head and catch them before they unleash their terror on peaceful civilians.

Bin Nayef must have convinced Washington that he knows the terrorists very well, so well in fact that they came too close for comfort. On one occasion, a terrorist was invited to meet him to discuss repentance and reunion with his wife. But treachery won out, and the terrorist turned up with hidden explosives that exploded and mildly injured the prince. The prince inaugurated a showpiece de-radicalization program, almost a five-star rehabilitation resort, where a number of religious scholars, psychologists and sociologists work as counselors re-educating terrorists in the art of tolerance and moderate religious interpretations. After graduating from the program, they are rewarded with a comfortable life, a stipend, a wife and a job. The project attracted international attention as a success story despite the fact that some graduates may relapse and return to their original convictions. Nevertheless, as the program's founder, bin Nayef emerged as the tamer of terrorists whose expertise is now sought by international counterterrorism agencies from Washington to Singapore.

One difficulty that hindered the program's success was the fact that Saudi Arabia was fighting a battle with its own ideology. The terrorists were simply putting into practice what their government and its agencies had taught them for years. Bin Nayef was not fighting a battle with an external ideological trend, but a very local one, so local in fact that it helped forge the Saudi state itself, which was conceived as a project to "purify" Islam and eradicate differences. The prince wanted to eradicate the ideology of terror in a state that was founded on eradicating other ways of thinking and behaving, so this dilemma will continue to haunt any serious effort to contain terrorism. To put it bluntly, the prince did not succeed in eliminating terror; he simply pushed it away to countries like Yemen, Iraq and now Syria and Lebanon.

Like many counterterror "big men," bin Nayef used the pretext of fighting terrorism to further undermine the limited human, civil and political rights that Saudis aspire to enjoy. Like his father, the late Prince Nayef, he presides over a network of security, intelligence and policing agencies that curtail people’s freedom. During the last decade, it has become easy for a Saudi to end up in prison after posting an article on Facebook, appearing on international media outlets or dreaming of establishing a civil society organization. In fact, posting 140 characters on Twitter may lead to a prolonged visit to prison and a delayed trial presided over by one of his "little men," mainly judges who claim to apply Sharia but in fact they apply the prince’s law. It was no surprise that bin Nayef’s portrait was burned by women demonstrators in Buraidah last year when they called for fair trials and the release of their relatives, held in prison for several years. Torture in bin Nayef’s prisons has become notorious, reported by both international human right organizations and local ones that remain unlicensed in a country that still bans an independent civil society.

The war on terror allowed bin Nayef’s ministry, by now a state within the state, to become too big for comfort. On several occasions, Saudi reformers composed petitions in which they called for limiting the Ministry of Interior’s powers over the judiciary and the provinces. They pointed out that the rule of law and the protection of civil and human rights were lacking in Saudi Arabia and called upon the government to respect the law when dealing with citizens. While retaining their commitment to a national agenda, reformers envisaged a federal system that would free the provinces from the Ministry of Interior’s centralized control and push toward local development and the elimination of poverty and corruption. The unlicensed Saudi Civil and Political Rights Association went as far as asking for putting bin Nayef on trial. His son Muhammad made sure that all authors of petitions were not only put in prison, but also banned from travel for several decades after their release.

On his coming visit to Riyadh in March, certainly Obama will not be concerned with such unpleasant local Saudi details. Like his US predecessors and European counterparts, Obama will congratulate the Saudi leadership for all its efforts to combat terrorism and set a new target for bin Nayef and other Saudi princes, mainly to show how effective they are in Syria, where a raging rebellion is unsurprisingly refusing to calm down, given the multiple sources of funding that are fueling it. It may not be so straightforward for bin Nayef to control Syrian rebels on the Saudi payroll, separate the radicals from the moderates or agree on the meaning of rebellion and terrorism in the Syrian context. Bin Nayef will fight hard on the Syrian front, simply because there is too much at stake — namely, his credentials as he tries to overcome his narrow counterterrorism legitimacy and replace it with that of a statesman. The shift toward positioning himself as the rightful monarch from among the second royal generation after King Abdullah’s death will require something beyond the Saudi local context. Bin Nayef needs to establish his reputation regionally as an arbiter of complex webs of interest groups, countries and rival powers. Success in counterterrorism efforts may be an important but not sufficient precondition for the transformation of a "big man" into the monarch of one of the most important countries in the region and the world. But he can rest assured that his policing excesses at the home front will never worry Obama when he turns up in Riyadh next month.