Jordanian officials worry that allowing the transport of weapons to Syrian rebels across Jordanian territory could make it a target of retaliation, while opening up its borders to foreign fighters. 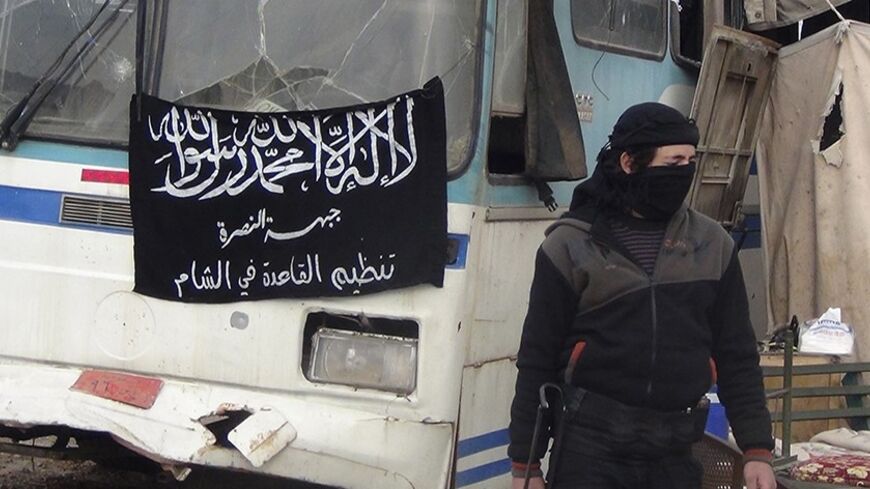 A member of the Islamist rebel group Jabhat al-Nusra mans a checkpoint at a border crossing between Syria and Jordan in Daraa, Dec. 26, 2013. - REUTERS/Ammar Khassawneh

AMMAN, Jordan — Jordan’s news media regarded King Abdullah’s meeting with US President Barack Obama on Feb. 14 at the Sunnylands estate in southern California a success. Abdullah announced that the United States would renew a five-year aid package — worth $660 million annually — in addition to guaranteeing $1 billion in loans aimed at supporting Jordan’s frail economy. The two leaders discussed the Syrian crisis and the prospects of US efforts to conclude peace between Israel and the Palestinians, two issues that affect Jordan directly.

The meeting coincided with news from Geneva that the second round of peace talks between the Syrian government and the opposition, under UN auspices, had failed. Speaking to reporters in the presence of Abdullah, Obama announced that he would be seeking “a more aggressive” and “immediate” stance on Syria, especially in delivering humanitarian aid. US Secretary of State John Kerry declared earlier that the president wanted to review fresh options on Syria and senior administration officials told reporters covering the king’s visit that all options remain on the table short of putting American boots on the ground.

These options remain undecided but observers here believe that the United States is considering supplying lethal arms to the Syrian rebels and that Jordan will soon find itself involved in this operation. On Saturday, The Wall Street Journal, quoting an unidentified Arab official and opposition sources, reported that Saudi Arabia would deliver Chinese man-portable air defense systems, or MANPADs, and anti-tank guided missiles from Russia to the rebels. It said that such weapons were already in warehouses in Jordan and Turkey.

And popular columnist Abdel Bari Atwan wrote this week that former ambassador to Syria Robert Ford had asked the Syrian National Council to “heat up” the southern front in Daraa to increase pressure on the Assad regime. Atwan wrote that opening up the southern front, most of which is under the control of the Free Syrian Army, would certainly drag Jordan into the Syria crisis.

Since the collapse of the Geneva talks last week, the Syrian regime has widened the scope of its military operations, launching a sustained attack in the Qalamoun Mountains, north of Damascus, to occupy the strategic town of Yabrud. Kerry accused the Russians of enabling the Syrian government’s “pursuit of a military path.” The Russians retorted by blaming the opposition for the failure in Geneva. It is clear that the coming weeks will witness an increase in military confrontations.

Jordan had always denied reports that it had facilitated the passage of fighters and arms through its borders with Syria. The Syrian regime had warned Jordan not to get involved or bow to US and Saudi pressures. But since the summit in California, Jordanian officials have refused to comment on news that arms would be sent across the borders to Syrian rebels.

In fact, on Feb. 17 the government announced that the armed forces had prevented fighters from crossing from Syria to Jordan, wounding at least three. Jordan’s Salafists claimed that the army is not allowing Jordanian citizens, fighting in Syria, to return to Jordan.

It is not clear how Jordan will react to a Saudi or US request to deliver arms to Syrian rebels in Daraa. If the southern front did heat up, it would be a serious development for Jordan. The kingdom already hosts over 600,000 Syrian refugees, mostly from southern Syria. If fresh fighting flared up in that region, it would create new waves of refugees. But more important, it would bring the fighting closer to Jordan’s borders.

Jordan has tried to distance itself from calls for regime change in Syria. In California, Abdullah underlined the need for a political solution in Syria without going into details. Jordan has kept the Syrian Embassy open in Amman while officials have deliberately avoided meeting the head of the Syrian National Council, Ahmad al-Jarba, publicly. Unconfirmed reports spoke of occasional intelligence cooperation between Amman and Damascus over the passage of arms and fighters.

Officials here would neither confirm nor deny Jordan’s participation last week in a secret meeting of top intelligence chiefs from regional and Western countries. The meeting in Washington, reported by The New York Times, included intelligence officials from Saudi Arabia, Qatar, Turkey, Britain, France and the United Arab Emirates, and several others from the 11-nation group known as the Friends of Syria. The purpose of the meeting, the newspaper said, was to discuss “how to best provide that new lethal aid to rebel groups.”

Jordan’s role in facilitating arms delivery through its borders is an open issue. Officials here insist that Jordan will have no such role, but if the southern front does explode then things could change on the ground. Abdullah has described Jordan as an oasis of stability in the region. So far it has avoided getting sucked into the Syrian crisis and averted any spillover. Obama’s fresh options on Syria, which include sending arms to the rebels, could end all that.