Iran not dealing on missiles

On the eve of negotiations on a comprehensive nuclear package, Iran’s missile program becomes part of the pre-talks political maneuvering. 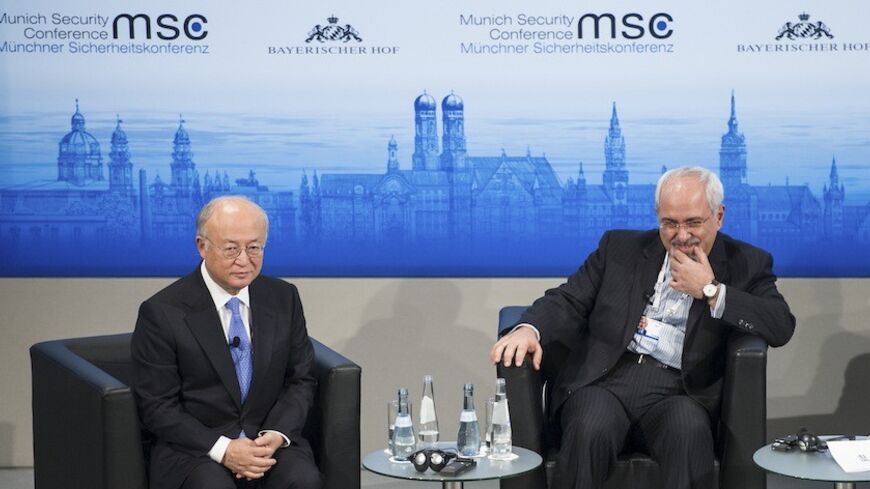 TEHRAN, Iran — As we approach negotiations on a final nuclear deal between Iran and the P5+1 (United States, Britain, France, Russia and China plus Germany), various stakeholders predictably are maneuvering themselves.

On Feb. 4, US lead negotiator Wendy Sherman testified before a Senate hearing that Iran’s ballistic missile program will be addressed as part of a comprehensive accord. Days later, an International Atomic Energy Agency (IAEA) delegation arrived in Tehran for talks on expanded cooperation. The visit ended with a breakthrough — Iran agreed to address some PMD (Possible Military Dimension) concerns for the first time in years. This followed IAEA Director General Yukiya Amano’s participation in a panel with Iranian Foreign Minister Mohammad Javad Zarif in Munich. At that session, Amano was explicit in calling for more Iranian cooperation on outstanding issues. However, the only outstanding matter he brought up specifically was Iran’s past experiments with polonium-210 — a matter considered resolved by his predecessor.

It's worth bearing in mind that the IAEA seeks access to military sites, including Parchin, and data related to the Iranian ballistic missile program. Iran faces the allegation that it has carried out computer modelling possibly intended to develop an atomic warhead for its ballistic missiles. While cooperation on this matter was not agreed on in Tehran on Feb. 9, it is likely to be brought up sooner or later.

Also on Feb. 9, reports surfaced of Iranian lawmakers alleging that the Supreme Iranian National Security Council, headed by President Hassan Rouhani, had stopped a scheduled annual missile drill. On Feb. 10, Defense Minister Hossein Dehghan announced the test-firing of a new generation of long-range ballistic missiles. The exact details of the missile tests, including whether those announced on Monday are related to the drills of whose cancellation lawmakers alleged on Sunday, remain unclear.

What's clear is that Iran’s ballistic missile program is being pushed to the fore by various stakeholders in the nuclear negotiations. It is worth bearing in mind that some Iranian opponents of the Joint Plan of Action agreed upon in Geneva in November charged that Tehran had conceded too much too soon, and that the P5+1 would soon ask for Iran’s ballistic missiles. Some observers are now suggesting that the missile test debacle is the result of infighting between Rouhani and hard-line adversaries.

However, before making assumptions that the current Iranian administration is willing to put Iran’s missile inventory on the negotiating table, it is useful to consider the big picture.

To many, the memory of Iraq under Saddam Hussein has faded. However, among most Iranians, and Iranian diplomats in particular, this is not the case. Many Iranian officials recall the passing of UN Security Council Resolution 687, in particular — the cease-fire accord following Saddam Hussein’s invasion of Kuwait.

Apart from targeting Iraq’s WMD (weapons of mass destruction) programs, the text decided that “Iraq shall unconditionally accept the destruction, removal or rendering harmless, under international supervision, of all ballistic missiles with a range greater than 150 kilometers [93  miles] and related major parts, and repair and production facilities.” Seven years later, US President Bill Clinton signed the Iraq Liberation Act into law. The rest, as they say, is history.

Many know that Iran was the main victim of Saddam’s use of chemical weapons. What many do not know is that Iran was also the main victim of Saddam’s ballistic missiles. In the late 1990s, the UN special commission, the United Nations Special Commission (UNSCOM), determined that Iraq fired 516 imported missiles at Iran during the two countries’ 1980-89 war. In comparison, Iraq fired a mere 93 such missiles during the 1991 Gulf War.

Not surprisingly, it was the Iraqi invasion that compelled the Islamic Republic of Iran to seek ballistic missiles. Iran, short of spare parts and advanced munitions for its US-delivered air force, turned to countries such as Libya and Syria to acquire Soviet-made Scuds. Today, Tehran controls the biggest and most diverse missile inventory in the region.

The Islamic Republic’s main motivation to expand its arsenal of projectiles has never been offensive. As former UN weapons inspector Mike Elleman puts it, “Iran’s ballistic missiles are too inaccurate to be militarily effective when armed with conventional warheads. The regime likely believes that the missiles can deter … its regional adversaries, regardless of warhead type.”

Iran’s deterrence strategy is not determined by its president. Even if it was, it is unlikely that Rouhani, who commanded the National Air Defense for six years — including the period of “the War of the Cities,” when Saddam rained ballistic missiles on major Iranian cities — would consider surrendering hard-earned military capabilities.

Indeed, the Iranian nuclear negotiating team has been swift in its dismissal of suggestions that Iran’s ballistic missiles will be on the negotiating table. On Feb. 9, negotiator Abbas Araghchi said Tehran’s “defensive issues are neither negotiable nor subject to compromise. They are definitely among our red lines in any talks.” And on Feb. 11, Iranian Deputy Foreign Minister and nuclear negotiator Majid Ravanchi told Al-Monitor, “Iran will not discuss any extraneous issues in the talks.” He emphasized that “the subject at hand is the nuclear issue” and that the Iranian side will “not accept the addition of any other issue to the agenda of the talks.”

In sum, as we approach negotiations on a final nuclear deal between Iran and the P5+1 and particularly for the duration of these talks, it is wise to avoid mistaking political maneuvering for actual policy. And if political maneuvering does evolve into actual policy in these coming months, such a loss of focus after having spent 10 years on getting where Iran and the P5+1 are today would be a momentous misstep.