Former arch rivals Hamas and Mohammed Dahlan have found common ground in that they both oppose President Mahmoud Abbas. 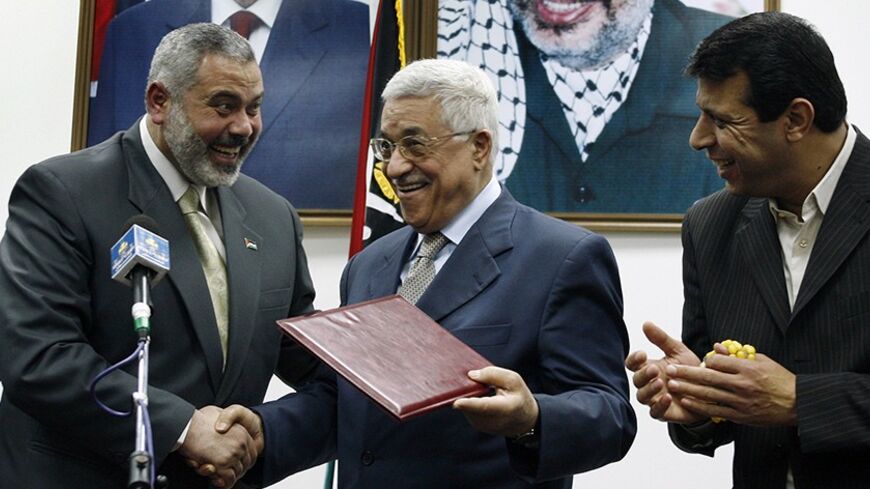 GAZA CITY, Gaza Strip — Fatah's members of parliament (MPs) Majid Abu Shamala and Alaa Yaghi arrived in the Gaza Strip Jan. 21 for their first visit since 2007, the year Hamas assumed power there. Their arrival, the fruit of talks between the leaders of the opposing Palestinian movements, was also made possbile after Gaza Prime Minister Ismail Haniyeh declared that leaders and cadres of Fatah who had left the Gaza Strip were now welcome to return. Haniyeh also announced the release of a number of Fatah detainees from Hamas prisons as part of a unilateral initiative to “enhance the reconciliation steps with Fatah.”

The two MPs are among Fatah leaders who had supported Mohammed Dahlan, the party’s strongman in the Gaza Strip who fell out with Palestinian Authority President Mahmoud Abbas. Their appearance in Gaza raised rumors of a rapprochement between Dahlan and Hamas behind closed doors. Suspicions were also stoked by the Islamist movement allowing Dahlan followers to work in several areas in Gaza during the past few months without direct surveillance, according to a source in Hamas.

This same source, who spoke to Al-Monitor on condition of anonymity, revealed, “Intensive contacts were made during the past few months between leaders close to Dahlan and the Hamas movement through Rouhi Mushtaha, a member of the [Hamas] political bureau. This led to a certain rapprochement between both sides and loosened the security restrictions on the members of Fatah in the Gaza Strip.”

The Haniyeh government's permission for Dahlan allies to work in Gaza does not seem to be a leap in the dark for either side. There appears to have been an undeclared understanding reached by Hamas and Dahlan, as reflected in the noticeable halt in harsh exchanges between the two camps via their respective media outlets.

The launch of a joint “social solidarity committee,” chaired by Abu Shamala and with Ismail al-Ashqar and Mushtaha, two Hamas leaders, as members is one joint undertaking that has become public. The committee will oversee the construction of a residential city in central Gaza funded by the United Arab Emirates (UAE) to house freed prisoners. In the past, some of its other activities have included supervising the planning of collective weddings, covering university students’ fees and providing in-kind assistance to the poor in the Gaza Strip. The Gaza government has also allowed a charity run by Dahlan’s wife to resume activities in support of humanitarian projects, in particular in the refugee camps.

For his part, political writer Ibrahim Abrash said that the reason behind the rapprochement between Dahlan and Hamas is clear — to improve Hamas’ relations with the interim military regime in Egypt and the UAE, both of which Dahlan has developed strong ties with. Writing Jan. 27 on the Arabic Media Internet Network, Abrash asserted, “It seems that Hamas has felt that Dahlan can be its saving grace from its strategic, political and financial dilemma, thanks to his special relations with the UAE and Egypt and his stable relations with Washington.”

Abu Shamala appeared to confirm this interpretation when he told Al-Monitor, “We are trying to coordinate with our Egyptian brothers to stop any measures that affect our people in Gaza and ease their pain. We are confident that our Egyptian brothers are ready to ease the suffering of Gaza’s people.” In response to a question posed by Al-Monitor about whether his return points to a rapprochement between Dahlan’s movement and Hamas, he said, “We cannot stand helpless before the crises that the Gaza Strip is facing. We should try to heal wounds and help in the construction process regardless of any political consideration or analysis.”

The source in Hamas said that about 80% of the Palestinians returning to Gaza among the 120 announced by Haniyeh in an interview with al-Kitab satellite channel belong to the Dahlan faction in Fatah. The source added that this was only natural given that the Dahlan faction was among the most affected by the division, as it was leading the war against Hamas.

In an article published by the pro-Hamas Felesteen newspaper, Yousef Rizqa, a political adviser to Haniyeh, categorically denied that there was any relationship between the Fatah MPs coming to Gaza on the one hand and the rapprochement with Dahlan and his movement on the other. Rizqa added that permission to enter was nothing more than a gesture of goodwill on the part of Hamas to facilitate Palestinian reconciliation.

The Hamas source noted, “There may be some benefit for the government in Gaza to let Dahlan and his cadres return to operate in Gaza, but this was not the primary objective of such a move.” The source denied that Hamas is using disputes between Dahlan and Abbas to make political headway.

Nevertheless, it cannot be denied that both parties are taking advantage of their respective situations. Hamas is trying to politically withstand the pressure being exerted on it by Egypt, and Dahlan’s solid ties with Cairo and its key supporter, the UAE, may help in that regard. Meanwhile, Dahlan is seeking to re-enter Palestinian politics but faces serious obstacles as long as Abbas and the core of Fatah in the West Bank oppose him. Reconnecting with his popular base in Gaza might strengthen his hand within Fatah.

Abu Shamala and the Hamas source agreed that Dahlan will not visit Gaza anytime soon because of concerns about possible repercussions to Hamas’ ties with Abbas. “Such a move could burn bridges [between Hamas] and Abbas,” the source said.