Iraq’s Minister of State for Provincial Affairs Torhan al-Mufti caused an uproar when he made statements that the government had decided to transform two Turkmen-majority districts into provinces, yet the actual governmental decisions left the matter open. 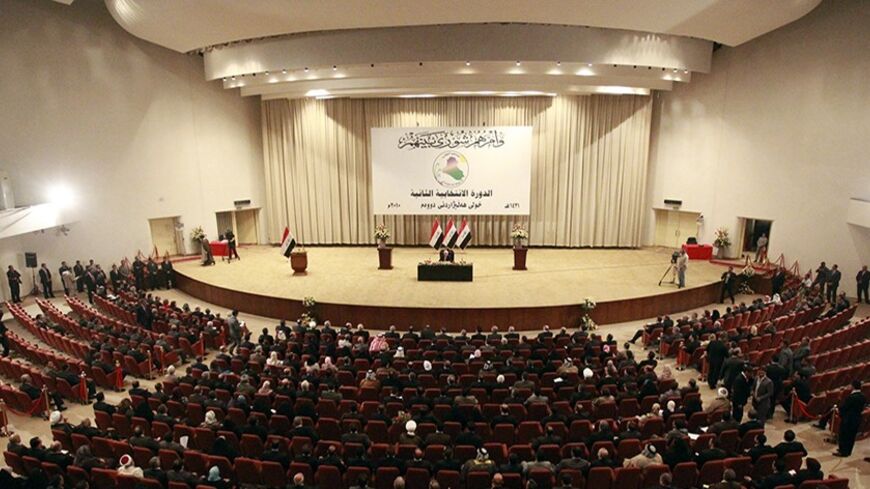 The Iraqi parliament in session in Baghdad, Nov. 11, 2010. - REUTERS/Thaier al-Sudani

Iraqi Minister of State for Provincial Affairs Torhan al-Mufti caused confusion among the media and the public when he announced on Jan. 21 that the Iraqi government had agreed to transform two districts — Talafar in the Ninevah province and Tuz Khurmato in the Salahuddin province — into provinces. Both of these districts have a Turkmen majority.

Yet, Mufti, who belongs to the Turkmen minority himself, only mentioned the parts that related specifically to Turkmen when speaking about these decisions. In fact, the decisions — issued in a statement on the same day — referred to two points:

First: "[The Iraqi government] has agreed, in principle, to turn the districts of Tuz Khurmato, Fallujah and the Ninevah Plains into provinces, and the cabinet will decide on this after the fulfillment of the necessary requirements. A committee will be formed that is headed by the concerned minister of state [Mufti], and includes representatives from the Ministry of Justice, the Ministry of Municipalities and the General Secretariat of the Council of Ministers. This committee will develop the controls and standards to support transforming the districts into provinces."

Second: "[The Iraqi government] has agreed on a draft law to create the province of Talafar in the Iraqi Republic, and it will be referred to the parliament based on the provisions of Article 61 (Item I) and Article 80 (Item II) of the constitution."

The constitution does not stipulate the mechanisms for transforming an administrative unit into a province, but a part of Article 120 does describe the provinces and their administration. The article notes:

"First: The provinces shall be made up of a number of districts, subdistricts and villages.

"Second: Provinces that are not incorporated in a region shall be granted broad administrative and financial authorities to enable it to manage its affairs in accordance with the principle of decentralized administration. This will be organized by law.

"Third: The governor, who is elected by the Provincial Council, is the highest executive official in the province to practice his powers authorized by the council.

"Fourth: A law shall regulate the election of the Provincial Council, the governor and their powers."

Furthermore, the 1969 Provinces Law (No. 159), which was canceled after the ratification of the 2008 Provinces Law, gave the executive branch the absolute right to create new provinces. Article 4 of this law noted: "When a new province is created, the provincial center should be specified, its name should be changed, its borders established and it is no longer affiliated with districts and subdistricts of [the old province it belonged to]. It will be [a new province or join another province] as per a presidential decree issued upon the proposal of the [concerned] minister, with the approval of the cabinet and ratification by the Revolution Command Council."

Such precision regarding terminology was necessary to prevent the confusion in understanding this issue, which has continued to this day. The reactions that accompanied the government's most recent announcement were characterized by misunderstanding. For its part, the official Al-Iraqiyya news channel reported on Mufti’s statements without providing the wider context. Other media outlets then spread this report.

The truth is that the only district that [the government] has approved turning into a province is Talafar. The proposals to transform the Ninevah Plains, Fallujah and Tuz Khurmatu into provinces are being studied. These proposals are awaiting the relevant committee's completion of the preparation of conditions and mechanisms for turning these districts into provinces, which are not specified in the Provincial Powers Law of 2008. These conditions and mechanisms are also not listed in the amendments made to the same law on June 23, 2013.

It is necessary that there be legal controls, mechanisms and clear conditions for converting districts into provinces. This prevents the issue from being politicized and from being used in the framework of demographic changes, or to provoke new conflicts.

Unlike the Iraqi government's decision in December 2013 to convert the district of Halabja into a province — which was met with wide popular support — this recent decision has sparked a chain of negative reactions and threats.

On Jan. 21, the Ninevah Provincial Council threatened to declare the province a [federal] region as soon as the decisions to convert Talafar and the Ninevah Plains into provinces are implemented.

The same applies to the Anbar province, which objected to applying this decision to the Fallujah district.

In turn, the Kurdistan Alliance bloc, strongly protested this decision. Especially since the Ninevah Plains, Talafar and Tuz districts are located in the areas that are being disputed between Iraqi Kurdistan and the Baghdad government.

In addition, the decision prompted various other Iraqi districts to call for being turned into provinces. Calls that had been made previously to turn the district of Zubair in south Basra into its own province re-emerged and escalated. There were also calls to turn some districts of Baghdad into provinces, including Sadr City.

Transforming any administrative unit into a province involves several fundamental changes in terms of the administrative structure of these units. This includes forming local governments, obtaining an independent share of the general budget, and gaining access to legal provisions that allow [the province] to declare itself a federal region, or representation in parliament.

One could speak at length about the fact that most of the administrative units that have proposed turning into provinces do not possess the infrastructure nor the adequate administrative cadres for such a shift. There are also ethnic and sectarian sensitivities that such steps could provoke.

But the foundation of any administrative structure is its legal basis. The latter should be based on a law with clearly defined articles, which relies on the Iraqi constitution. Moreover, it should be consistent with the form and direction of the Iraqi state post-2013, not with those prior to this date. The absence of such a legal structure opens the door for a period of crises and disputes that precedes a parliamentary vote on whether to accept or reject the Council of Ministers' decisions.

From a legal perspective, the Iraqi parliament must first pass the law on "the demarcation of administrative borders of the provinces," which to this day is still under study. It is not expected that this law will be passed any time soon, because of the disputes that could result from redrawing borders and restoring them to what they were in 1968.

It was understandable that these governmental decisions about forming new provinces caused confusion. Before announcing the names of those districts may be turned into provinces, it would have been better had the government finished determining legal controls and conditions, as well as geographic, demographic, economic and service-based standards that would frame such a step.