Although liberal and civil Iraqi figures have formed a new alliance to compete in upcoming parliamentary elections, they seemed to have garnered little popular support amid an increasingly sectarian atmosphere. 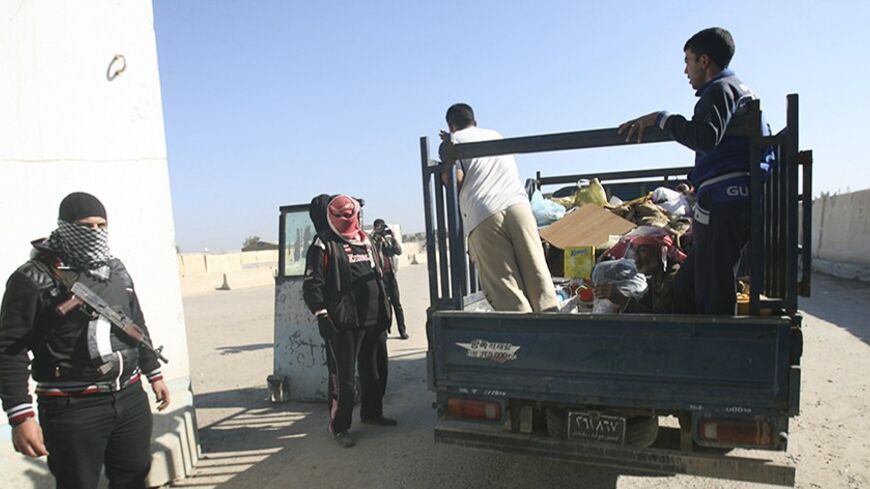 Iraqi Sunni gunmen stand guard as civilians flee their homes, at a checkpoint in the city of Fallujah, 50 kilometers (31 miles) west of Baghdad, Jan. 8, 2014. - REUTERS

A group of Iraqi youth started to disseminate posts on social networking sites to promote the Civil Democratic Alliance, which comprises Iraqi civil and liberal figures running in the parliamentary elections on April 30. The majority of the alliance’s members advocate the establishment of a civil state, after political Islam took power in Iraq following the fall of the Saddam Hussein regime in April 2003.

The Civil Democratic Alliance created a page on Facebook to gather the youth, who make up 40% of Iraqi society. The alliance began to spread its goals and political platforms for the elections.

Observers, however, doubt that the alliance will score high in the elections, amid elevated sectarian tensions and the operations conducted by the Iraqi military in Anbar.

Yasser al-Salem, a member of the Central Committee of the Communist Party, one of the prominent parties taking part in the alliance, said, “Competitiveness in the upcoming parliamentary elections will be higher than in any other elections.”

Speaking to Al-Monitor, Salem said, “The Civil Democratic Alliance will compete with sectarian and national coalitions [in the elections]. It enjoys considerable popular support, which will allow it to win more seats in parliament than its powers unilaterally won in past elections.”

“There will be strong competition. This is despite the fact that Islamist powers, which are currently running the country, have launched their electoral campaigns by taking advantage of their influence, distributing lands, buying the conscience of people and encouraging sectarianism. These campaigns aim at creating negative polarizations that will affect the results of the elections, such as the exploitation of the incidents of Anbar,” Salem added.

“During negotiations to form electoral alliances, main powers in the alliance refused the requests to include political figures who are involved in the current political crisis,” Salem noted.

“The powers of the Civil Democratic Alliance refused many concessions and financial temptations provided by influential political parties, which tried to impede the formation of this alliance to disperse its votes,” Salem stressed.

Journalist and author Muntather Nasser, however, told Al-Monitor, “Civil powers and figures are still struggling and have yet to reach a level of political maturity.” He justified this statement by saying, “For the first time, these powers are trying to overcome their weaknesses and dispersion, through the formation of an alliance. This alliance will allow them to concentrate and preserve the votes — at a time when big lists are divided into small lists — to take advantage of an electoral law dubbed Sainte-Lague 0.6, which treats small lists fairly.”

“These parties are dealing with poor popular support, which does not allow them to compete with national and sectarian coalitions and parties. Until this point, these parties do not have a rhetoric that will influence the citizens and youth,” Nasser said.