Coffee in Gaza is a ritual for grief and creativity

Despite the emergence of modern cafes and the growing popularity of espresso, some Gazans have preserved ancient Arabic coffee-drinking traditions. 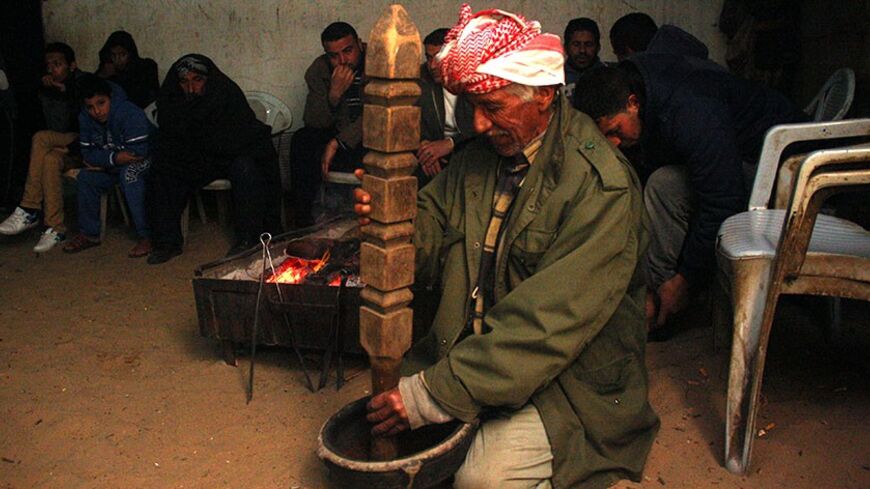 GAZA CITY, Gaza Strip — Young Jabar Abu Houli pours coffee from a copper pot for his guests and then waits for them to finish drinking. If they shake the empty cup or put two fingers above it, it means they are finished and do not want anymore. If they hand him the cup in a normal manner, he will pour them more of the black coffee. This ritual takes place every morning and evening in the sitting room of the Abu Houli family home in Deir al-Balah, in the central Gaza Strip. They are one of the few families who still follow the ancient traditions associated with coffee. Al-Monitor's correspondent visited them on the evening of Jan. 9.

Matar Abu Houli, 55, has been in charge of making coffee in the home for 30 years. He takes a long metal frying pan that they call al-mahmas, which contains green coffee beans, and places it over a wood stove. He moves the pan around until the beans acquire a dark color. "They only need [to roast] for 10 minutes, otherwise the coffee beans will burn," he told Al-Monitor. He then places the beans in a large clay pot and begins grinding them with a wooden crank called al-houn.

"The first thing that allows you to distinguish good coffee from bad coffee when you buy it is the beans. If they are large and full, then they are good. Second, you can tell by the odor released during roasting. Also, [it is good coffee] if a small amount of oil is emitted during roasting," Matar added, explaining that he puts cardamom seeds in the pot while it is boiling. 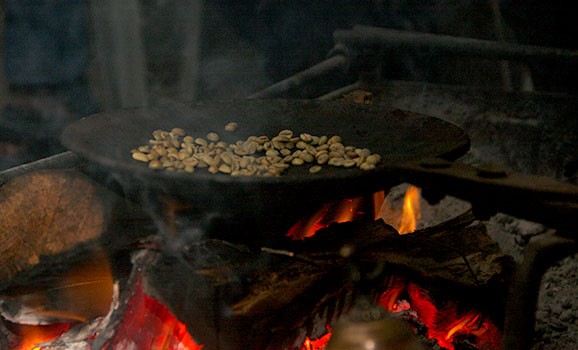 Young Jabar then pours those in attendance a second cup. They all agree that no coffee shops in the cities have coffee with the same taste as what they drink freshly brewed in their home.

The head of the family, Abdel Qader Abu Houli, 85, whose picture hangs on the wall along with ones of Yasser Arafat and Palestinian Authority Chairman Mahmoud Abbas, says that like other Bedouin families in Gaza, rituals surrounding coffee have brought them together for more than 100 years.

"I have never for a single moment given up roasting and drinking coffee, since it is a symbol of love and unity. Coffee has a special luster when it is prepared in front of guests, as the fire remains lit for 24 hours with the coffee pot above it," said Abdel Qader.

Coffee production in Gaza ranges from the old traditions to the latest production methods in the Badri and Haniyeh Coffee Factory, which was the second coffee production line in the Arab world, according to plant manager Mohammed Haniyeh. The first was in Algeria. During a tour of the massive factory, Haniyeh told Al-Monitor, "This production line cost us about $800,000. We bought it in 2004 from an Italian company. [After we began production], another line opened in Israel, then one in Jordan. Previously, there was a line in Algeria."

The strong smell of coffee emanates from the machines in the massive production line at the Badri and Haniyeh Factory in the Nasr district of Gaza. Coffee beans are roasted, ground and mixed in this facility, and finally sorted into six types, including special roast, blond and black. Machines then package the coffee in bags.

According to Haniyeh, the primary countries that Gaza exports coffee to are Brazil, Colombia, Costa Rica, Ethiopia, India and Kenya. The manager noted that according to the company's database, 6 tons of coffee are consumed [in Gaza] daily.

"Our company opened its first outlet for selling coffee in 1979. My father Fouad, my uncle Zuhair and their partner, Abu Ahmed al-Badri, were the first in Gaza to think about the idea of roasting and grinding coffee mechanically and distributing it to shops," Haniyeh noted. He explained that they are distinguished by the fact that they constantly develop [their brand]. There are even coffee shops named after their roast named "mode." They produce sweets and pastries.

Haniyeh attributes the increasing consumption of coffee in Gaza to the absence of other types of beverages and notes that there is a popular belief that coffee should be accompanied by a cigarette. It is difficult to enter a house or office in the Gaza Strip without drinking a cup of coffee, as is the case with tea in Egypt. In Gaza, coffee is rarely taken with sugar or milk.

Coffee is associated with the traditions of the Levantine peoples. The Lebanese pop star Samira Tawfiq sang about coffee in her rural dialect, instructing, "Pour the coffee and add some cardamom." Likewise, the Palestinian poet Mahmoud Darwish mentions coffee in "Memory for Forgetfulness," which was written during the siege of Beirut in 1982. "Conquerors can do anything. They can aim sea, sky, and Earth at me, but they cannot root the aroma of coffee out of me. I shall make my coffee now," he wrote. 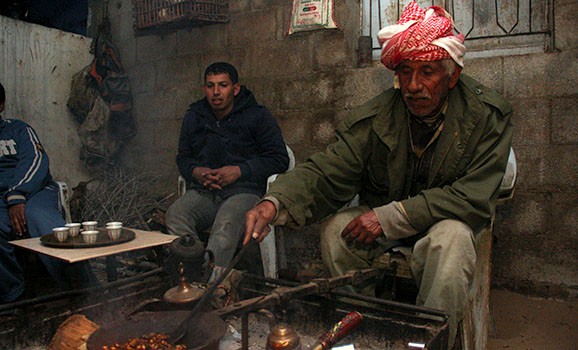 A search for the origins of coffee's story in Gaza reveals that one of the first people to open a coffee mill was Haj Hamdi Abu Shaban, in the old city of Gaza in the Zawiya Market in 1970. Shaban died several years ago.

Shaban's son Maher, with whom Al-Monitor met in his shop in the Zawiya Market, sold his father's store five years ago and now sells spices. "Since the distant past, coffee was brought to Gaza along with other spices and grains from Brazil and India. It cannot be grown here because the plants need a warm climate," Maher said. He believes that the taste of coffee is changing and had been better in the past.

Maher displays the small paper bags that his father used for packaging coffee after it was ground in his rudimentary mill. They display the name "al-Imtiyaz Coffee," under which there is an image of a cup of coffee and his father's name.

More than six different companies compete in the coffee production business in Gaza. Among these, Delice is the one that succeeded in linking culture to coffee. The owner of Delice is the novelist Ziyad Abdul Fattah. He told Al-Monitor, "When the company was founded in 1997, I thought to myself, 'Why are coffee shops not established as cultural [venues], before being [mere] investments?' So I decided to establish a cafe, where I produced Delice coffee. The name is derived from the French word for 'delicious' [délicieux]. With this coffee shop, I also introduced the culture of espresso coffee," Abdul Fattah noted.

Delice Cafe soon became a place frequented by Palestinian poets, artists and directors. They held discussions there over coffee, either mixed with cardamom or pure, like espresso.

Sitting in his cafe, Abdul Fattah explained, "The coffee industry has experienced some difficult years, especially during times of siege and when the border crossings were closed. It has been difficult to bring coffee into Gaza and [importers] struggle to maintain its flavor."

Abdul Fattah said that the main reason for the popularity of coffee in Gaza is that it is a drink associated with sadness and seriousness. Given events and the nature of life in Gaza, it is not uncommon to hear the sentiment, "I want a cup of coffee, because I'm tense and anxious today."