Dozens of young people roam a Jerusalem market every Thursday evening to help elderly people carry their grocery bags in exchange for life stories and tips on living. 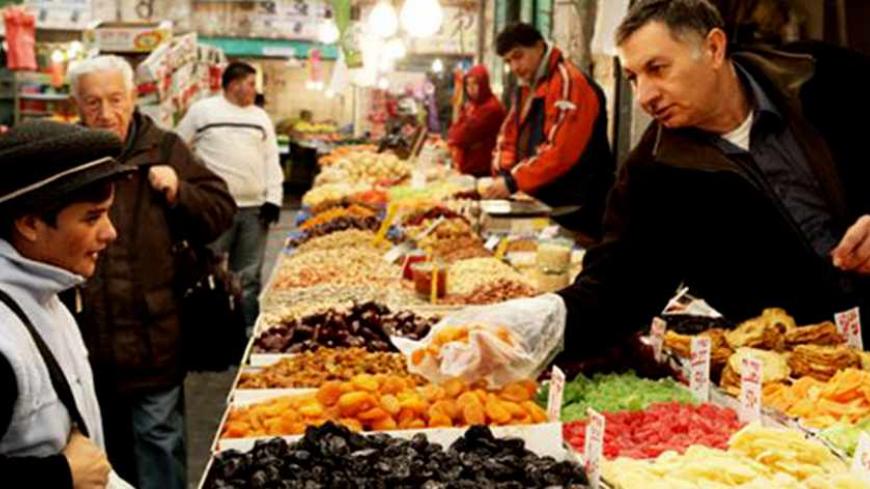 Slightly stooped and out of breath, an elderly woman puts her heavy plastic bags down on the sidewalk in the Machane Yehuda Market. Sivan Shimoni, 25, a student from Jerusalem who studies communications, rushes over to help her.

“I’m a volunteer with 'The Woman with Shopping Baskets,'” she says softly while pointing to her bright yellow shirt. “Can I help you carry your [bags] to the bus or light rail?”

The woman lowers her head and goes through all her bags. “But I don’t have any money left,” she mumbles, almost whispering in a thick Eastern European accent.

“You don’t have to pay anything,” Shimoni reassures her. “I’ll be happy to carry your bags for you, and if you want, you can tell me a little story about your life while we walk, or you can give me some advice for my life.” A tired smile appears on the old woman’s furrowed face. She seems to be standing a little bit taller now.

“My name is Dina,” she says, while Shimoni gathers up her bags. “When you get married, make sure your husband isn’t a cheapskate.”

It is 5 p.m. in early December when the Machane Yehuda Market in downtown Jerusalem is at its most crowded. The first winter chill wafts between the stands selling fruits and vegetables, baked goods for the Sabbath, spices and household goods. Yet, even among the huge crowd, it is easy to pick out the high school and college students, about 12 in all on this particular evening, wearing bright yellow shirts with "The Woman with Shopping Baskets" logo.

The initiative, under the auspices of the Hebrew University Hillel student organization, involves some 30 student volunteers who have been meeting at the market every Thursday for the past three years, between 5 and 7 p.m. to offer assistance. All they ask in exchange is a little story or a helpful tip to guide them through life. Yakir Partush, now 29 and a bio-technician, came up with the idea.

“When I was a first-year student, I saw an old woman in the market, who was struggling with some very heavy bags, so I offered to help her. I wanted to prove to myself and the woman that I wasn’t so weak, so I asked her why she didn’t ask for help. She told me that she had asked a few times, but that she was always told no. She realized that people in the market are always in a hurry, so she doesn’t ask anymore. That’s when it all clicked.” Partush also came up with the name, which is taken from a popular children’s song by the late singer Arik Einstein about a woman who comes back from the market and whose bags take up all the seats on the bus.

For their safety, the volunteers only accompany the people they help to the bus or light rail stops. They will walk them to their homes if they live close by. Nevertheless, Shimoni says that there is a real feeling that they have established a connection. “Some of them time their shopping to our exact hours. Some of them wait for us to approach them, but there are also some who ask for help directly. And not everyone just wants us to carry their bags for them either. Some of them really want to share their life stories and tell us about their lives before they came to Israel, about the creation of the state, about their children who died or about the good things that happened to them.”

The volunteers have accumulated quite a bit of practical local knowledge as well. “We already know who to ask. We can see it on their faces,” says Shimoni. “Usually, if we see an old man, one of the male students will go over to him, and not a female student, because even old men have self-pride.”

According to Partush, “As young people, we don’t always notice the elderly, because people tell us that the world belongs to us. It is not only the elderly who lose out because of that either. We also lose out. We don’t come here from a place that sees the elderly as being poor and helpless. As part of Generation Y, we were born into abundance. We are looking for ways to fulfill ourselves and also to contribute.”

Partush reminisces about one of the many experiences he had in the market. “I had gone with the same old man a few times already. He never got married. He had no children. He had no one. He told me that when I carry his shopping baskets for him, I am like the son he never had.”

The stories and advice are all written down in notebooks kept in the Hillel office. “One day, we’ll be able to publish a book,” says Idan Binyamin, 31, who is in charge of the project for the organization.

There’s something very young and Israeli about "The Woman with Shopping Baskets" project in the good, old sense of the word. News about the project has spread by word of mouth. There is very little organization, a few rules and little structure, but lots of initiatives. The budget is minimal, just a few thousand shekels a year, according to Binyamin, to cover the cost of shirts and other, similar expenses. The volunteers spend very little time talking among themselves or focusing on the various processes involved. “There’s an attitude of, 'Just get out there and start schlepping,’” says Partush.

There is also something very Jerusalem-like about this project, since it is taking place at the Machane Yehuda Market. While the market may have stiff competition from the markets in Tel Aviv and Jaffa, many people nevertheless would say that it still maintains its status as the finest in the country. Machane Yehuda got its start in the 19th century and still serves as the main market for the city’s residents. All sorts of workers’ neighborhoods sprang up around it, but they have been abandoned over the years. The people who live there now are often elderly and alone. Furthermore, a decade ago the market was the site of major terrorist attacks, and its prominence began to fade. People were afraid to go there. Its stands and stalls were left without customers.

By the time peace and quiet returned to the city, the market had changed. It is no longer the cheapest place in the city and hasn’t been for a long time. The major supermarket chains can afford to offer fruits and vegetables at a loss just to attract shoppers. The heavy baskets have been replaced with disposable plastic bags. More and more espresso bars, jewelry shops, gourmet ice cream stores and boutiques featuring designer clothing have popped up between the stalls and stands, attracting tourists and younger and wealthier consumers.

As in all the major markets around the world, current social, cultural and political trends converge at the Machane Yehuda Market in a "special Jerusalem mixture" (which is the name of a Jerusalemite rice and meat dish). Remarkably, Machane Yehuda preserves the blend of people and cultures unique to the city – Ashkenazim (Jews of Eastern European origin), Mizrahim (Jews of North African and Middle East origin) and other Jews and Arabs, including the secular and religious, and yuppies. Some people go to shop there every week, with memories of a lifetime at the market.

The volunteers are just as diverse. Shimoni is secular and wears skinny jeans. She often wanders through the market with Yuval Ben Har, 15, a student at the religious girls’ school in the settlement of Ofra, who dresses modestly, in a long skirt.

“I know it sounds kitschy,” says Ben Har, “but it really is fun here, not to mention all the offers I get from the old people who want to set me up with their grandsons.” Suddenly, she gets serious. “'The Woman with Shopping Baskets' program changed my attitudes, too. I come from a very nationalist society, and my political opinions are right wing. Before I started here, I might never have helped an Arab woman. Not a lot of Arabs come to shop in the market, but today I realize that an old woman is an old woman. It doesn’t matter where she’s from. Her baskets are still heavy.”

At the end of the shift, the volunteers all meet at Azura’s stand for a brief summary. Menachem Nakash, 59, who owns the stand, gives the volunteers a place to leave their bags and offers them hot drinks and tamarind juice.

“I grew up in this market,” Nakash says. “My grandfather came here from Aleppo, Syria, and the stand belonged to my father, who got his start as a peddler with a cart. I’ve seen a lot here, good and bad, and I’ve seen some terrible terrorist attacks. There were many occasions when I saw that the market was practically dead, but then it always came back to life, because people always come back here. It’s so typical of Jerusalem, with old and new, heavy stones and a light atmosphere, young and old together. It’s also these young people and the old people over there.”