Lebanese artist, musician and playwright Ziad Rahbani stirred controversy when he said in an interview that his mother, the acclaimed Lebanese diva Fairouz, was ‘fond’ of Hezbollah leader Hassan Nasrallah. 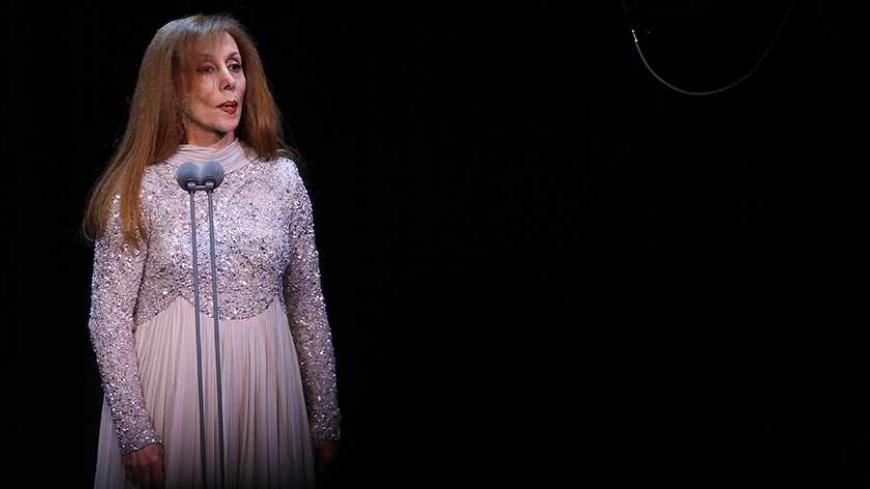 Amid all its political, security and economic concerns, Lebanon has now become the scene of an odd, heated debate involving Fairouz, Lebanon’s most famous singer, and Hezbollah Secretary-General Hassan Nasrallah. It's such a hot topic that leading politicians and various officials have felt compelled to chime in.

It almost goes without saying that anything related to Nasrallah or Hezbollah is cause for uproar in Lebanon these days. The conflict between his supporters and detractors has deep roots that even extend beyond Lebanon’s borders. The division is ubiquitous, touching on every aspect of daily life, everywhere. Yet, this does not explain the clamor that erupted around a statement attributed to Mrs. Fairouz, as the Lebanese and most Arabs call her, about Nasrallah.

The story began with a Dec. 17 interview conducted by the website Al-Ahed with Ziad Rahbani, the famous Lebanese artist, musician, playwright and son of Fairouz. During the interview, Rahbani, a harsh commentator and supporter of Hezbollah’s stance toward Israel was asked, “Does your mother share your support for Nasrallah’s espoused positions?” He responded, “Fairouz is very fond of Sayyed Hassan, although she will be displeased with me, as she was after my last television interview, when I revealed some personal information and she quickly interrupted me.”

Rahbani words created a media and social networking firestorm. In the following days, social networking pages were awash with comments about his statement, supporting or disparaging them to the point of every Lebanese being fixated on the issue. Nasrallah himself even alluded to it in a speech on Dec. 20, although without mentioning names. He noted with a smile, “An educated highly respected thinker and artist, who maybe espoused different ideologies, might disagree with you on political matters, but personally have [a] fondness for you, because of your character, conduct, sacrifices and so on. If such a person were to say that he or she liked someone, then all hell would break loose.”

Following Nasrallah's statement, parliament speaker Nabih Berri joined the discussion preoccupying the country. Why the clamor? To understand it, one must examine a number of related issues.

First, Fairouz is the most famous Lebanese singer ever, bar none. She is a national symbol, an inimitable national icon in the eyes of a great number of Arabs. Fairouz does not give press or media interviews, nor has she issued a statement in decades, perhaps as a byproduct of maintaining her image. Thus, her “absolute silence” has become part of her legend.

Furthermore, Fairouz was the voice behind the works presented by the Rahbani Brothers, Assi and Mansour, her late husband and brother-in-law, entertainers who helped create the artistic heritage associated with Lebanon’s national identity. After the civil war erupted in 1975, Assi and Fairouz’s son, Ziad Rahbani, emerged as a unique specimen on the Lebanese artistic and political scene, setting out on an unwavering theatrical and political course that earned him great celebrity. At one point, it seemed as if he would break away from his “Christian milieu” in his espousal of communist ideals and become involved in the political and artistic struggle to advance them.

In the past few years and after the understanding signed between the Christian leader Michel Aoun and Nasrallah, the battle between opposing Christian factions intensified, as the Saad al-Hariri camp and Hezbollah endeavored to attract that populace to their respective sides. The battle mutated into malevolent hostility once the Syrian crisis began, and both sides entered the fray, hurtling accusations at one another.

In this context, amid a heated race to win over Christian public opinion, Rahbani's statement about his mother being fond of Nasrallah seemed to favor one position at the expense of the other, perhaps settling the conflict in its favor, or at the least, giving one camp a leg up over the other. Fairouz being a supporter of Nasrallah’s positions means that the political performance of Hezbollah’s secretary-general has been in line with the national tack of the Rahbani brothers’ works, conforming with the national identity embodied by the heritage that both men created.

In addition, the now-famous words ignored a tradition long held by Lebanese artists to refrain from publicly committing to a particular political track and supporting a political personality, party or faction. This was done for various reasons, not the least of which were financial and commercial. The real market for Lebanese artists is an Arab one, particularly in the Gulf. This situation historically imposed upon artists the need to seek the favor of the oil emirs and respect their power to safeguard their artistic interests. In part in accordance, one prevalent phenomenon among Lebanon's artistic communities was for an entertainer bearing a Christian name to change it and assume a pseudonym devoid of religious affiliation or one that could be construed as Muslim to facilitate the commercialization of their works in Arab markets, especially in the Gulf.

On the Lebanese scene, artists have contented themselves with adopting general, superficial “national positions” on some occasions, such as praising the Lebanese army or extolling the virtues of high-ranking government officials, such as the head of state. On the other hand, artists siding with a particular political party before general elections or during political campaigns, as is the norm in the West, was frowned upon.

All these taboos were broken by Rahbani when he talked about Fairouz and Nasrallah, leading to all hell breaking loose. Rahbani’s statement affirmed, or reconfirmed, a number of things. First, that political hatred in Lebanon has reached its apogee, with the country’s populace not able to bear hearing that someone liked a person who was not part of their deep-rooted political alignment. Second, art committed to a cause — or an attempt to draw Lebanese artists into public affairs and have them proclaim their commitment to causes that affect their compatriots, societies and country — remains an impossibility in Lebanon. The richest “client” of these artists remains Gulf cash, not a national or artistic “message” in need of championing. Third, the “battle” is not yet over. Rahbani is expected to appear on television in a few days and will surely stoke the still-simmering flames of this debate.