A number of recent cases have shown that medical errors, often leading to the patient’s death, have gone without punishment in the Gaza Strip. 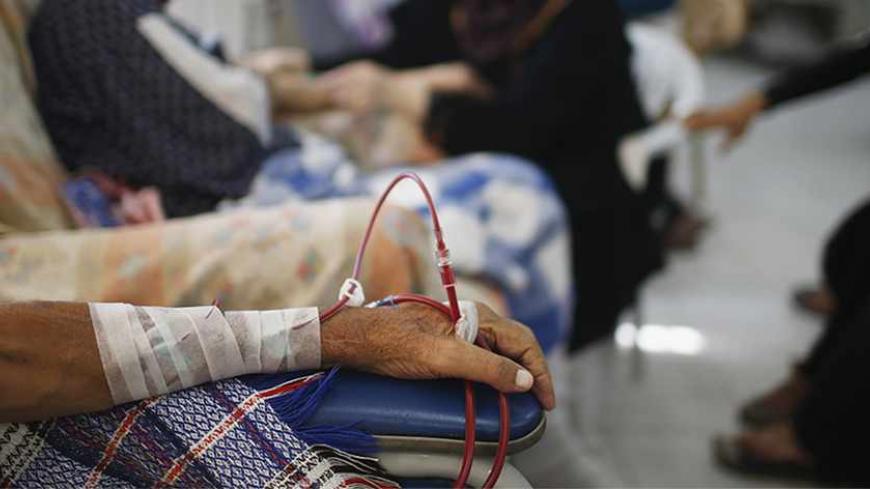 When Miriam al-Tawil, 75, entered the operating room in the Al-Aqsa Hospital in the central Gaza Strip Oct. 20 after breaking her left femur, she had no idea she would never return home. The medical staff had assured her family that it would be a simple procedure that would not take more than a couple of hours. However, four hours later, Miriam was transferred to the intensive care unit, where she went into a coma and later took her last breath. The doctors who had been present in the operating room turned off their mobile phones and disappeared.

This is how Ibrahim al-Tawil described what happened to his mother. He said, "We were shocked. All of the tests my mother had undergone before the operation confirmed that her heart was healthy and her blood pressure and blood-sugar levels were excellent. After we collected some information from the hospital, we learned that three medical errors had occurred. So we submitted a complaint."

Speaking to Al-Monitor, Ibrahim explained that the first error was that the doctors had not inserted a catheter to drain urine from his mother's bladder. Her family had noticed this. Second, they administered a half dose of anesthesia, and later on, they gave her a full dose. Then, "During the operation, a nurse came out, looking for a hospital worker to bring an oxygen tank. When he didn't find anyone, I went myself and brought him one from the ICU," said Ibrahim.

Miriam is not the only patient who has fallen victim to medical errors. Abdul Rahman Saliha, 4, died on Sept. 9 following an overdose of chemotherapy in the Abdel Aziz al-Rantissi Children's Hospital in Gaza City.

The child's father, Ahmed, told Al-Monitor that his son was diagnosed with first-stage blood cancer and was undergoing chemotherapy at Al-Mutala Hospital in Ramallah. The doctors at Al-Mutala told him to finish the treatment at Abdel Aziz al-Rantissi Children's Hospital in Gaza.

"On Aug. 22, Abdul Rahman received chemotherapy treatment at al-Rantissi. Three days later, his skin began to peel, his situation deteriorated and he was bleeding from all openings of his body, even his eyes," said Ahmed.

Abdul Rahman's grandmother, Ibtisama, described their ordeal to Al-Monitor. She said, "When we showed his skin to the doctors, they gave him two allergy shots. But his situation deteriorated, and they moved him to the ICU. There, they told us that he had improved and we could feed him. So we gave him chicken soup."

Ibtisama, who is the chair of the Aid and Hope Association for Cancer Patients Care, said that her grandson was then transferred to the Tel HaShomer Hospital in Israel. They were shocked by the results of medical tests carried out there. They showed that Abdul Rahman's internal organs — including his kidneys, liver and lungs — had been burned by excessive chemotherapy. Moreover, the food that he had eaten following the doctor's orders was decaying in his body. It came back up from his throat, because he had no stomach or intestines to digest it.

Overcome with tears, Ibtisama explained that her grandson died before her eyes. She recounted, "A week after the funeral, I went to an official in the Department of Hematological Oncology at al-Rantissi Hospital and accused him of killing my grandson. He replied that [my grandson] was sick and would have died anyway. I told him I wasn't stupid and knew that those with blood cancer can live many years. He scoffed at me and said, 'If I am 1% responsible for the death of your grandson, I'll pay you $100,000.'"

Another case involved Aref Abu Hasira, 43, who died on July 24 after a bout with thyroid cancer. Al-Monitor met with his father, Mohammed, in his home. He explained that his son had undergone testing in Israel that showed his cancer had gone into remission. The doctors suggested he get an injection that they claimed would prevent the cancer from returning.

"Before getting the injection, my son came to speak to me. He was nervous about it, but in the end, he went to Al-Shifaa Hospital and got the injection. After getting two injections in his back, he went into a coma and died about nine days later," Mohammed said. "We received information that the nurse had placed two needles in front of the doctor and then left. The doctor then injected [my son] in the back. However, one of them was supposed to be injected into a vein," he added.

Mohammed said that the health minister came to offer his condolences, accompanied by a medical delegation. The minister admitted that an error had been made in giving the injection. However, a week later, when Mohammed visited the minister in his office, the latter denied admitting responsibility.

Errors are common in medical work

Saeed al-Bata, a legal adviser from the Ministry of Health, told Al-Monitor in a meeting at his office that medical errors also occur in developed countries, for errors are a common part of medical work.

Regarding the mechanism for dealing with patients, Bata said that in accordance with the law, they receive complaints from citizens themselves, the Legislative Council, the public prosecutor or human rights centers. He noted that the Ministry of Health has a department for receiving complaints.

"After [receiving the complaint], the minister forms a specialized technical committee to investigate the complaint. The committee takes statements from those who submitted the complaint as well as from doctors who are involved. The committee can choose [to take a statement from] whoever they deem necessary," Bata added, pointing out that in the past the committees included representatives from human rights centers.

He said that after the investigation is complete, it is submitted to the minister. If it is established that errors or negligence occurred, appropriate measures are taken and punishment is imposed in accordance with the Civil Service Law.

Regarding the cases above, Bata said, "We did not receive any complaint from the Tawil family. With regard to the Saliha family, the committee is completing the procedures of the investigation. The report will be presented to the minister of health in the coming days. The same is true for the Abu Hasira family."

Bata explained that if negligence is proven, the punishments range from a reprimand to dismissal. He confirmed that there were 10 pending cases against the Ministry of Health alleging medical errors.

Speaking to Radio Al-Aqsa Nov. 26, Hassan Ashour, the director-general of Al-Shifaa Hospital, said that he does not have the power to make a decision against or impose a punishment on a doctor who errs. He explained that the maximum penalty he can impose is a reprimand or issue a written warning, or a transfer to another hospital if it involves a serious mistake.

According to a report issued by the Independent Commission for Human Rights (ICHR) titled, "The Human Rights Situation in the Areas of the Palestinian Authority in 2012," the commission received 30 complaints regarding medical errors in 2012, including eight cases in which the error resulted in the death of the patient. This is compared to 25 complaints in the period from 2010 to 2011.

In the report, the ICHR confirms that it followed up with the Ministry of Health and asked it to form a specialized medical committee to carry out a thorough investigation. Yet despite repeated requests, the investigations are still insufficient. The report points out the lack of legal provisions for medical errors committed by medical professionals.