As the political conflict escalates in Egypt, some are calling for a national reconciliation, yet many obstacles stand in the way. 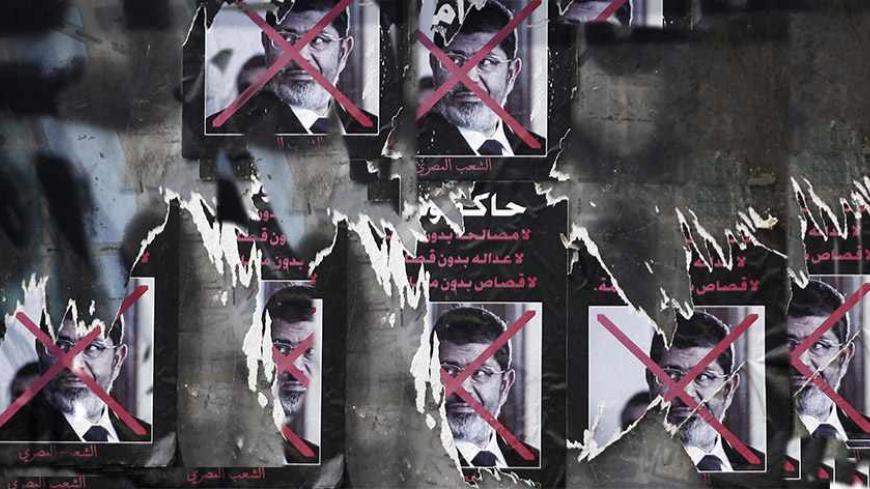 Torn posters of ousted Egyptian President Mohammed Morsi are seen on a wall at Tahrir Square, Cairo, Sept. 26, 2013. The poster reads, "To be on trial ... No reconciliation without justice, no justice without retribution, no punishment without trial." - REUTERS/Amr Abdallah Dalsh

As the political crisis escalates in Egypt between the ruling authorities, the majority of Islamic movements and the Muslim Brotherhood and civil forces, there have been increasing calls for a national reconciliation framework involving all the country's conflicting parties to halt the bloodshed and achieve political and social stability.

According to Mohammed Osman, political liaison officer for the Strong Egypt Party, reconciliation requires every party in the equation to recognize the right of others to carry out political work without marginalization or exclusion. He asserted that the current authorities in Egypt are not doing this, but instead are relying on a security approach to confront opponents.

Osman told Al-Monitor that as a result of the instability affecting Egypt, reconciliation is currently out of the question, especially since the strongest parties in the conflict — the military and the Muslim Brotherhood — are both preoccupied with the upcoming constitutional referendum. The army wants passage of a new constitution, while the Brotherhood is trying to ensure its failure in hopes of toppling the military. Osman believes there will be no talk of reconciliation initiatives until after the referendum.

An alliance, not reconciliation

Wael Khalil, a political activist, told Al-Monitor that national reconciliation can only take place between the parties struggling for power, which in Egypt's case are represented by the army and the Muslim Brotherhood. The convening of a reconciliation conference between them would be determined on the basis of the ability of each party to overcome the other.

Khalil noted that there was a possibility that Islamic forces who opposed the June 30 Revolution could form an alliance with the other groups that support the road map of the current government. Such an alliance would ensure the representation of all parties and would not exclude anyone from participating in the political process. Khalil, however, thinks such an alliance is unlikely because, as he saw it, civil forces had attempted to form an alliance with the Muslim Brotherhood during Mohammed Morsi's presidency, but the only thing they got in return was exclusion and incitement against opposition parties.

Ali al-Khafagy, a member of the Muslim Brotherhood and the National Alliance to Support Legitimacy, told Al-Monitor that those claiming that the Brotherhood abandoned its companions from Tahrir Square during certain stages of the revolution — such as the clashes on Mohammed Mahmoud Street —had themselves abandoned the Islamists after the military coup on July 3. According to him, they did not support the Islamists after they were subjected to killings and arrests in the attacks in Rabia al-Adawiya and al-Nahda square.

To open a new chapter, Khafagy contends, all parties must admit to their lapses and recognize that they have wronged others. He confirmed that there are currently efforts to open a dialogue between the Brotherhood and a number of revolutionary forces. The talks would be aimed at overcoming past disputes and agreeing on common ground, based on the goals of the January 25 Revolution — "bread, freedom and social justice." Khafagy said that the Brotherhood is reaching out to anyone who wants to cooperate with it on reconciliation, based on the aforementioned foundations and without demanding the recognition of the road map or the so-called June 30 Revolution.

Khafagy declined to provide details related to the Brotherhood's contacts with civil parties, saying only that the Brotherhood is having difficulties in communicating with these forces, so it has not been an easy pursuit. He noted that the Anti-Coup Alliance — involving first and foremost the Muslim Brotherhood — will not communicate in an official manner with any of the parties that support the military coup. This includes, for example, those parties whose members are participating in the current government or in the committee drafting a new constitution.

Reconciliation without the Brotherhood

Farid Zahran, vice president of the Social Democratic Party, wondered if it is even possible to reconcile with the Muslim Brotherhood. According to him, while the Brotherhood has a new supreme guide and is now under the leadership of Mahmoud Ezzat, the group's mentality remains unchanged. The Brotherhood insists on rejecting the road map and acknowledging that what happened on June 30 was a popular revolution.

Speaking to Al-Monitor, Zahran said that reconciliation requires a political foundation to be established between the parties. If such a foundation does not exist, it is not possible to move forward with an attempted reconciliation. He confirmed the possibility of reconciliation among all forces in Egypt — except for the Muslim Brotherhood. Stressing the potential of national reconciliation to succeed, Zahran invoked Algeria and Lebanon as two cases from which Egypt might draw lessons.

Reconciliation experiences in Algeria and Lebanon

In September 2005, a large majority of Algerians supported a partial amnesty proposed by President Abdelaziz Bouteflika for hundreds of Islamic militants who had been involved in violence. The proposal aimed at ending the conflict responsible for Algeria's "black decade."

The conflict had began in January 1992, following the government's rejection of the results of the 1991 legislative elections. The Islamic Salvation Front appeared to have achieved certain victory, pushing the Algerian army to intervene to nullify the results out of fear of the Islamists' win. As a result, various groups, such as al-Takfir wal Hijra, the Armed Islamic Movement and the Islamic Front for Armed Jihad, decided to take up arms against the government and civilians. The actions carried out by these groups led to the deaths of thousands of Algerians. The most notable of these massacres took place on Dec. 30, 1998, in Relizane, where 1,280 civilians died, and on Aug. 28, 1997, in Rais, where 400 people were killed.

There were numerous parities to the Lebanese conflict, with alliances shifting throughout the course of the war. The most prominent parties were the Lebanese Army, the Phalange Party, the Amal Movement, the Palestine Liberation Organization, Israel and Syria.

Khalil, the political activist, believes that reconciliation in Egypt is inevitable. It must happen sooner or later, but it will of course differ from the experiences of Algeria and Lebanon, which suffered large amounts of bloodshed. Egypt, however, has not experienced a civil war, and some would argue, such armed violence is not characteristic of Egyptians.