In an exclusive interview with Al-Monitor, founder of the Egyptian Tamarod Movement Mahmoud Badr stresses that despite claims to the contrary, the new constitution further limits the army’s purview. 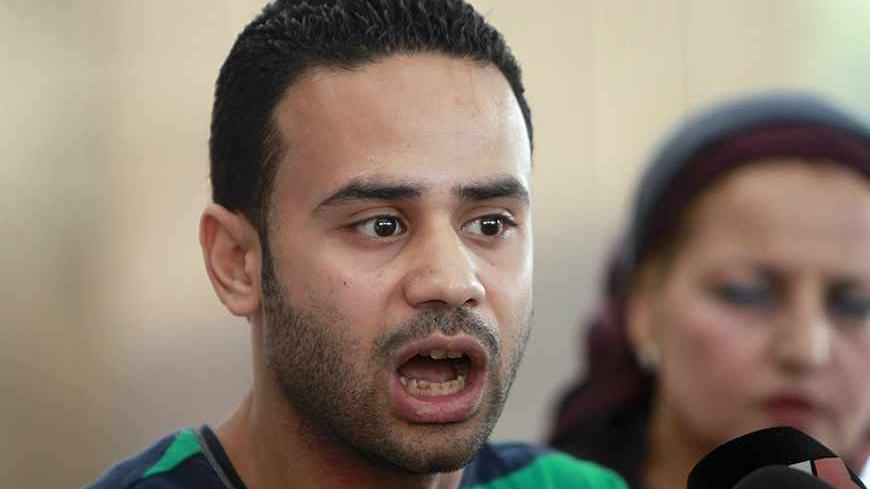 In an exclusive interview with Al-Monitor, Mahmoud Badr, the founder of the Egyptian Tamarod Movement, said that the military did not get any special privileges in the proposed new Egyptian constitution. Rather, the opposite is true when comparing with the other Egyptian constitutions since 1923. Badr clarified that the Tamarod Movement's closeness with the army stems from the fact that they are partners in implementing the Egyptian road map. He pointed out that the current phase Egypt is experiencing cannot handle talk about canceling the Camp David Accords with Israel. According to Badr, the articles of the agreement should be reviewed, but in the future.

Here is the text of the interview:

Al-Monitor:  Your demand for the cancellation of the Camp David peace accords between Egypt and Israel came at a time when there were reports of Egyptian-Israeli military cooperation on the Gaza border to confront jihadist elements. Doesn't your position contradict that of the army? And how would you assess the possibility of Egypt cancelling the peace treaty?

Badr:  The Tamarod Movement's official position consisted of calling for a campaign demanding a halt of US aid to Egypt. The movement never addressed the cancellation of the [Camp David] Accords in any way. In my personal view, at this stage the articles of the Camp David Accords need to be totally reviewed. But this could come at a later time, not in the current stage we are experiencing. The current stage cannot handle this, but in the coming stage, it may be possible to review the accords. I hope this will happen. Thus, the question about our demand to cancel the accords is invalid, because currently, we have no official position on the accords.

Al-Monitor:  The most recent poll carried out by the Zogby Institute showed that the Tamarod Movement performed better than other Egyptian political parties. However, two-thirds of Egyptians are still worried about whether or not the government can deliver on its promises and secure a more inclusive democracy. Are you worried that public opinion could turn against you at any moment if improvement is not achieved at the political and economic levels?

Badr:  We believe that the United States does not act in the interest of the Egyptian people in any way, nor in the interest of the Arab people. This is why we took this position. [The US] position was very clear; they objected to the will of more than 33 million Egyptians who took to the streets with their demands. They challenged their will and stood against the Egyptian people. Therefore, from the beginning, our motto has been "national independence," and we called for this slogan when it comes to foreign policy. We call for applying the principle of making peace with those who make peace with us, and being hostile to those who are hostile toward us. We are very happy with the Egyptian-[Russian] rapprochement, but in no way do we want to replace subservience [to one country] with subservience to another. We want Egyptian foreign policy to take a balanced position when it comes to all parties — a position that recognizes the role and value of Egypt.

Al-Monitor:  You have publicly supported the Syrian army, yet at the same time, the ruling Egyptian military administration has expanded its relations with Gulf countries that strongly oppose the Syrian regime. What do you make of this? How can Egypt balance its relations with the Gulf states on one hand, and Syria and Iran on the other? How do you envision Egypt's regional role in the future?

Badr:  That did not happen. I have never supported Assad in any way.

Al-Monitor:  What is the basis for what has been attributed to you in this regard? Many media outlets have reported this claim.

Badr:  I announced that I support the peaceful Syrian revolution. I also said that I believe the solution in Syria involves putting an end to the Assad gang forever, as well as forever putting an end to the armed gangs facing the revolutionary people. This means that, in the end, it is in no one's interest to destroy the Syrian army, save for its enemies abroad. Yet the solution also does not involve the continuation of this dictatorial regime that involves oppression either by or against the Syrian people. Rather, the solution is ending these gangs coming from Afghanistan and other places to fight the Syrian people themselves and to spread sectarianism there. It also involves putting an end the Syrian regime.

I believe that relations between Egypt and the Gulf are on the right track. I prefer to talk about the Arab world. For when "great Egypt" returns, the entire Arab world must be with it and around it. In the end, no Arab country will have value without the presence, support and weight of Egypt. Likewise, Egypt will have no value without the Arab world. [Egypt's status and that of the wider Arab world] are linked intrinsically. This means if we think about the type of country we dream of, it would be a country fully integrated with the Arab [world], would have an "African depth" and would have relations with the countries of the Islamic world. These are the three aspects comprising the framework the Egyptian Foreign Ministry should act within.

We are very happy with the rapprochement with Arab states. We hope that Qatar takes a look at itself and realizes that Egypt is powerful. It seems to me we have kebab and kofta shops in Egypt that are older than the state of Qatar. Thus, they must understand that if they lose the Egyptian people and the Egyptian state, they lose everything. However, if they embrace and support Egypt so that it can return to what it once was and regain its pioneering role, I think that will benefit the entire Arab world.

Al-Monitor:  What do you have to say to those who believe that the constitutional amendments made by the Committee of 50 gave the army many privileges and provide for very little oversight of the army's power? Do you think that Egyptian democracy can develop when the military is able to interfere in the political affairs of the country as they wish?

Badr:  No, I need someone to tell me: What are these additional privileges gained by the army? For example, with regard to military courts, the text of the 2012 constitution talked about what "harms" the military forces in very general terms. This means that if I was driving in the street and accidentally bumped into an officer, it was possible to charge me in a military court, because I had "harmed" the armed forces. Now, however, the recently ratified text specifies the cases where this applies. For example, this includes assaulting an officer of the armed forces while he is on duty. This is a huge difference. For example, Shikabala [Mahmoud Abdel Razek Fadlallah], a player for the Zamalek soccer team, got into a fight with a pilot, and — I think — he will be tried in a civilian court, not a military one. However, a direct attack on the armed forces — including their equipment or barracks — is considered something that is subject to a military trial. For this reason, I think that this constitution restricts the armed forces. If we compare this constitution with the 1923 constitution — which spoke about the military judiciary and the military courts — and all the other constitutions up until now, we see that there is a lot of progress in this constitution, and it's the best one.

It was recorded in the minutes of the session to vote on the articles on military trials that if we were in normal conditions [the committee] would vote on a text as follows: "It is prohibited to try civilians before military courts." That's it. But unfortunately there are exceptional circumstances, and the military judiciary itself has become a part of the nature of the Egyptian judiciary. The constitutional court even ruled that [the military judiciary] is a "normal" judiciary and not an "exceptional" judiciary. Thus, given the circumstances we are in — and with the recent assault that killed dozens of soldiers — these exceptions should be limited so that they do not harm civilians, and so that our confrontation is with the terrorists alone.

Badr:  I think that some see us as being close to the military because we are part of the road map. If you review the text of the road map, you’ll see that the wording included the term, “We the conferees have decided. …” These conferees were the army, Tamarod, Dr. Mohamed ElBaradei and representatives of women, the Coptic Church and Al-Azhar. All of those who were present are partners. We are not very concerned with these types of accusations.