US Secretary of State John Kerry will join the P5+1 talks in Geneva amid expectations of a possible deal. 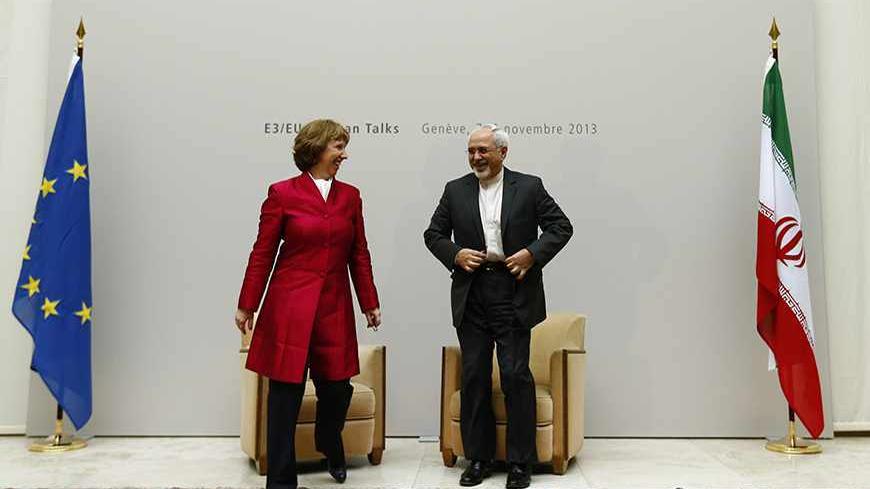 GENEVA — Iranian Foreign Minister Mohammad Javad Zarif said he planned to draft a framework with representatives of six world powers — the five permanent members of the Security Council and Germany, or P5+1 — on Friday, while negotiations seemed to gather such pace that there was a talk that an agreement could even be signed on Friday or Saturday. US Secretary of State John Kerry will travel to Geneva Friday to join the talks, a US official confirmed to Al-Monitor late Thursday.

“Secretary Kerry will travel to Geneva, Switzerland, on Friday at the invitation of EU High Representative [Catherine] Ashton in an effort to help narrow differences in negotiations,” the senior State Department official said.

"We are talking about a framework agreement that includes three steps: objectives, end game, and a first step," Zarif told Al-Monitor in an interview Thursday, one of a series he gave in his Geneva hotel at the conclusion of the first day of a new round of nuclear talks that were stunning for their sense of new-found, high-speed momentum after years of no progress.

"If there is political will, it is not so difficult," Zarif said. "We are hopeful we can do it. My preference is to be able to move forward quickly."

Zarif said significant progress on the outlines of a framework deal had been reached at meetings over the past three weeks, including at technical talks in Vienna last week. In the course of the past three weeks … the ingredients of each step have been more clearly defined," Zarif said.

"Maybe we are still at the recipe stage," he said, regarding what reciprocal steps the six powers might offer Iran in exchange for Iranian steps to restrain its nuclear program. "We know the ingredients, and the right amount of each ingredient in the recipe."

On Thursday, Zarif had breakfast with European Union foreign policy chief Ashton, then headed the Iranian delegation at a brisk, 45-minute plenary meeting with diplomats from the P5+1. Then the Iranian team, headed by Zarif's deputy Abbas Araghchi, proceeded to hold four one-hour meetings, first with three European powers, then with the Russians, then with US. team, led by Undersecretary of State Wendy Sherman, and then with the Chinese.

"We had a good plenary," in which all the delegations expressed the desire "to find common ground in order to move forward," Zarif said. "Then we had rather long bilateral discussions."

Next comes "starting serious draft writing," Zarif said. "We know the challenge: just putting on paper all these discussions. … We will already have made good progress. Whether it will be enough to sign a joint communique in the afternoon, it all depends on how much progress" is made Friday.

Asked if the sense of momentum towards a framework deal after years of little or no progress was an illusion, Zarif said he didn't think so, but cautioned there were still many potential obstacles.

"I think we're on the right track," he said. "It's a very difficult stage we are in — trying to put … that which was said [sometimes] informally [in meetings] on paper, to have consensus."

"We should not prejudge the outcome," Zarif said. "The general trend is positive."

"If there is political will, it is not so difficult," he said. "We are hopeful we can do it. My preference is to be able to move forward quickly."

An hour or so after Zarif spoke on Thursday, lead US negotiator Wendy Sherman, returning to the diplomats' Geneva hotel, had an impromptu tete-à-tete with Iranian deputy foreign minister Araghchi, after encountering him in front of the elevator. The two diplomats spoke for a few minutes in a hallway off the lobby before Sherman went up.

Araghchi earlier told Al-Monitor in a brief interview that his team's one-hour meeting with Sherman and the US negotiating team Thursday was "very useful and productive."