Contrary to what some may believe, a vibrant indigenous visual arts tradition does exist in the Gulf. 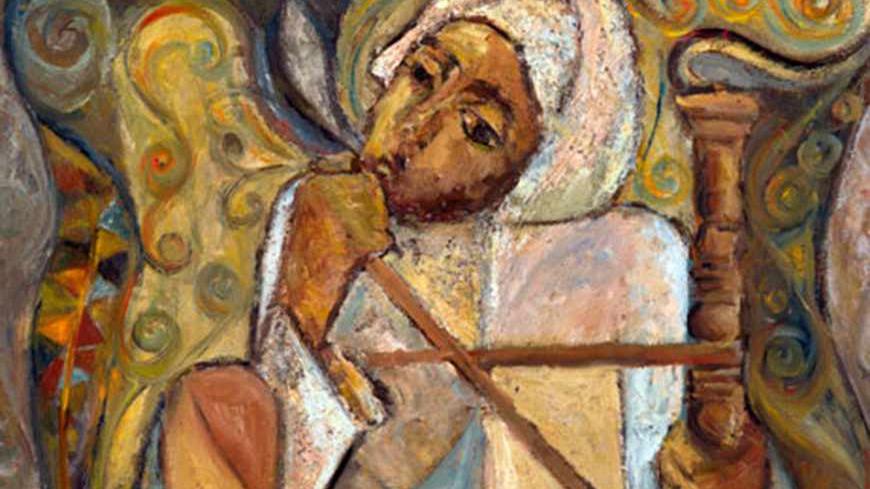 An oil painting by Jassim Zaini titled, "The Narjeela (Water Pipe)" from 1974 is shown. - Mathaf

On Oct. 25, after a brief visit to the region, a Wall Street Journal writer declared, “The Arabic-speaking part of the Gulf has essentially no indigenous tradition of visual or plastic arts.” It isn’t the first time that the modern art movement in the Gulf was dismissed by those who don’t know better. In fact, modern art as defined in the West stretches back several decades across the Gulf with multiple generations of artists.

According to Maha al-Sinan, 1958 saw the first public art exhibition held in Saudi Arabia. The most famous of the many Saudi art pioneers was the sculptor and painter Abdul Halim al-Radwi, who studied at the Academy of Fine Arts in Rome in the 1960s and whose art is part of art museums in Brazil, Jordan and Spain among others. Radwi was known for having refused a substantial sum of money to sell an artwork that won an award at the 1988 biennial in Spain opting instead to have it displayed in his own art museum in Jeddah. Among Radwi’s two dozen or so peers were pioneering women including Safia bin Zagr and Muneera Mousli, who went on to exhibit in Europe and the Middle East. Today, 400 of the 650 students at the King Saudi University College of Art Education are female.

In 1958, Kuwait also held its first pan-Arab art exhibition, which tackled themes such as colonialism and underdevelopment. Kuwait today hosts a successful art museum that also doesn’t shy away from relevant political themes. The country’s first art gallery was inaugurated in 1969 with a joint show of Munira al-Kazi and Issam al-Said, two leading artists from Kuwait and Iraq respectively. The Sultan Gallery went on to host the likes of Andy Warhol and Syria’s Fateh Moudaress.

Abdallah al-Qassar, one of Kuwait’s leading landscape and portrait artists started exhibiting as early as the late 1950s and won awards in Egypt, where he studied the early 1960s. Qassar’s pioneering peers included surrealist Mohamed al-Shaibani who critiqued elements of development of the Gulf and acclaimed sculptor Sami Mohammed who was a founding member of the Kuwaiti Association for Plastic Arts in 1967.

The earliest recognized visual artist in Kuwait and most probably the Gulf region to have studied art was Mojib al-Dosari who was orphaned as a child before living with his uncle in Basra. Dosari became the first Kuwaiti to study visual arts in Egypt and continued his studies in London. Born in 1922, Dosari advocated for visual arts in Kuwait through writing in Al Bi’tha magazine that was targeted at Kuwaiti students abroad. Sadly, Dosari died at 34, after only two years of teaching in Kuwait. Only 13 of his works of art are known to have survived.

Mohamed, the pioneering Kuwaiti sculptor, told me the tradition of drawing in Kuwait and the Gulf goes back over a century when dhow builders would employ an artist to sketch a ship using charcoal before it was built. These images were almost never preserved and the earliest one he saw dated back to before the discovery of oil in Kuwait in the 1930s. The same process was also employed when building houses, especially for merchants with the intricate Gulf style of architecture.

According to Mohamed, the advent of Egyptian and Palestinian teachers to the Gulf in the 1950s was a contributing factor to the launch of the modern visual art movement in the Gulf as we know it. “Our Egyptian teacher Mr. Mansour at the Al Sabah School told us to prepare the stage to commemorate the Tripartite Aggression on Egypt and the battle of Port Said in 1956,” Mohamed recalled, who was only 13 then. Mohamed created the background figures consisting of soldiers, women and children for the play from the little material that was available. His figures were so well-constructed that Mohamed said, “The school gave me the first prize, a dry ink pen, which I was so proud to win.” Mohamed  went on to be one of the most accomplished artists in the Middle East winning numerous international awards.

Many other parts of the Gulf also benefited from the arrival of teachers and the introduction of the modern schooling system. However, another factor that contributed to the development of the region’s visual arts industry was another industry altogether, the discovery of oil around the mid-20th century. For instance, Bahrain Petroleum Company commissioned artists from the country, including the acclaimed Abdulla al-Muharraqi, to commemorate the drilling of the first oil wells back in the early 1950s.

Mathaf: The Arab Museum of Modern Art in Qatar, whose collection includes thousands of Arab works of art, held an exhibition called Swalif (Gulf dialect for “friendly conversation”), which museum officials told me was the most successful exhibition held at the museum, showcasing 23 pioneering Qatari artists including Jassim Zaini and Abdulwahid al-Mawlawi whose artworks date back over half a century. In the eastern Gulf, Oman’s Anwar Sonia is widely regarded as the founder of the modern art movement in the sultanate having won the country’s Golden Prize Medal for art in 1983.

Some of the best artworks of Abdul Qader al-Rayyes from the United Arab Emirates (UAE) dating back to the 1960s can be found at the Kuwait Modern Art Museum and with private collectors there. Rayyes, whose first art participation was at Kuwait’s Spring Exhibition in 1965 was a frequent visitor to Kuwait’s “Free Studio” co-founded by Mohamed along with other art pioneers. The UAE is also home to one of the Gulf’s pioneers of conceptual arts, Hassan Sharif, who like many other modern artists in the Gulf started as a caricaturist at a local newspaper.

Furthermore, art in the Gulf had a broader meaning altogether and included singers, poets, musicians, calligraphists, actors and craftsmen of all types who would build intricate wooden treasury boxes and furniture, paint on plates and sides of mirrors, blow bottles of Arabic oud (agarwood) perfume, stitch colorful women’s garments and gold and silver jewelry and create some the most beautiful pearl necklaces in the world. These crafts are all very much artistic and visual.

Today, the Gulf states are vibrant centers of not only the Arab artistic community but also Persian, South Asian and Turkish art. The Sharjah Art Biennial, the Dubai and Abu Dhabi Art Fairs, the Edge of Arabia art collective from Saudi Arabia and the Qatar, Sharjah and Kuwaiti art museums are a testament to this movement that started three-quarters of a century ago, despite most states being under the British “protectorate.”

The Gulf states are now witnessing the fourth generation of visual and plastic artists enter the art industry. These young artists have a legacy to follow that was started by Dosari, Mohamed, Radwi, Muharraqi and Rayyes among many others who demonstrate that — contrary to what some may believe — there very much does exist a vibrant indigenous tradition of visual and plastic arts in the Gulf.