Another Egyptian president on trial

A dangerous and profound rift in Egypt will not be healed soon. 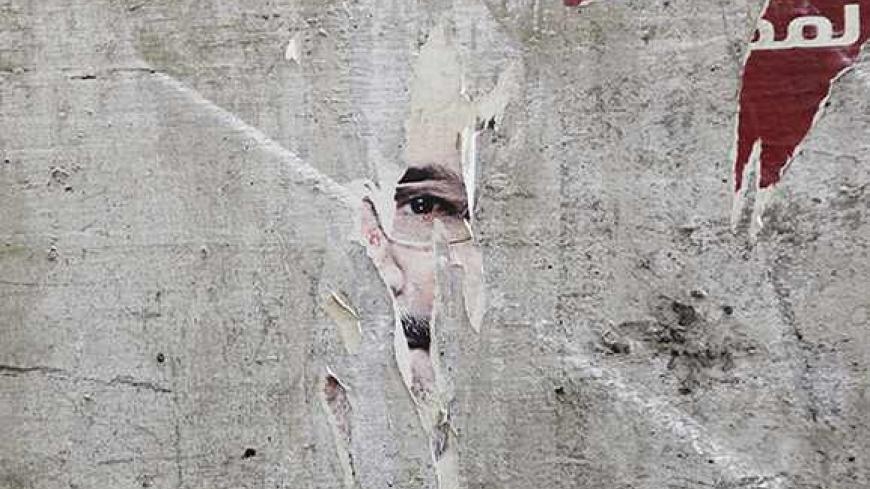 Remnants of a poster of ousted Egyptian President Mohammed Morsi are pictured on a wall on a street in Cairo, Aug. 25, 2013. - REUTERS/Muhammad Hamed

CAIRO — Several months ago, sometime after the volcanic period that began in November, which witnessed Mohammed Morsi declaring himself Egypt's omnipotent ruler, the referendum on the constitution, the beginning of mounting violence and anger, fierce political confrontation, and a raging fire of societal division that ensued, I remember seeing a peculiar yet highly expected photoshopped image at the time. It was an image with Morsi’s face cropped over a famous photograph of Hosni Mubarak behind bars during his trial. The image looked quite real at first glance. After being taken aback for a millisecond, I then realized what was before me. The person who posted the photo declared: “2013 year won’t end before this man is behind bars.” He had no doubt whatsoever, and I obviously had all the doubt in the world. But it looks like, well, Egypt continues to be a country where the unlikely is more likely.

With the exception of a (well-timed) barely intelligible video a couple of days ago of the former president in detention, one that the Egyptian paper Al-Watan says it obtained through its own work rather than a leak, the trial footage was the first time the public had seen Morsi since July 3. It was all sanctioned footage, unlike the original live broadcast of the beginnings of the Mubarak trial. The man slowly exited the nondescript white van he was transported in, looked composed and smiling, took sometime adjusting his dark suit jacket and buttoning it up, and the guards around him gave him time. In the courthouse, Morsi, as expected, proclaimed himself still the legitimate president, refused to acknowledge any legality to the trial and validity to the entire present political order. He eventually made the famous Rabaa sign to his supporters and the legal team, which seemed to reinvigorate his supporters. The other side chanted in anger, and reportedly some loudly called for the death penalty. The session ended as Morsi refused to wear the white jumpsuit that prisoners wear during trial and detention. Eventually, the trial was adjourned to January, suggesting that these might be quite the long proceedings like the Mubarak case, and Morsi was then moved to the prison where he now wears that white jumpsuit.

He's the former prisoner that became an utterly unexpected president and then became a stunningly unexpected prisoner again. All in less than three years. And he is the second Egyptian president — and, to an extent, regime — to undergo trial within the same period as well. Simply unbelievable.

With the exception of a protest outside the constitutional court, some scuffles elsewhere and some presence by his supporters in the trial area where they clashed with the media and opponents, Nov. 4 was nothing at all like the “revolution” some in the pro-Morsi camp hoped it would be. It was one of the relatively more low-key days in the last few months in Egypt, largely mirroring how broken the Brotherhood’s once fierce organizational machine is. But it also reflects the toll taken on the base as well, physically and psychologically. The other thing that might have been a nightmare for the authorities in Cairo would have been foreign pressure. But I struggled to find any mention of the trial in US Secretary of State John Kerry’s brief visit only a day or two before, while the discourse of the visit was one of Washington wanting to move on. In fact, the whole day locally just didn’t even feel as earth-shattering as the first session of the Mubarak trial, which says a lot. Maybe that was just my perception. The local mass media that’s still in print and on air, all in the anti-Morsi camp, had a field day analyzing the symbolism of the event and its proceedings. Quite a few media figures even made what appeared to as an unfounded and unseemly assertion that the former president seemed mentally unbalanced.

But the most remarkable thing for me personally was the overwhelming mental flash I experienced the moment I saw Morsi behind those bars. I began to realize the incredulous flood of what the country’s been through. The January revolution, the idea of unity across the ideological spectrum, the idealism and unlimited immediate ambitions, the revolutionary momentum, the groundbreaking Mubarak trial, the troubled rein of the first military council, the avalanche of consecutive elections and referenda, the national horrors of Maspero and Port Said and others, the first freely elected parliament — and the stunning domination of the Islamists — and its dissolution, the unexpected rise of Morsi to become the country’s first freely elected, civilian (as well as Islamist) president, his global presence, his destruction of the constitution-making process, the growing violence in the streets, the deepening enmity between the once more united revolutionary front, Morsi and the Brotherhood’s growing autocratic tendencies, Tamarod and June 30, Gen. Abdel Fattah al-Sisi's rise and Morsi's ouster, the death of hundreds in Rabaa and everything this entailed, the local violence, the media frenzy and shifts in discourse, the increasingly heavy handed state, the new constituent assembly and constitutional amendments, the growing uncertainty over the shape of the future of Egypt’s politics and economics, the crackdown and weakening of the Brotherhood, and now the trial. I still cannot digest half of it, and you can surely fill the spaces above with so much more, it would require a book just to list, let alone analyze.

There is much to be said for a legal probing into Morsi’s year in power, though this trial and the other charges aren’t predominantly about that. But setting aside here the debate over the rightfulness of the setting, proceedings and charges, which many have debated and will debate to death, there is one thing that this trial perhaps symbolizes the most.

Surely Mubarak had, and has, a base of supporters, and they saw the deposed president as largely innocent or at least deserving to be spared trial. But even many within this base acknowledged his long era and entourage — and even the man himself — to be deeply flawed, corrupt and not the ideal that Egypt should aspire to. There was the realization that now the entire spectrum was united against Mubarak and what he represented, determined to move forward with an excitement that seemed infectious at times. For many, the question of sparing him from a trial was predominantly a matter of age and dignity, an appreciation of his military past, and a perception by some that the good he brought perhaps even barely surpassed the bad.

But Morsi represented so much more for what appears to be a larger, more passionate base of supporters. He represented an ideology that bridged the divine with the worldly, a guarantee of security and inclusion after a troubled long era for Islamists, an experiment in reconciling religion with modern democracy, a vindication of a long-held vision, the idea that the Egypt they wanted was finally coming sooner or later, that they were now the stronger force rather than the underdog in the country and in the region. For many in his base, almost everything that Morsi was seen to have erred in was largely justified, perhaps even the only thing he could have done. And for the non-Islamists who previously supported Morsi, he represented a shot at change, at rolling back the darker chapters of Egypt’s past and iron-fisted security state in favor of the progressive mantras of the revolution, a shot at a society in which everyone from Islamist to secular could co-exist, a bet that the Brotherhood and other Islamists would further move towards the left under the influence of politics and compromise. Clearly, all of these visions are not exactly in their strongest position at the moment.

Morsi’s trial is the apex of the clash between the two (if not three) increasingly irreconciliable narratives of where Egypt was and is, what (and who) was and is wrong with it, and what it needs to do, and where it needs to go.

There is now a dangerous and profound rift in the country that will not likely be healed anytime soon, and it's manifested in almost every family, workplace, and in friendships. It will take so long, and so much, before Egypt could sufficiently recover, before everyone could feel again that they are part of a country that is sufficiently united in looking forward.

The man on trial had a chance to enter history as a force of national unity, for positive change and inspiration, even with everything that was against him. But he became, for almost everyone outside his most ardent base, anything but that.