Negotiators must treat Israeli settlements as barriers to peace

David Makovsky, the newest member of the US secretary of state's negotiating team, must realize that the settlement enterprise remains an "intentional, clear and winning" Israeli policy. 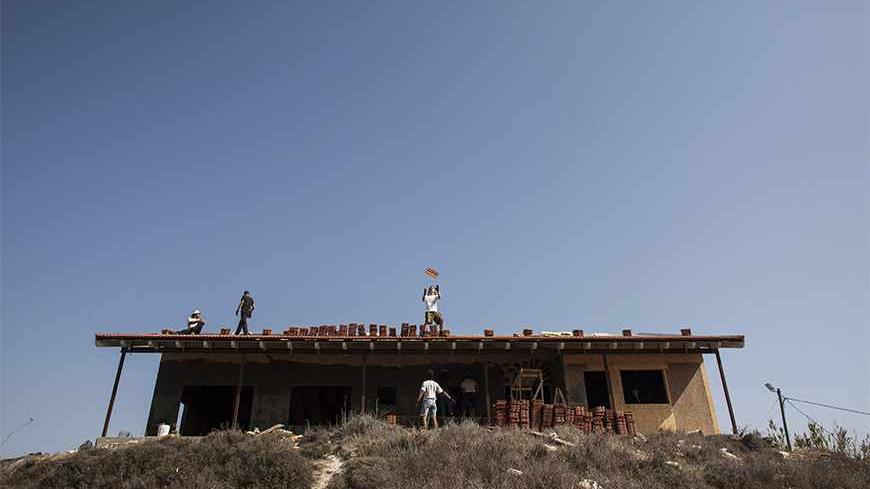 Men work on the roof of a house under construction in the unauthorized Jewish settler outpost of Havat Gilad, south of the West Bank city of Nablus, Nov. 5, 2013. - REUTERS/Nir Elias

David Makovsky recently joined Secretary of State John Kerry’s negotiating team. He had previously served as the director of the Project on the Middle East Peace Process at the Washington Institute for Near East Policy. In an article he published in The Wall Street Journal in 2009, Makovsky did not leave much room for doubt as to his position on the settlements: “It is foolish to believe that Israel can continue to build settlements for decades without considering the impact that has on the lives of the Palestinians,” wrote my former colleague from Haaretz (and in the interest of full disclosure, my tennis partner as well). He added, “The only way to deal with the settlement issue is to render it moot by widening it to peacemaking and heading straight into the final negotiations on territory.”

Four and a half years have passed since those words were written. In that time the negotiations on permanent borders have been renewed without significant progress in the “peace process.” The building boom in the settlements, on the other hand, has progressed impressively: From 2009 until the end of Prime Minister Benjamin Netanyahu’s second term, 6,867 new housing units have been started in the West Bank, more than a third of them on the eastern side of the separation barrier.

This week, on Nov. 25, it was announced that the Senior Planning Committee of the civil administration has authorized the construction of 800 new housing units. The plans include construction in two outposts: Givat Sal'it in the Jordan Valley, and Nofei Prat (near Jerusalem), an outpost evacuated by the state several times until it was finally decided to authorize it and turn it into a large and flourishing community.

The notion of paving a “settlement bypass route” by drawing permanent borders, as Makovsky has suggested, ignores the main goal of this enterprise — to entrench Israeli control over the territory while damaging the collective and individual rights of Palestinians. Thanks to the currently faltering negotiations, the West Bank has turned into the Wild West. While the statesmen “enter the room,” as Justice Minister Tzipi Livni likes to say, others are establishing facts on the ground in the backyard of Israeli society.

Fresh testimony, one of many, about this reality reached Al-Monitor this week courtesy of two activists from the human rights organization Ta’ayush that accompanied Palestinian farmers on Saturday, Nov. 23, into the South Hebron Hills. The event they describe below took place on Palestinian land, which the government of Israel has committed to before the Supreme Court to clear of crops planted by trespassing settlers:

When we got to the area of the hothouses, there were about ten settlers already there. They attacked the Palestinians, especially the children. When we came down with the camera, they attacked us as well and broke one of our two cameras. I called for help to a police officer who was there. He returned the camera to me completely crushed and didn’t arrest or stop even one of the settlers. When the settlers attacked one of the Palestinians or one of us, the soldiers did nothing, or they violently arrested the Palestinian. In effect, they cooperated with the settlers. Some of them passed among us and gave us little kicks.

The international community, through its various institutions, has protested settler violence against the Palestinian residents of the West Bank and has emphasized Israel’s responsibility to protect them. In response, Israel has promised to act on this issue and pointed to the establishment of a West Bank police district as evidence of its seriousness. This incident and others like it show that the police and soldiers stationed in the West Bank are not part of the solution, but an essential part of the problem. Eyewitnesses have told me that the officers of the civil administration, the military, the police and the border police who were on the scene acted as if their roles were not to restrain the Jewish marauders, but to contribute to pushing out the Palestinians.

Left-wing and human rights activists are not alone in criticizing the lawlessness of the Israeli state in regard to following the law and respecting its responsibilities toward the population under its control in the occupied territories. On Nov. 18, the Supreme Court, headed by Asher Grunis, gave its opinion on the laws the state has applied there and the decisions of the highest court in Israel regarding the territories. In a (partial) ruling on a petition submitted by Peace Now challenging the construction of houses in three outposts on private Palestinian land, the court wrote,

The time has come to order the state to stand by its commitments and carry them out. Given the long time that has passed since the petition was submitted and since the state committed to evacuate the structures, the importance of the public interest in the rule of law and the fulfillment of the commitments has increased. This is all the more true for those cases where the failure to carry out the policy has caused continued damage to the property rights of the protected residents.

The justices decried “the state’s ongoing foot dragging, lack of enforcement and illegality” with regard to its commitment to vacate buildings built on private property. “Not only are the buildings still standing,” the judges rebuked, “from the communications of the two sides it seems that in the years the court case has been proceeding, new buildings have been built, some of them on private property.”

The new member of Kerry’s negotiations team is convinced, as mentioned, that the settlement enterprise is “foolish” but can be overcome by drawing permanent borders between Israel and Palestine. In his opinion, the talks former Prime Minister Ehud Olmert and Palestinian President Mahmoud Abbas held in 2008 prove that the gap on this issue can be bridged. The two most senior ministers in the present government, however, are not so convinced. Foreign Minister Avigdor Liberman, whose return to office was accompanied by speculation that he might have moderated his views, said on Nov. 17, “The thesis that says one must make painful compromises and that the settlements are an obstacle [to peace] — this is a pure fabrication.” Three days earlier, Defense Minister Moshe Ya’alon, who is in charge of the occupied territories, proclaimed “the right of Jews to settle in all the territory of the Land of Israel.”

The crisis between Israel and the European Union over limits on funding research bodies connected to the settlements — which has delayed the signing of the scientific cooperation agreement within the framework of the Horizon 2020 plan — appears to indicate that in Europe, they are aware that the settlements are not simply an obstacle to peace. They have discovered that this enterprise is a barrel of gunpowder on the lip of a volcano.

The time has come for Makovsky and his colleagues on the American peace team to understand that the settlement policy is not “foolishness.” It is an intentional, clear and winning policy. If they continue to be satisfied with words of criticism and to mark time in another movement in the unending symphony called the “peace process,” the procession of violence will continue to pass before us, and the music of the settlers alone shall survive.