Beirut blast a lesson in terrorism

The perpetrators of the Iranian Embassy bombing in Beirut carefully crafted the attack to cause maximum physical and psychological damage. 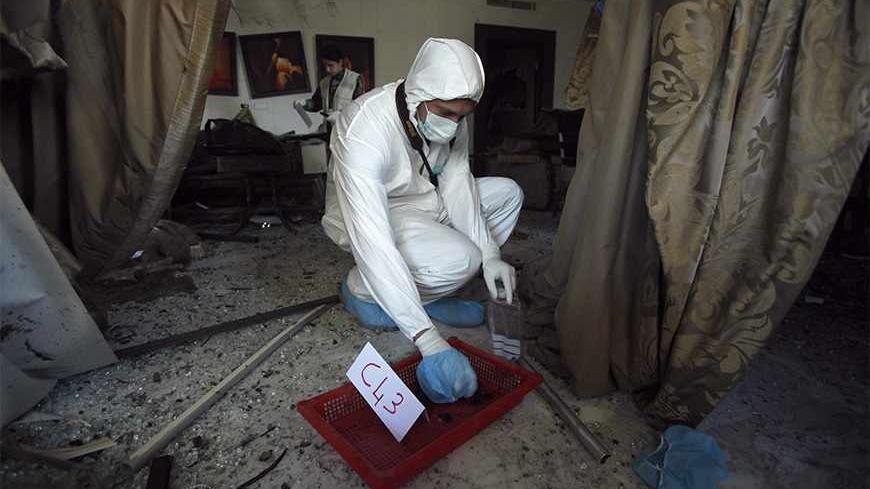 A forensic inspector collects evidence at the site of the two suicide bombings that occurred near Iran's embassy compound, Beirut, Nov. 20, 2013. - REUTERS/Sharif Karim

Researchers of criminal theory have often argued that the true objectives of terrorist attacks are not related to those who die, but to those who survive, including far from the target. This explains why their actions are called "TERRORism." The literal and conceptual senses of the word "terrorism" do not necessarily mean to kill. Rather the intent is to terrify — to frighten, intimidate and cause panic, in short, to terrorize. Thus, terrorism uses the bodies of the dead to strike at the minds and psyches of the living in trying to achieve its ultimate goal. In this sense, the bombing of the Iranian Embassy in Beirut on Nov. 19 provides a concise lesson in the principle of terrorism.

First, the operation was carried out by two suicide bombers, allowing those who planned the attack to enhance the scope of the horror by creating a large number of victims. An attack by suicide bombing tries to send a fear-filled message to everyone — to the victims of the operation itself and to the "real" targets: You cannot escape death and have little or no chance of deterring or preventing our attacks.

Suicide bombings cause more terror compared to various other forms of attack, for example, a localized bomb, a shooting targeting a person or a remotely detonated explosion. This was the case in Beirut. The message that day to the survivors was, "When we decide to strike, there is nothing you can do to stop us. When we decide to kill you, you will die. This is something you must live with every day of your life."

Second, the operation was carried out directly against Iran's embassy. In the ongoing political and sectarian conflict being waged in Lebanon and the broader region, Tehran constitutes a major player in terms of its political reach and Shiite affiliation. The enemies of the Iranian axis consider Tehran the de facto head of the politico-sectarian axis that stretches from Tehran to the southern suburbs of Beirut, passing  through Baghdad and Damascus. In this sense, in targeting the Iranian Embassy, the attack's organizers struck at the primary leaders and decision-makers of their enemy. This reflects another message of terrorism: "If we can strike at the top, we can certainly strike at every other level — including yours." Each and every person, officials and rank and file, is supposed to remember this. Every moment of their life is vulnerable to an act of terror.

It is also worth noting that the bombing occurred just moments before the Iranian ambassador and the cultural attache planned to leave the embassy to attend a meeting. The ambassador, however, was running late, so the cultural attache waited for him in a car. The attache died in the attack. The logistics of this situation raise a number of questions: Had the attackers been informed of the ambassador’s schedule? Had they planned to target the embassy as well as the ambassador? The message here is that those responsible were likely able to infiltrate the security apparatus of the Iranian government to gather confidential and detailed information.

Third, the bombers stayed at an upscale tourist hotel in the heart of Beirut, in an area known for popular cafes and hotels. The choice of the Sheraton Four Points might not be a detail without meaning. The organization that prepared this coordinated attack could have used a safe house in a nonconspicuous neighborhood or a hideout in a distant suburb. Lodging the bombers in a hotel in an affluent tourist district served to also terrorize current and potential tourists and visitors as well as residents in the Lebanese capital. An article written by a journalist who happened to be staying at the Sheraton conveys the essence of this element of terrorism.

Fourth, the bombers carried ID cards on their mission, thus allowing authorites to quickly determine who they were. This was not a coincidence or a lapse in the plan. Rather, it was a deliberate act designed to deliver another message. The Lebanese quickly discovered that one bomber was a Lebanese citizen, from Sidon, whose father is a Sunni and whose mother is a Shiite. The other bomber was a Palestinian residing in south Lebanon. Together, they conveyed the message, "We didn't bring in suicide bombers from Iraq, Libya or any other place where they can be easily recruited. We have attackers in Lebanon."

There is additional relevance in the bombers' identities. Having one Lebanese bomber from a Sunni region that stands as the primary divide between the Shiite south and Shiite south Beirut and the other bomber from a densely populated and unstable Sunni Palestinian area, the attack could ignite the south and the rest of Lebanon given the precarious security situation and tensions between Sunnis and Shiites and between Shiites and Palestinians. This is the crowning point of the organizers' message.

There is a saying that some lessons are written in blood. This is embodied, par excellence, in the lesson on terrorism experienced in Beirut a few days ago.