Turkish Prime Minister Recep Tayyip Erdogan’s harsh manner may lead his party to consider President Abdullah Gul to run for re-election rather than back Erdogan for president in 2014. 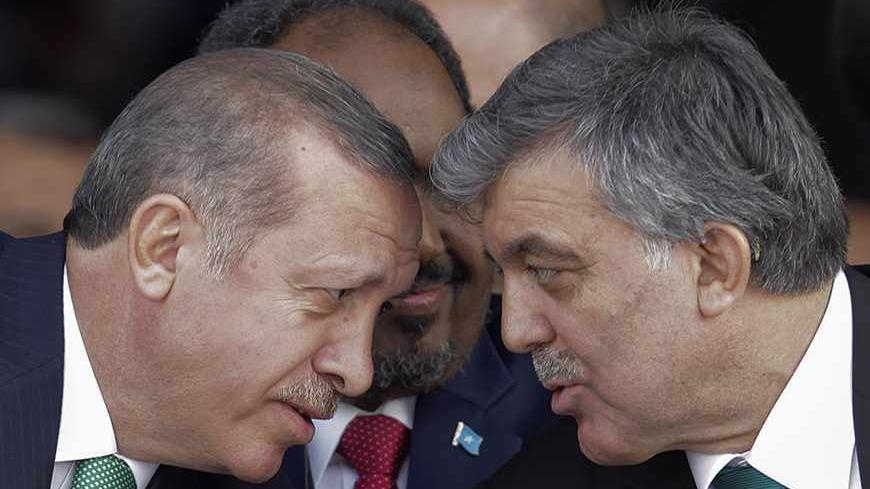 Turkey's President Abdullah Gul (R) and Prime Minister Recep Tayyip Erdogan (L) chat as President of Somalia Hassan Sheikh Mohamud sits between them during the opening ceremony of Marmaray, a subway linking Europe with Asia some 60 meters [197 feet] below the Bosphorus Strait, in Istanbul, Oct. 29, 2013. - REUTERS

Prime Minister Recep Tayyip Erdogan’s harsh demeanor, abrasive manner and increasingly authoritarian tendencies continue to keep him in the negative limelight. It seems he has started to grate on nerves even within his Justice and Development Party (AKP). There is evidence that not everyone in the party is happy with the way he is conducting himself.

Political observers have started wondering if Erdogan is unwittingly pushing President Abdullah Gul, a co-founder of the AKP whose term as president ends next year, into the foreground politically as an alternative leader capable of dousing the social tensions he has caused.

Turkey faces local and presidential elections next year, and general elections in 2015. Gul has intimated that he plans to remain politically active, although it is still not clear in what capacity. Erdogan, for his part, is expected to run for president since the AKP charter does not allow him to become prime minister again.

There is also visible discomfort in the AKP over Erdogan’s apparent disregard for senior members of the party. Deputy Prime Minister Bulent Arinc, a veteran Islamist politician and another co-founder of the AKP, is the latest to acknowledge this. He came out on the state-owned TRT channel on Nov. 8, during an official visit to Belgrade, blasting at Erdogan with no holds barred.

Arinc is angry at having been embarrassed by Erdogan over the currently raging social debate on young male and female university students living together. Erdogan was quoted by Zaman on Nov. 4 as telling his deputies during a closed-session party retreat near Ankara that they would take steps to prevent this.

Erdogan’s reported remarks provided instant proof for those who say he is pushing an Islamic moral agenda and disregarding the rights of the secular portion of society. Arinc, who is also the spokesman for the government, was of course aware of how Erdogan’s remarks would be picked up by the opposition, and denied the Zaman report.

Totally disregarding Arinc’s denial, however,  Erdogan came out confirming his words emphatically, and saying it was the AKP's duty toward parents, as a conservative party, to take precautions on young male and female students living together. Arinc was left looking the fool, and it appears feeling it, too. Referring to his long political career during his TRT interview, and pointing out that he is not just anyone to be sidelined in this way, Arinc demanded an explanation for the situation he had been placed in. He also intimated that he expected an apology.

This was not the first time that he had been left in the lurch by Erdogan. With Gul, he tried his best to calm the environment when the Gezi Park protests broke out at the end of May by employing a moderate and understanding tone, and succeeded to a degree. At the time, Arinc was sitting in for Erdogan, who was visiting Morocco. All attention then turned to Erdogan, with everyone wondering what he would say to the protesters upon returning to Turkey. Rather than taking advantage of the atmosphere created by Gul and Arinc, Erdogan lashed out at protesters as soon as he arrived at the airport, and thus increased tensions instantly.

Erdogan’s indirect response to Arinc’s angry remarks came on Nov. 12 in an address to his parliamentary group in Ankara, during which Arinc’s absence was noted. Far from trying to appease Arinc, Erdogan said grievances such as these should be solved within the party, and went on to utter a warning: “I believe all my friends will act responsibly and refrain from pleasing the enemy,” he said.

It is not just Erdogan’s treatment of Arinc, however, that is angering some AKP members. His position on the housing arrangements of university students, for example, is also being criticized by party members. AKP deputy Idris Bal, whose views on various issues are often quoted by the media, went on Twitter to say that anything which is not proscribed by law is not a crime. He was basically reminding Erdogan that there is no law in Turkey which says that male and female university students cannot live together.

“This matter can also turn into an instrument of propaganda at home and abroad against the party and the prime minister,” Bal said, clearly anticipating what was to come.

Fatma Bostan Unsal, a female academic and a headscarf-wearing founding member of the AKP, for her part characterized Erdogan’s view on the topic as “very dangerous.” Unsal, who was speaking during a meeting at the Dutch Consulate in Istanbul, said that raiding students' houses would be just as bad as the past raids on houses where religious students congregated to talk and pray.

Ertugrul Yalcinbayir, another founding member of the AKP and a former deputy prime minister, also jumped into the fray and declared Erdogan’s remarks to be “oppressive.”  He said they had not established the AKP as a “conservative democratic party,” as Erdogan was suggesting, adding that only “democracy” was mentioned in the party’s charter and program.

Meanwhile, Nazli Ilicak, a veteran female journalist and a former deputy from the now-defunct Islamist Virtue Party, came out on CNN Turk after Erdogan’s remarks, expressing “shame” for having supported Erdogan in the past, and indicating that such remarks can only damage his international reputation more.

The question now is how far Erdogan can go in increasing social tensions in this way while the country heads for presidential elections next year and general elections the year after. According to the AKP charter, Erdogan cannot run for prime minister again and is expected to become a candidate for president.

Gul, however, has not let on yet whether he will run again for president. It is generally assumed, however, that he plans to continue his political career. If he does not become president again, he will most likely be prime minister. But it is not certain that he is ready to play Medvedev to Erdogan’s Putin.

Unlike Erdogan, a majoritarian who relies on the ballot box to force his views on others, Gul has proven himself to be a genuine pluralist. In all his speeches he has underscored the importance of pluralistic democracy and Turkey’s European orientation. In the face of crises such as the Gezi protests, he has been a unifying, not a divisive figure.

Erdogan was once quoted as declaring that democracy is a train carrying him to his destination, a remark that has haunted him since. A recent quotation from Gul in a newly published book by the respected economist and columnist Osman Ulagay, Turkey Will Not Be the Same, published by Dogan Kitap, appears to show the difference between the two men.

While the Gezi protests were going on, during a meeting with representatives of foreign companies in Turkey, Gul indicated that Turkey’s democratic vocation is clear, saying that the necessary rails have been laid for it. He added, however, “If there is a problem with the locomotive, that locomotive can be changed.”

With a divisive Erdogan on one hand, and a moderate Gul who can reach out to all without discrimination on the other, the choice between the two men may prove not to be a difficult one when the chips are down, especially for party supporters who would be happy enough with a devout Muslim who is a co-founder of the AKP, and who at the same time has the capacity to ease social tensions rather than cause them.

Time will tell if this is wishful thinking on the part of Erdogan’s opponents, or foresight. What is clear today is that Erdogan is proving to be his own worst enemy.