While the European Parliament report on Turkey gives the government low marks on media freedom, the media industry may be mostly responsible for this outcome. 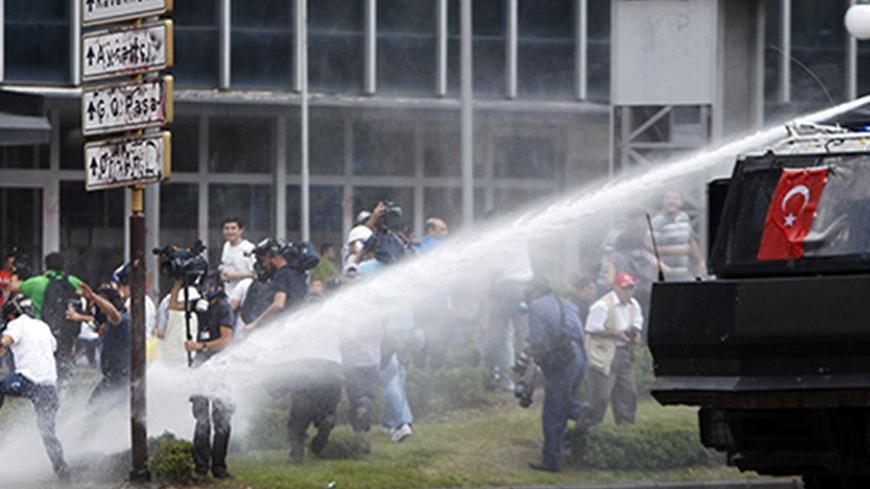 Members of the media are fired upon by a water cannon during protests at Kizilay square in central Ankara, June 16, 2013. - REUTERS/Dado Ruvic

The European Parliament's report on Turkey this year, adopted on Oct. 18, presents a mixed bag of progress and concern related to the country’s democratization efforts. It’s noteworthy that media freedom receives the least praise, which in a way reveals the state of democratic culture in the country.

“Key provisions of the Turkish legal framework and their interpretation by members of the judiciary continue to hamper freedom of expression, including freedom of the media,” the report states. “The ownership structure of the Turkish media, dominated by large industrial groups, combined with at times intimidating statements by high-level officials and warnings by the authorities, also makes self-censorship in the media widespread, as shown when mainstream media failed to report on the June protests. This environment has also led to dismissals and resignations of journalists.”

Well said — especially the flag raised concerning the media structure set up by the government. This creates loopholes for both sides to abuse their powers and each other, bringing about a relationship bound to create problems.

Truth be told, this is not a new thing. It is just that Turkish Prime Minister Recep Tayyip Erdogan’s government has figured out how to use this weakness to its interest. The media conceded their duty long ago as the fourth estate. The government decided to play hardball with the long-standing media patronage, confident in its strong showing at the ballot box since increasing its votes in three consecutive general elections, beginning in November 2002.

The report bluntly stated: “[The] state officials themselves continued to launch suits against critical journalists and writers. This, together with the high concentration of media ownership in the hands of industrial conglomerates with interests going far beyond the free circulation of information, continued to lead to widespread self-censorship by media owners and journalists. In particular, the mainstream media hardly reported on the Gezi Park protests in early June. Columnists and journalists were fired or forced to resign after criticizing the government. As a result, freedom of the media remained restricted in practice.”

If the report is lacking anything, however, it is the media’s responsibility of keeping up with the highest professional standards, and what it means to democracy when the media fail to do so. This is not intended to justify the government’s abuse of power or put down numerous valuable Turkish journalists.

This point may have two aspects. This is not the first time Turkish media freedom has been restricted. The current argument is not that the authorities are trying to intimidate the journalists, but that this government has gone too far. It is painful to admit, but the media in this country have by and large not played a constructive role, with many giving in when faced with hardship, thus preventing the achievement of the highest ideals within a democracy.

Today is not the first time some of us in the journalistic community have been sold out by our media owners, editors or peers. Turkish newsrooms have never been perfect in respecting and protecting those who have been different and have the guts to speak out of turn. And this is not about personal heroism, but those journalists who could really bring forth the facts that state authorities keep out of the public eye. When the media fail to do their job properly, the nation fails to rediscover its common sense because it lacks all the facts.

In the past, the media obeyed military orders and did not do its job when the army was fighting against Kurdish terrorism in the form of the Kurdistan Workers Party (PKK). Fighting terrorism is a dirty business, and nothing goes as planned. Today’s story of the Kurdish dilemma would be very different if the Kurdish citizens of this country were able to see and hear their media based in Istanbul empathizing with them, or if soldiers hadn't stained the good name of their uniform by taking illegal actions in the name of fight against the terror.

The media, however, chose to blame the government, military and deep state for everything that went wrong, when it was unable to fulfill its own duties to the people. That blame-game is ongoing, and the EU's progress report on Turkey reflects as much. Unfortunately, the report fails to point out that current media are ideologically divided and in conflict over the country's direction.

There is no doubt that journalists critical of the government have been forced to resign or had their contracts suspended. But it would be wrong to perceive the scenery as homogenous, wherein the government orders the media to hire or fire individuals. On the contrary, newsrooms make their choices and stay close to whomever is in power. Journalists at odds with such a newsroom environment are pushed away by their peers.

This ideological divide in newsrooms takes its toll on the freedom of the media and expression. It looks like this is an inevitable fact of our times. But this newsroom dilemma also reflects who we are as a society, and why we face a national identity crisis.

While it is wrong to expect people to have a homogenous perception on the rights and wrongs of this republic, the constant debate about the past, and the endless reactions of the highest state authorities, show that the country is still not at peace in its own skin. Whoever has the power aims to dictate that their way is the right way, and the only way to go forward, thus leaving no room for a national dialogue.

The importance of a free media plays a primary role in society, the absence of which encourages dangerous polarization, pushing people to take sides with political parties as if they were soccer teams. People are doomed to trust no one, as there is no professional media. While this poisonous cycle only works against the best interests of the people, the truth may lie in the media holding equal or more blame than state authorities for all the obstacles that journalists face to freedom of the media.