When Women Fall Silent in Sudan

A personal account from a silent protest by wealthy Sudanese women in Khartoum that seems to have worked. 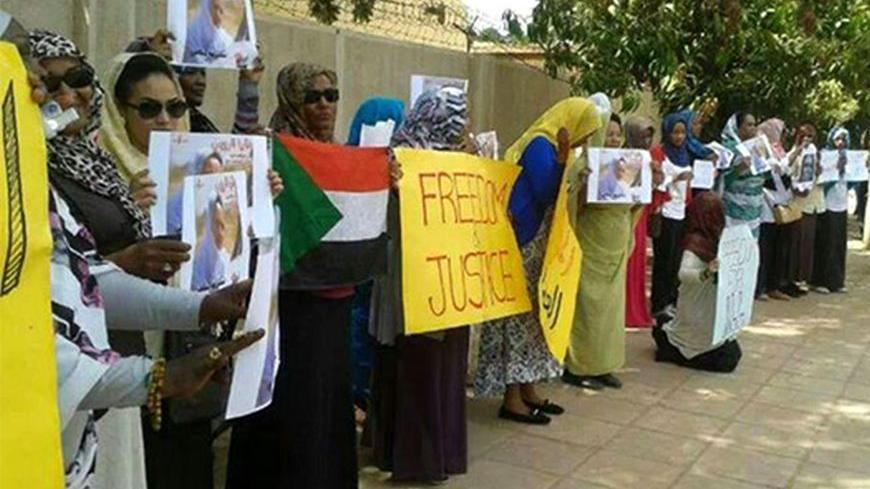 KHARTOUM — Thursday, Oct. 3, was a defining day in my life. It was the day a wall of silent women demanded the release of our fellow female prisoners — and won. They were released three days later. In recent weeks, my country has witnessed the largest protests against President Omar al-Bashir's regime since he seized power two dozen years ago.

That day started when I heard of the women’s demonstration at the home of Dahlia El Roubi, a mother and activist arrested at her home in an upscale Khartoum neighborhood on Sept. 30. Other women who shared her fate were Rayan Shakir Zein Abdeen and Amal Habbani, a mother and journalist.

The mental vision I get when I hear the word “protest” does not involve refreshments and photo shoots, so it dawned on me that this day was not going to be normal. The atmosphere was evocative of a tea party of friends, family and varying degrees of separation that never reach six in Sudan.

I was happy to find a banner with “Freedom & Justice” written on it, in English. These words are the reason I became involved in the issues of Sudan, they are my path and my destination. If I am arrested, I thought, let it be said that it was for calling for freedom and justice.

After taking pictures in a lovely garden, we were told to regroup at the infamous security compound (al-Qiyaada al-Aama) in the Airport District (Hayy al-Mataar). Upon reaching our destination, a woman next to us gave directions over the phone, “Yes, we’ve arrived,” she said into her headset, “next to the American Club.”

Luxury cars kept coming, women delicately stepping out of chauffeured vehicles, making their way to the assembly point. We formed a line facing the gate, silently raising our banners and flyers. Then, we stood. And stood. And stood.

The security guards manning the gate did not realize what was happening until they were faced by a wall of silent women. A main street separated us. Cars began to slow down and gawk. A coordinator explained to the guards that we were there to present a memorandum.

First, they slammed the gate. One security guard donning a bulletproof vest went in, came out and cocked his gun. He was a kid; we had grandmothers on our side. We were unimpressed. A flow of security personnel in uniform and plain clothes began. All the while, the heavy traffic of the adjacent al-Qiyaada Street turned sluggish when drivers came upon our wall of silence.

One woman was wearing Gucci sunglasses, we noted as other demonstrators greeted each other. Chilled bottled water was distributed.

Cars honked their horns in solidarity, occupants raised their fists in the Sudanese version of a thumbs-up. Passing women raised celebratory ululations and chanted slogans. We responded with fists and peace signs. We were on top of the world.

After about an hour of this silent face-off, 10 women crossed the street, carrying their memorandum. Among them was the wife of jailed activist Amjed Fareed. She held a sign that stated simply, “Let our father go.” (He has not been released to date, along with Mastoor Ahmed, Mohayad Siddig and countless others). Two entered and the rest returned to join us in our wall of silence.

The memorandum addressed to Mohammed Atta, head of the National Intelligence and Security Services (NISS), opened with passages of the Quran regarding justice, followed by appealing to his duty to uphold the constitutional right to freedom of speech, to treat people humanely and to advise families of the whereabouts of their loved ones. They called on him to press charges if any were in breach of the law and allow detainees access to legal counsel and give them free and fair trials. In closing, the women said, we will stand vigil until our demands are met.

Suddenly, a pickup full of young, plainclothes security men drew up beside us, wielding heavy black hoses, the local intimidation weapon of choice. They started shouting, talking to each other, not addressing any of the protesters.

One misguided fellow raised his hose in warning from the top of the pickup above the head of a lady who was clearly a grandmother, “Are you going to hit me?” she asked him calmly, looking him squarely in the eye, forcing him to lower his arm and turn away.

Guards ventured across the street toward us, emboldened by the increased numbers and rubber hoses.

As they took away our banners, the guy charged with this task looked at my English banner with some confusion, looked at me and said, “Please” as he tore it away from me. Color me impressed, multilingual thugs, I thought.

"The Constitution allows us to demonstrate peacefully," my brave companions told him.

"With a license, barked the ring leader," well-versed in his "constitutionese." "No assemblies, you submitted your memorandum," he said in exasperation. "Just leave."

"When our people leave your offices," was the reply, referring to the elderly ladies that had gone in but had not resurfaced.

As soon as the gate opened to release said applicants, they were showing us to our cars.

“They all came in private cars,” one security man whispered to another. Clap, clap, clap, clap. “Hurriya!” we shouted on the way to our parked cars. The popular Sudanese triple-clap, punctuated by “Freedom!” was a common protest chant that everyone could get behind.

Some women berated the young men, calling them tools of oppression against their own people. “You are as old as my mother, I cannot talk back to you,” one security officer replied, according to one woman.

Suddenly a young lady in a lab coat started screaming at the security men, "How did you get like this? What did they do to you? Aren't you one of us? How could you?" She was dragged away by fellow protesters. We were soon escorted to our cars, followed by security men taking pictures of us and our license plates, in a scene reminiscent of the first chapter of The Godfather.

The young children of journalist Amal Habbani passed by us with their father. I could only imagine what he was going through.

Security forces stopped traffic on the main road and allowed us to leave the scene without further incident. To my knowledge, no women were detained at this protest.

What did we accomplish with this silent protest of old women in chauffeured cars? A great deal.

The average age and social status of our protesters was a clear indication that the current issue of the people of Sudan is not about gas prices and aspirational rhetoric. This time, it’s personal: people against government. There have been 200 reported deaths in the demonstrations of the past few weeks and between 600 and 2,000 reported detainees. This is a popular movement that has reached every home.

Publicly, the greatest fear is that the protests will lose momentum as people struggle to earn their daily bread, or stay home, fearing for the lives and safety of their families. The disillusioned public fears that the blood of martyrs will be lost and that it will not be granted the justice it deserves. Members of the public fear that the government will win, and that we will be forced to swallow our pride as we rummage for sustenance in their trickle-down dumpsters.

Then there is the hope.

We have seen heartwarming demonstrations where neighborhoods and entire districts came together to call for freedom and to celebrate the lives that were lost.

We may never know if we played a part in the presidential pardon issued a couple of days after our stand. Participating in this silent vigil gave me a sense of unity and empowerment. This demonstration showed us the fear and confusion of a government when women fall silent.

Tagreed Abdin is an architect and mother of three, living in Khartoum, Sudan. She blogs at Taggy's Musings: A Sudanese Blog. On Twitter: @taggy_