The US decision to curtail Egypt's military aid, while unlikely to influence Cairo's growing divergence from US policy, could give Washington a chance to reset what the goals should be. 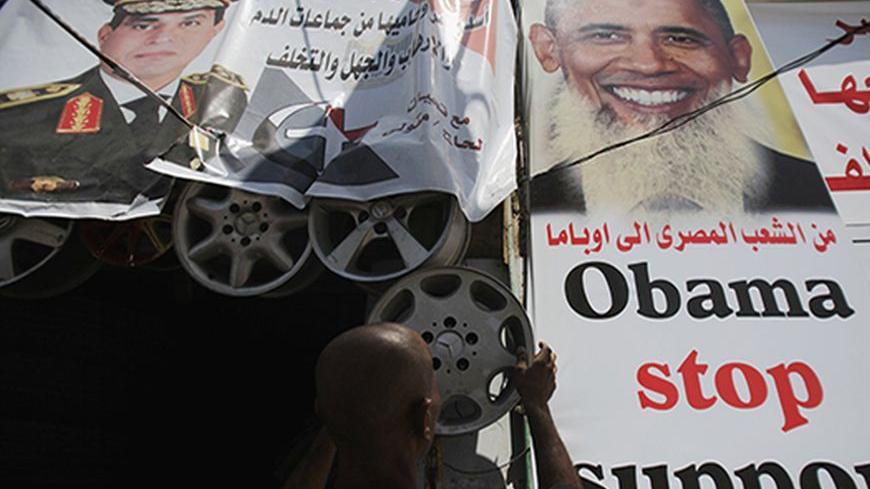 After a three month-long “strategic review,” the Obama administration has decided to “recalibrate” aid to Egypt and curtail support to its military — a move unlikely to even slightly alter the course of Egypt’s troubled transition. While the aid debate has preoccupied US policymakers and pundits, it is mostly meaningless for Egypt’s leaders, already convinced that Washington stands against the current government. Indeed, Egypt’s generals have conducted a strategic review of their own, and have already begun to cast away their partner of 35 years.

Projecting a deep disdain for Washington’s policies of the past few months, Egypt’s leaders are neither begging for US support nor waiting for Washington to dictate the future course of bilateral relations. Egypt has sued for divorce, and the US decision to curb military aid simply consummates the separation.

Regardless of policy decisions taken in Washington, the 35-year partnership between Washington and Cairo is quickly fraying. At this point, no US policy shift regarding economic or military assistance would be decisive in influencing the calculus of Egypt’s leaders. In Egypt’s starkly polarized political context — where the generals perceive their power and position at stake — the Egyptian military will continue its clampdown against domestic opposition in spite of Washington’s advice.

Since its July 3 takeover, the military-led government has systematically repressed the political opposition through arrests, legal action and brute force. The government’s attempt to permanently eradicate the Muslim Brotherhood from Egyptian political life is coupled with its aggressive campaign to silence and intimidate the independent press.

Mirroring its efforts to stifle internal dissent, the military has scorned international actors perceived as supporting the previous government. Friends of the Brotherhood are now adversaries — untrustworthy actors intent on undermining the military’s domestic position. Military authorities have punished Hamas, the sister organization of the Muslim Brotherhood, by restricting access across the Egypt-Gaza border and destroying hundreds of smuggling tunnels that serve as Hamas’ economic lifeline. The regime has also repudiated Qatar’s role in supporting the government of former President Mohammed Morsi, returning $2 billion worth of Qatari aid and forcibly closing the Cairo offices of Qatar-based Al Jazeera.

Increasingly, therefore, the military views international relations through the same polarizing lens with which it views internal politics. In this binary lens, the United States is considered more an adversary than a friend.

This view was dramatically conveyed by Egypt’s most powerful figure — Gen. Abdel Fattah al-Sisi — who accused the United States of turning its back on Egyptians and abandoning the “security, safety and well-being of Egypt.” Other leaders have diminished the importance of US aid to Egypt. When asked about the possible withdrawal of US support, Prime Minister Hazem el-Beblawi hinted at strategic realignment: “Let's not forget that Egypt went with the Russian military for support and we survived. So, there is no end to life. You can live with different circumstances.” More recently, Foreign Minister Nabil Fahmy asserted that Egypt’s decision-making “will not be affected by US decisions regarding aid,” and admitted that the bilateral relationship is in “turmoil.”

Perceiving the United States as acting against its interests, the Egyptian government has simply stopped listening to Washington. Despite his close relationship with Sisi, Defense Secretary Chuck Hagel failed to convince his Egyptian counterpart to refrain from liquidating protest camps of Morsi supporters in August. The subsequent diplomatic efforts of Sens. John McCain and Lindsay Graham were equally futile.

For Egypt’s current leaders, Washington is no longer a prime guarantor of security and stability. The US-Egyptian relationship remains intact through military channels, but Egypt will likely strive to diversify its alignments and seek closer relationships with those countries that share its strategic priorities — namely cracking down on the Brotherhood. Gravitation toward the Arab Gulf monarchies — particularly Saudi Arabia and the United Arab Emirates — is extremely probable. Since the July 3 military intervention, these states along with Kuwait have lavished Egypt’s new government with $12 billion in aid and have fully backed the military’s clampdown against the Muslim Brotherhood, a group the Gulf rulers similarly consider a political and security threat. For military hardware and weaponry, the Egyptian military may turn to Russia in the absence of US support.

Ultimately, this growing distance between Cairo and Washington could be constructive, providing the time and space necessary for a vital overhaul of the strategic partnership. The partnership, built on military and counterterrorism cooperation, has reinforced autocracy and undercut prospects for a politically and economically stable Egypt. After all, the recent upsurge in domestic militant activity is the direct result of state repression and the accompanying “anti-terror” campaign against the Brotherhood — perpetrated with arms and equipment supplied by the United States.

Rather than viewing relations through a security and counterterrorism lens, US policymakers should recalibrate relations based on an economic development framework. Given its dismal reputation among Egyptians, Washington needs to stop worrying about its influence with Egypt’s political leaders and start thinking about ways to support the socio-economic aspirations of the Egyptian people. The expansion of economic and trade relations and improvement of cultural and educational exchanges with Egypt would signal Washington’s interest in helping the Egyptian people — and would help pave the way toward political stability.

Joshua Haber is a research associate at the New America Foundation’s Middle East Task Force and assistant editor for the Middle East Channel at Foreignpolicy.com.