Israel's Right Wing Does Not Care About US Credibility 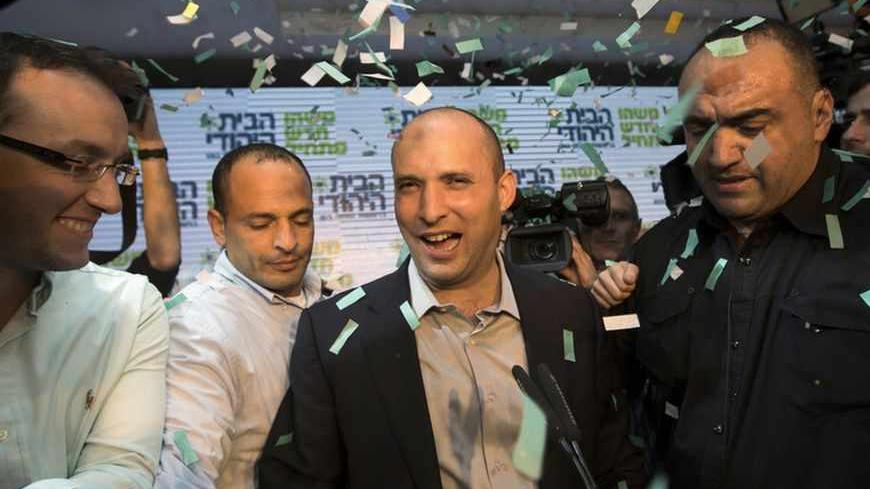 President Obama’s decision [Aug.31] to delay the assault on Syria and seek congressional approval exposed the human-moral face of the leaders of Israel’s right wing. It appears that even members of HaBayit HaYehudi Party lost some sleep in anticipation of the US punishment of Syrian President Bashar al-Assad for the massacre of his people. Suddenly, they care about Arabs killing Arabs. For the Syrian criminal to get his just deserts, our friends on the right are willing to stand in line for gas masks and to clean out their fallout shelters. Such kind, merciful souls (until someone suggests opening a small refugee camp for Syrians on the Golan Heights). After wiping away the tears they shed over their neighbors’ bitter fate and clicking their tongues over the helplessness of the entire world, they can then go on to historical analysis and strategic conclusions.

Take, for example, the message conveyed to the public by Minister of Economy and Trade Naftali Bennett, chairman of HaBayit HaYehudi, on his Facebook page the day after Obama’s speech. “Israel’s iron rule is that if we don’t look out for ourselves, who will?” the minister of economy wrote. “The international stuttering and hesitancy over Syria prove once again — Israel can trust no one but itself. From Munich 1938 until Damascus 2013, nothing has changed. That is our biggest lesson from the events in Syria.” Bennett stated that “every Israeli should know this, study it, share and distribute this to others.”

The impression that Obama is avoiding the military reaction to which he committed himself in his “red line” declaration — Assad’s use of chemical weapons — undermines the credibility of the international community and especially that of the great power, as I wrote in my previous article. The problem lies in the glee reflected in Bennett’s conclusion: that Israel cannot rely on the United States. It’s only a step away from there to a conclusion by Bennett and his friends that Israel is a nation unto its own, that doesn’t need to take into account the views of the gentiles, and can build as many settlements as it feels like, anywhere it wants. This kind of rejoicing is called “a beggars’ delight.”

Listening to those who bemoan the erosion of US credibility, I’m reminded of the boy who murdered his parents and wailed, “I’m an orphan.” For decades, Israel has been treating the world’s strongest power like a tail wagging a dog and portraying it over and over as an Israeli satellite state and a pawn of the Jewish lobby in the United States. To date, since 1967, the United States has protested numerous times against the policy of settlements in the occupied territories. The United States keeps protesting and Israel keeps building (the 110,000 settlers at the time the Oslo Accord was signed at the White House in September 1993 have turned into 350,000 settlers and 140 outposts as of September 2013).

The ungrateful, narrow-minded Israeli right wing doesn’t care an iota about US credibility. In the mid-1980s, the Yitzhak Shamir government made it a habit to greet then-Secretary of State James Baker on his visits to the region by launching a new settlement in front of the television cameras. Shamir went so far as to openly recruit the Jewish lobby in the United States, AIPAC, and the US Congress in an attempt to force President George H.W. Bush to sign US guarantees of $10 billion to fund the integration of Jewish immigrants to Israel from the former Soviet Union. Shamir insisted that Bush grant the funding while Israel continued to promote the settlement enterprise and to portray the US president to the whole world as a hollow vessel.

Bush was the last president to impose sanctions on Israel. He refused to provide the guarantees and in a September 1991 speech accused AIPAC, by name, of damaging US interests. In March 2010, in the days of the previous Netanyahu government, the ministry of interior greeted Vice President Joe Biden on a visit to Jerusalem with a decision to approve the construction of 1,600 housing units in the Ramat Shlomo neighborhood in east Jerusalem. World and Arab media once again exposed the nudity of the superpower.

In February 2011, Israel urged the Obama administration to use its veto weapon to defeat a UN Security Council resolution condemning Israel for its construction in the settlements in violation of international law. The United States was left alone among the other 14 Council members, including France, the UK and Germany. Hanan Ashrawi, a member of the PLO’s executive council, said at the time in interviews with international media that by using its veto power the United States had demonstrated its pro-Israel bias for the whole world to see.

The 1973 Yom Kippur War, the 40th anniversary of which is being marked these days, demonstrated clearly the extent to which Israel’s security, if not its very existence, depends on US diplomatic and military support. Israel, more than any other state in the world, has a stake in a strong United States with solid deterrence capabilities. Damage to US credibility is damage to Israel’s security. As the late Israeli Prime Minister Levi Eshkol said, “When the United States sneezes, Israel gets pneumonia.” One might have expected a responsible Israeli politician to withstand the temptation of turning the Syrian tragedy and American embarrassment into hollow propaganda slogans.