Amid the continuing street protests in the city, the 13th Istanbul Biennial’s decision to withdraw from public spaces aims to make the demonstrations and their message more visible. 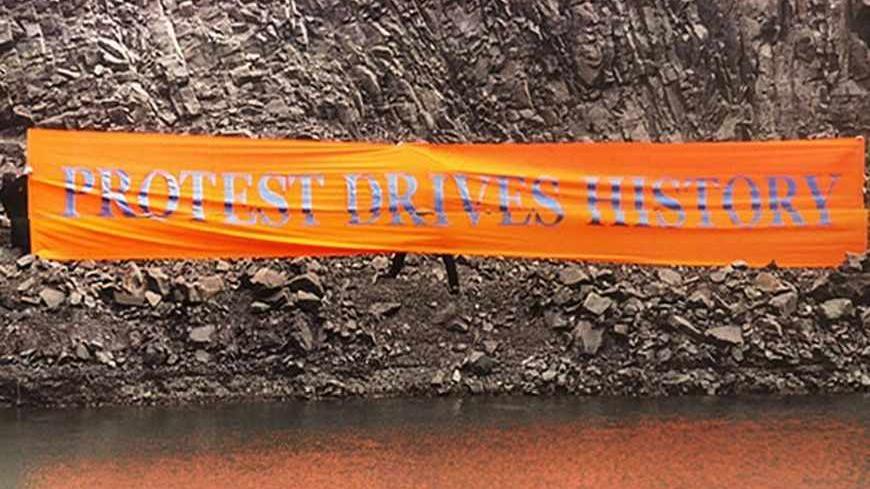 This 2008 photo, entitled "Protest Drives History" by Servet Dilber, is one of the pieces on display at the Istanbul Biennial that seem to echo the events in Gezi Park. - Freee Art Collective

On a crowded street in Cairo, a short-haired woman in her thirties tries to push her small frame through a sea of bulky men, all of them angry and trying to stop what she is doing.

“Do you call this art?” yells a balding man in a light blue suit. “They told you that making people walk like animals is art?”

The woman is not alone. She has a group of 15 other men following her. Young and old, dressed in poor outfits, they are down on their hands and knees, crawling their way through the crowds. This is a busy area of the city filled with hordes of people, but the men on all fours immediately stand out. Distinguished by a posture that suggests being abused, handicapped, submissive and rebellious all at once, they become "the other" — a hindrance not so much to the actual flow of traffic but to onlookers' comfort zone of accepted appearances that can veil all kinds of social malaise.

As bystanders and passers-by react in almost equal doses of anguish and anger, the woman stands her ground, saying, “I am an artist and this is an art performance,” adding, “It is important.” 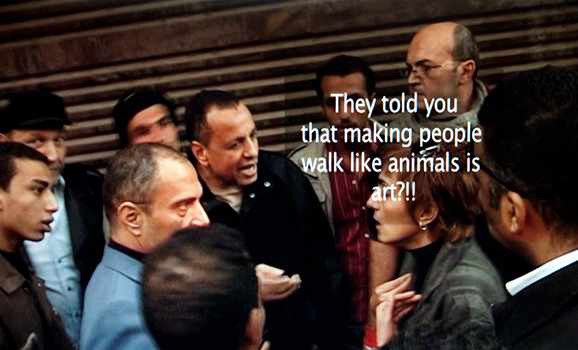 A Still from "Silence of the Sheep" (2009) by Amal Kenawy, courtesy of the Amal Kenawy estate

The men are not convinced. “You’re showing your country like this? Are you telling the world we are animals here? How can you do this to these men, lady?”

As their shouts dwindle to a murmur, I realize what is happening. Through a silent act that challenges the visible shape of human dignity, those performers are not only evoking a revolt of self-respect in their fellow Cairo citizens, but are also exposing the fragility of gender roles and national pride, while quietly restating the twin questions of what art is and what art does.

This entire experience is enabled by the footage of a performance staged in 2009 in Cairo by the late Egyptian artist Amal Kenawy, a creative genius who died in 2012 at the age of 38. The title of the video, which is now on display at the 13th Istanbul Biennial, is "Silence of the Sheep."

I step out. There, in the cool sunlight it has woken up to after having washed overnight in the first real downpour of the season, Istanbul resembles her better self — all fresh and spry this morning and not smelling of tear gas, for a change.

A small crowd of mostly foreigners gathers in front of the huge warehouse which serves as the main venue of the biennial. It is the opening day.

A giant green ball lifted by an industrial crane swings back and forth like a pendulum, hitting the building every hour on the hour. It is "bangbangbang," the work of Istanbul-born international artist Ayşe Erkmen, and it emphasizes, at least to me, the temporary nature of everything around us, as well as a sense of impending destruction.

On the wall just behind the pendulum hangs the posters bearing the theme of the biennial: “Mom, am I barbarian?”

A quote from Turkish poet Lale Müldür’s book of the same name, the question cannot be more loaded. Nor can it be more apt in a city where old neighborhoods are being continuously torn down so that gentrified ones can rise and the streets are taken almost nightly by the disgruntled youth and the police, who persistently douse them with water-cannons and tear gas.

Considered the most comprehensive international art exhibition organized in Turkey and the Middle East, the Istanbul Biennial this year looks at answers in the medium of contemporary art to questions such as, “What does it mean to be a good citizen today?" and "Does it imply conforming to the status quo or partaking in acts of civil disobedience?” 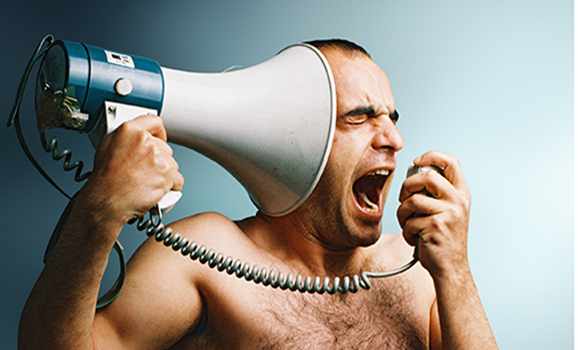 A photo from the series "Untitled (Megafon)" (2005), courtesy of the artist and Pilot Galeri, Istanbul

Inspired by Müldür and expanded in a conceptual text by the event’s curator Fulya Erdemci, these questions are tackled by the works of over a hundred contemporary artists from around the world who will be exhibiting in the five venues of the Istanbul Biennial until Oct. 20.

Before I leave the Karakoy neighborhood where the warehouse is for another biennial venue in Beyoglu, I walk next door to Istanbul Modern.

There in the art museum’s café, which is filled with an international crowd of creators, curators, critics and aficionados of contemporary art, I sit down with Erdemci and ask her, first, if she is happy to be back in Turkey after years of directing the prestigious SKOR (Foundation for Art and Public Domain) in Amsterdam.

“I was depressed at the beginning,” she says. “Until the Gezi events, I had the feeling that something was amiss here. But after Gezi, people are full of hope. There is a very unique type of civic awakening.” 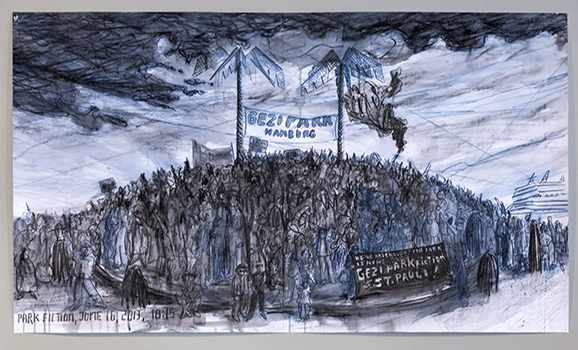 A piece by Christoph Schafër, 2013

For Erdemci, this is not only a political statement. Listening to her, I get the sense that the concept of the biennial, which was worked out long before the protests erupted in Istanbul at the end of May, had somehow anticipated what was to come.

Erdemci wanted to show at this biennial “how different, often contradictory, multiple worlds could come together, coexist and act together.” The Gezi protests jumped the queue in a way and “translated this utopian question into the field of experience on a local level.”

But the effect of the protests and the consequent police violence in Istanbul went beyond merely echoing the biennial’s theme. The events forced the art to go indoors.

Erdemci, however, does not agree with that characterization. “We did not have to go indoors,” she says. “It was a choice.”

Before the Gezi protests, Erdemci and her team had planned to have several art projects displayed and/or performed outdoors to directly interact in the urban public space.

“For me,” Erdemci says, “the raison d’etre of art in the public domain is to unfold the hidden conflict. Sometimes you add more to that conflict to make it visible.”

As her definition sends my mind back to Kenawy’s crawling men, Erdemci tells me that her decision to keep the biennial indoors aims to emphasize what is going on in the streets of Istanbul.

“Through the act of withdrawal," she says, "pointing out the presence by absence, we highlight the creative demonstrations already underway out there.”

Later, as I walk through the weekend crowd to the gallery Arter, another venue of the biennial, a whiff of the tear gas that has become a staple of the atmosphere near Taksim Square finally catches up with me. Inside Arter, among several other striking works, I watch "Excavators."

A poetic film by the Kirkuk-born artist Janane Al-Ani, it is an up-close video of ants laboring to dig a hole in the ground. As the little creatures carry out their loads with the utmost care and persistence, one particle at a time, change — in all its slowness and inevitability — becomes visible. And that, I believe, must say something about what art does.