As daily bombings and killings in Iraq have risked becoming regarded as mundane and normal, attention has shifted to the Iraqi government’s apparent lack of recognition of the human cost its country’s unstable security situation entails. 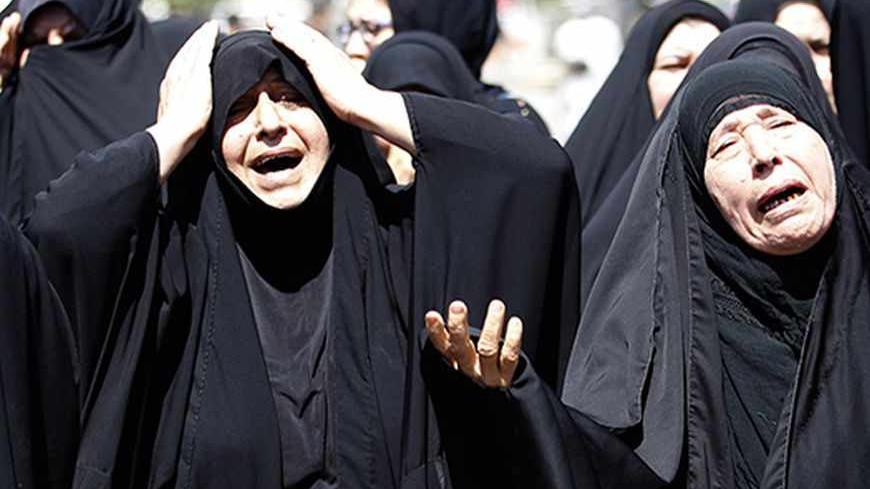 Shiite women react during a mass funeral for victims of a bomb attack on a Shiite mosque in Baghdad, Sept. 12, 2013. - REUTERS/Thaier Al-Sudani

Amid daily suicide bombings that have become part of the identity of their cities, Iraqis describe their lives. Ali Wajih, a young Iraqi poet, told Al-Monitor, “I’m no longer intimidated by death. Do not worry, I'm hallucinating. I talk about death, and laugh with my friends. Haven’t I told you that death has become trivial?”

Some Iraqi intellectuals blame media outlets for disregarding the human aspects of the victims of bombings and acts of violence, simply counting them on a daily basis and following up on the government’s reactions and stated measures. They usually represent repeated official discourse on the additional security measures, closure of roads and new arrests.

This picture has become a daily routine in Iraq. It does not only apply to the media outlets, which are no longer capable of following up on all the victims or reporting their repeated stories that are filled with sorrow and tears. It also applies to the people themselves. The way they deal with security incidents has gradually become part of the daily routine itself.

Iraqis go about their lives expecting a car bomb to explode next to them at any time. They say goodbye to their families in the morning, and deep down inside they do not rule out the idea that this could be their final goodbye. They continuously worry about their sons and daughters on their way to school or the market. In the midst of it all, a state of shock and surrender prevails.

The term “surrender” may be too harsh, though it is the reality. The authorities, responsible for preserving the security of its citizens, have failed to protect them following the US withdrawal from Iraq at the end of 2011. This alone may not be a reason for despair, unless these authorities fail to provide a convincing story about the reasons behind this security breakdown.

In recent months, Iraqis have experienced escalated and terrifying acts of violence and witnessed bombings targeting unarmed civilians in markets and homes and on the streets. The Iraqi security discourse had provided one explanation that was enough to cause additional frustration. The concerned security leaders have not hesitated to say that “targeting civilians is proof that terrorist forces have failed to reach vital targets.”

This discourse — which provoked public anger over the past few weeks and represented an occasion for a series of articles criticizing the government's security performance — reflects a collective shock at the ongoing security breakdown.

Good governance is not only achieved through economic and political transparency. For a country such as Iraq, it is important to tell one convincing story about the reasons and sources of all this violence.

Iraqi politicians have not ceased talking about “external conspiracies.” In Iraq, such accusations are implicitly or explicitly leveled against Iran, Saudi Arabia, Qatar and Turkey. The scope of the conspiracy has extended to include the United States, Britain and other countries.

Regardless of the sincerity of each Iraqi party in leveling such accusations against external parties, the internal failure in terms of security, politics, economy and services cannot be overlooked. This failure is enough to encourage the ambitions of any external party to interfere in Iraqi affairs and expand its power and influence inside Iraq.

Ten years after the change of the Iraqi political regime and two years after the US withdrawal — which was promoted as a victory during the elections — after all this wasted time, it is useless to talk about external conspiracies while silence prevails over the worsening internal failure.

Iraqis will not be able to overcome this state of shock at the bloodshed that has swept through their lives, without a real and transparent confrontation able to restore things to their right place. The first confrontation is about an inclusive review of how security is managed in this country, and of the mechanisms, plans and figures that counter this issue.

Today, Iraqi victims may seem to be merely figures reported by the media. These victims have a voice that has not yet been heard, probably because of the many security incidents. Their voices will, however, be heard sometime in the future, and they will be asking about all parties responsible for all the deaths, not only those who carried out the killings. They will also ask about those who neglected them and used them for political and electoral purposes, and certainly those who underestimated them and considered them to be mere numbers.