Iran and Turkey Have DifferencesOn Syria, But Not a Crisis

Iran's ambassador in Ankara, Alireza Bikdeli, says if the Iranian and Turkish differences on Syria were between two other countries, it would have led to serious problems. 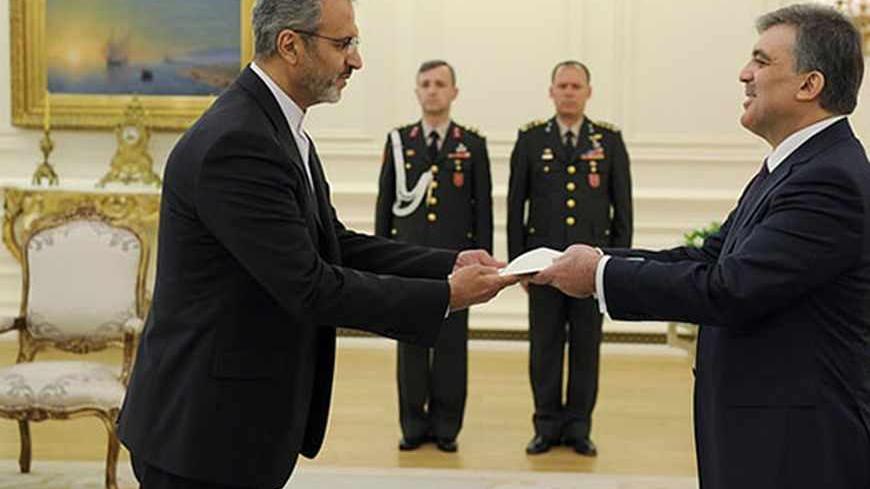 When I sat down for an interview with Iranian ambassador to Ankara Alireza Bikdeli on Friday, Sept. 27, it was a day after John Kerry and Javad Zarif had broken the six-year-long ice between the foreign ministers of both nations by talking face-to-face in New York on Thursday.

Meanwhile, Barack Obama and Hassan Rouhani had failed to meet expectations of a handshake to mark the end of a mute stalemate between the presidents of the United States and Iran since 1979. In a matter of hours, though, that was quickly changed by a telephone call from Obama to Rouhani, signaling a whole new beginning. I was filled with curiosity sitting before the ambassador, trying to grasp how he would describe this new Iranian opening and its potential impact on relations with Turkey.

After all, while there is sincere enthusiasm about this long awaited breakthrough — taking note that Rouhani is significantly different in style and rhetoric than his predecessor, Mahmoud Ahmadinejad, who in a provocative way sent a letter to then-President George W. Bush in May 2006 to open a direct line of communication with the White House. It might still be misguided to assume that Iran has changed its views on all things touched upon in Ahmadinejad's 18-page letter discussing religious values, history and international relations.

Still, Ahmadinejad had received the support of then-Sens. Joe Biden and Chuck Hagel — who are today respectively the vice president and secretary of defense — that the United States should indeed start direct dialogue with Tehran, just as they had talked to Moscow during the Cold War. It took about seven years to take that first step after the idea first emerged in the Washington beltway.

What really made this breakthrough possible, however, is open to debate. Explanations range from speculation on the dominance of al-Qaeda-affiliated groups in Syria and the stalemate on nuclear negotiations. Both of these issues constantly push the envelope in creating growing risks of a massive regional conflict while prodding the Western powers to watch out for the safety of the rich energy resources of the region and Israel. Whatever it is, Iran has opened the possibility of taking a seat at the table in Geneva to find an exit strategy from the mess in Syria.

“If the organizers [of Geneva II] aim to end the bloodshed, they will put no preconditions before anyone who should sit at the table. But if they bring a precondition, that means they would like to see the continuation of the situation,” Bikdeli told Al-Monitor. “One sets conditions to distance the parties from each other. The absence of conditions, however, allows room for parties to negotiate.” But the differences are not that easy to overcome — even between Tehran and Ankara.

“If our differences [on Syria] were to be between two other different countries, it would have the potential to cause a real problem,” Bikdeli told Al-Monitor. He stated that both countries are in full agreement in general terms to end the bloodshed and terrorism in the country, but they differ in their tactical approaches to the issue.

Choosing not to directly answer the core difference between Turkey and Iran when it comes to Syria, the ambassador said it all when he made the following remark: “For us or anyone else, it is simply against the UN charter to attempt to change the government [in Syria].” Put simply, the Recep Tayyip Erdogan government turned ending the Bashar al-Assad regime into state policy in September 2011. Since then, they have argued that whoever follows Assad would be better for Syria. Iran thinks the opposite, and takes the growing dominance of al-Qaeda affiliates in that theater as a security threat. Not that Iran is an innocent state when it comes to support of terrorism, like Hezbollah and Hamas, but it was an exceptional country that held a candlelight vigil after the United States was attacked by al-Qaeda on Sept. 11, 2001.

The Erdogan government has long departed from Turkey’s traditional approach to groups like Hamas and Hezbollah and doesn’t consider them as “terrorist” organizations. In fact, Turkey and Iran both unite in their harsh criticism of Israel. Maybe Ankara still is not as hard-line as Tehran, but when one looks at the sour state of almost non-existing relations between Ankara and Tel Aviv, why put it to a contest? Erdogan is more in alignment with Iran on this issue.

Turkey should also be worried about the growing dominance of radical jihadist groups in Syria, but the Ankara government seems to have turned a blind eye to these groups, believing that they are also fulfilling a job by fighting Assad and hopefully bringing about his end. “We warned for the past three years that if the situation goes on like this in Syria, as to how terrorism was going to evolve in the country, and we are now seeing the results of this situation,” Bikdeli said, arguing that the best way forward is to find a solution at the negotiating table.

“In the long run, we will be able to watch our best interests if Iran, Iraq, Syria and Turkey can grow closer and deepen their cooperation,” Bikdeli told Al-Monitor, also traveling back in time to 1514 when the Ottomans defeated the Safavid empire in the Chaldoran battle. From an Iranian perspective, the ambassador explained that Ottomans started to lose their strength after what seemed a victory at first sight, and he tied it to the Syrian situation. “We won’t be happy seeing Turkey get hurt in Syria. Turkey should also not feel happy when we get hurt in Syria, because if one gets hurt the other will inevitably get hurt, too. We are two countries where our destinies are tied together.”

He added: “If we or you were to be missing in finding solutions to the problems in our region, there can be no real resolution to these issues. If we don’t exist in Syria and you do, you can’t accomplish to find a solution to that conflict addressing the regional dynamics. It’s also the same the other way around. Turkey should not be kept outside the efforts in finding a solution to the Syrian issue. If we can’t find a solution [amongst ourselves] others from afar will have to come to manage the crisis. We all need to take these issues seriously.”

In fact, Bikdeli was echoing the same mentality that Turkish Foreign Minister Ahmet Davutoglu once argued. Addressing the need to find a solution to the Syrian crisis in December 2011, Davutoglu said, “We prioritize all the efforts in finding solutions to regional issues amongst the countries of this region,” and that he had built his policy of having “zero problems with neighbors” in that framework.

But Turkey has moved far away from that approach and confined itself to a difficult corner, struggling to shape the developments at its borders while accomplishing nothing concrete except spending nearly $2 billion for the Syrian refugees and supporting the opposition by any means, even when the death toll in Syria surpassed 120,000 people.

While Turkey also had a good standing with Tehran back then, Iran did not give it a chance to play a mediation role in March 2009 to help to improve relations with the United States. After former Turkish Foreign Minister Ali Babacan expressed an interest in playing such a role, Ahmadinejad said bluntly, “There is no need for mediation. Our stances are clear: If there is justice and respect, no issue would remain in the world.”

Although it is unknown what this US-Iran breakthrough really means and how it will affect relations with Turkey, Bikdeli sounded quite optimistic about seeing the end of the conflict on their nuclear program. To him, Erdogan had extended “a rational and a logical support” to Iran when the Turkish prime minister argued in August that he “had stood against the world” in defense of their nuclear program.

“We accomplished to convince the Erdogan government that Iran will exercise its rights within the framework of NPT, [the Nuclear Non-Proliferation Treaty]. We convinced them that we will abide by our responsibilities under the NPT. Our Turkish friends have seen first hand along with Brazilians the background of our nuclear program. And they understood that there are those who do not want this program to go ahead despite that it is all in accordance with the NPT regulations,” Bikdeli said.

“When people stop blaming Iran based on certain mindsets, all will understand our approach to this project. And this will be the resolution of Iranian nuclear issue.” In May 2010, Iran signed an agreement to send uranium abroad for enrichment after mediation talks in Tehran with Turkish and Brazilian leaders, but it did not go anywhere because the White House did not consider it an acceptable agreement.

When I pressed the ambassador, based on Rouhani’s speech which called on Israel to sign the NPT, whether they are turning this into a precondition — that without the Jewish state signing the NPT or giving up on its undeclared nuclear weapons arsenal that they would not be able to seriously convince the P5+1 countries, he chose not to single out Israel in his answer.

Despite this etched distrust of Iran’s nuclear program, Bikdeli chose to present a forward-looking approach, tearing down the long-imposed sanctions on Iran, and said: “Iran is a country exporting oil and natural gas. And Iran is considering all possible routes opening to international markets. ... We believe the best route heading to Europe is to go through Turkey. There are some serious negotiations about that.” Indeed, Bikdeli was referring to the Iran-Turkey-Europe natural gas pipeline project, which aims to bring Turkmenistan and Iran natural gas to European markets.

Although Turkey abides by all sanctions imposed on Iran, this new environment and the potential normalization of US-Iran ties will help to bring Iranian energy resources to international markets, and that is the big catch, which would mark the biggest turnover in the whole landscape of the energy sector. Yet the path ahead is not an easy one …