Ayatollah Sistani and The Battle of Najaf

A book by an aide to Ayatollah Ali al-Sistani reveals new details about the 2004 Battle of Najaf. 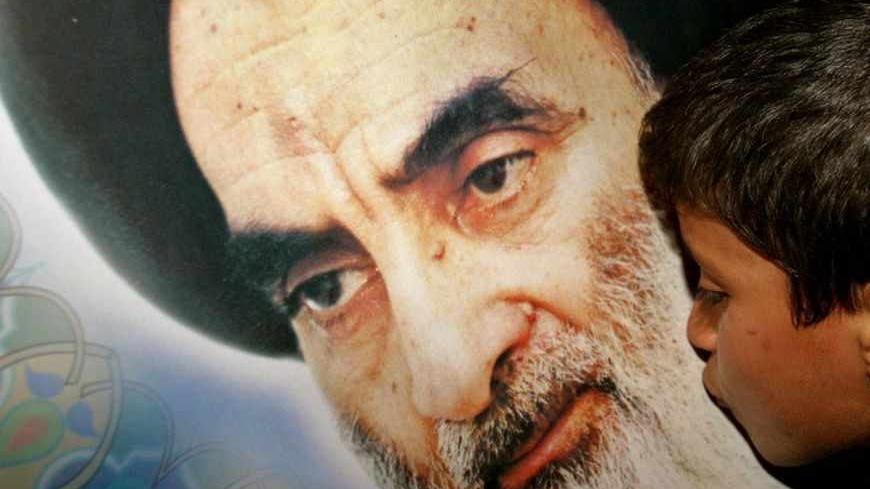 A memoir published in 2012 by a representative of Ayatollah Ali al-Sistani sheds new light on the Battle of Najaf that unfolded in August 2004 in southern Iraq. Hamid al-Khafaf, Sistani’s Beirut representative, takes readers behind the scenes in a fascinating account of a crucial period in Iraq’s contemporary history in Al-Rihla al-‘Ilajiya li Samahat al-Sayyid al-Sistani wa Azmat al-Najaf ‘Aam 2004 (The Medical Journey of His Eminence Sayyid al-Sistani and the Crisis of Najaf in 2004).

Many parts of the book read like a fast-paced movie script, with intimate details of back-channel talks and frantic last-minute deals in an effort to avoid a catastrophe. US-backed Iraqi forces were itching to storm the holy shrine in Najaf to route the Mahdi Army forces fortified inside. Sistani, however, stood in the way.

The ayatollah did not want to see further violence in Najaf or have the shrine desecrated on his watch. Instead of a military solution, Sistani and his aides pushed for UN mediation, and when that failed, they personally intervened by negotiating a cease-fire with the Mahdi Army founder, Moqtada al-Sadr. In the end, thousands of Sistani followers poured into the shrine, providing cover for the militants, who walked out without their weapons, defeated but alive.

This was not the first time that Sistani had intervened to end a conflict in Najaf. In April 2004, another battle had raged between the Mahdi Army and US-Iraqi authorities. Khafaf reveals how Sistani’s office drafted a four-point cease-fire agreement in Sadr's name and addressed it to the "Shia House," an informal group of Shiite figures and political parties. Sistani’s son, Sayyid Mohammed Ridha, presented the letter to Sheikh Mohammed Mehdi Asifi, the representative of Iran’s supreme leader, Ayatollah Ali Khamenei, in Iraq.

It was well-known that Iran was providing Sadr with political, financial and military support. Sistani’s son gave the letter to Asifi so he, in turn, could hand it to Sadr to sign. In early August 2004, the terms of that cease-fire agreement were broken, leading to much fiercer fighting. Given that the holy shrine of Najaf was in danger, the stakes were much higher as well.

Prior to the clashes, a medical team had assembled in Najaf and diagnosed Sistani with heart problems. They determined that he needed urgent treatment that was not available in Iraq. Before he could leave for London for treatment, however, fighting broke out between the Mahdi Army and US-Iraqi security forces and quickly spread throughout the city.

Sistani would travel to London via a short layover in Beirut, but the Najaf-Baghdad journey was fraught with danger. Besides the clashes in Najaf, neighborhoods just to the south of Baghdad and areas around the airport, to the west of Baghdad, were militant hotspots. Iraq’s national security adviser, Mowaffak al-Rubaie, suggested that Sistani travel to the Baghdad airport in a US helicopter, repainted with Iraqi insignia, but this idea was rejected. Instead, Sistani made the perilous journey on his own, in a three-car convoy.

In Lebanon, no one except parliament Speaker Nabih Berri was informed of Sistani’s brief transit due to fears that word would spread and militants in Iraq might realize he would be traveling from Baghdad airport. As one of the most high-profile leaders of Shiite Muslims, Sistani would have been a prime target for al-Qaeda-affiliated Abu Musab al-Zarqawi and other Salafist or Baathist insurgents in Iraq.

As Sistani underwent surgery in London, the fighting in Najaf worsened with each passing day. Initial efforts to convince Sadr to agree to a UN-mediated cease-fire through Hezbollah officials in Beirut failed. Sistani’s aides in London were in contact with Iraqi, Lebanese and Iranian officials to find a way to end the conflict. Khamenei even sent a message directly to Sistani, warning of a coming massacre in Najaf. Khamenei said Iran had not intervened or taken a position out of respect for Sistani, because Iranian officials did not want to take a public position that might contradict him.

Sistani immediately replied that the Iraqi government, led by Prime Minister Ayad Allawi, would not continue military operations once Sadr agreed to the terms of a peace initiative. In this, Sistani was effectively throwing the ball back in Sadr’s, and even Iran’s, court.

While in the hospital, Sistani received a steady stream of urgent memos and calls pleading with him to issue a statement. Shiites across the Middle East began criticizing Sistani for his silence on the chaos unfolding in Najaf. Khafaf argues that the reason Sistani did not issue a statement is that he did not believe there to be any practical benefit to doing so. Unlike politicians who issue hundreds of statements in support or condemnation of this or that, Sistani tended to make few, but powerful interventions when he believed he could make a real difference on the ground.

After recuperating in London, Sistani decided to travel back to Najaf against the advice of Iraqi officials, who wanted an all-out final assault against Sadr. This time he would transit via Kuwait and drive to Najaf from Basra at the head of a large convoy to force a brief cease-fire. Neither the Americans nor Iraqis wanted to risk putting Sistani's life in danger.

Sadr then visited Sistani, and during their tense meeting, an agreement was finally hashed out. The Mahdi Army would abandon its weapons and leave the holy shrine. Its militants from outside Najaf would return to their hometowns. In response, US forces would withdraw, and Iraqi security forces would forgo pursuing the militants.

Sadr did not want to bear the humiliation of having his militiamen walk out of the shrine alone, so he suggested allowing those amassed outside Najaf to enter and provide them with cover. During the meeting with Sistani, Sadr denied reports that non-Iraqi Arab jihadists were fighting alongside the Mahdi Army, but he did admit that  three Iranians had been fighting among his men, including a female suicide bomber.

In a final twist to the story, the signed agreement did not reach the Mahdi Army in time. The agreement was that the militants were to vacate the shrine by 10 a.m. Sistani’s staff frantically began distributing copies of the agreement at 7:00 am, but Sadr's forces could not clear the shrine in just three hours. They, therefore, asked for an extension, which was granted, but when they asked for a second and a third extension, the Iraqi forces began to think they were being deceptive and buying time.

To further complicate matters, the Mahdi Army had received reports that two militants had been arrested — despite the agreement's assurance they would not be pursued — and some began returning to the shrine for fear they too would be targeted. The Mahdi Army members believed the Iraqi forces were planning to ambush them while they were unarmed and defenseless. Mutual distrust threatened to ignite the already volatile situation.

Khafaf was dispatched to the shrine to personally speak with Sheikh Ahmed al-Shaibany, a senior Sadrist official, and prevent the deal from going sour at the eleventh hour. Khafaf guaranteed their safe passage and personally transported Shaibany and 20 other fighters in his own cars. He recalls the nail-biting ride as they passed the US army checkpoint at the end of the street. If just one bullet had been fired, Najaf would burn again.

During the ride out, one of the Sadrist officials told Khafaf they had intercepted phone calls the night before between Iraqi officials and himself. This would suggest that the “rag-tag” Mahdi Army in 2004 had sophisticated communications equipment when the “sovereign” government of Iraq had difficulty communicating within its ranks.

Following the negotiated cease-fire, the Americans insisted on conducting a military sweep of Najaf, alongside Iraqi forces, to clear the city of militia remnants. This would have been contrary to the agreement. Khafaf, incensed at the idea, bluntly told an Iraqi army general. “Tell them [the Americans] … if the Mahdi Army were fighting them a few hours ago, now we would be fighting them”.

The Americans reconsidered and only Iraqi forces were sent in. The peace in Najaf has held ever since.

Hayder al-Khoei is an associate fellow of the Middle East and North Africa Programme at Chatham House, a London-based think tank on international affairs. He holds a masters degree in international studies and diplomacy from the School of Oriental and African Studies, University of London. On Twitter: @Hayder_alKhoei