Iraqi Foreign Minister Hoshyar Zebari says the Iranian leadership could have prevented Hassan Rouhani from becoming president if it wanted to continue hard-line policies toward the United States. 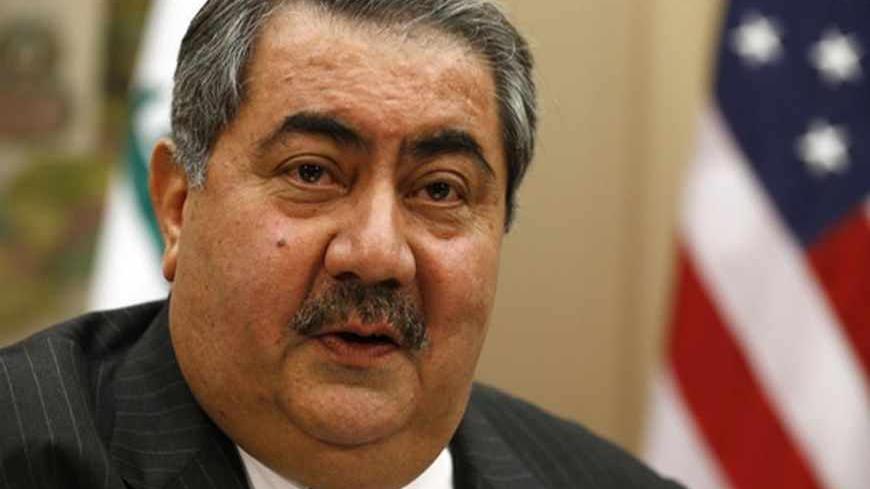 Iraqi Foreign Minister Hoshyar Zebari said on Aug. 16 that his country is ready to serve as a “bridge” between the United States and Iran, and believes that the Iranian leadership’s acquiescence to the recent election of Hassan Rouhani means that it is serious about resolving the nuclear dispute.

Zebari, in Washington for consultations that primarily focused on rising regional sectarianism, terrorism and the Syria conflict, said in response to a question from Al-Monitor that Rouhani, 64, a cleric partly educated in Scotland, is “a credible leader” who has “very strong relations with all the key leaders in Iran.”

Still, “there are many ways his election could have been scuttled,” had Supreme Leader Ayatollah Ali Khamenei and other power centers in Iran decided to do so, Zebari said. That Khamenei accepted the election of the least hard-line candidate allowed to run “was a statement by the Islamic Republic to the international community that it means serious business” on the nuclear issue, the veteran Iraqi official said. Zebari added that Rouhani’s win also reflected “enormous pressures” from the Iranian people who are eager to ease Iran’s diplomatic isolation and economic distress.

With the confirmation of most of Rouhani’s cabinet this week, including US-educated Foreign Minister Mohammad Javad Zarif, the Iranian government is expected to move swiftly to resume stalled multilateral talks on the nuclear dispute. Zebari predicted a new meeting of the P5+1 — the five permanent members of the UN Security Council plus Germany — in September, but said Iran might not arrive with a new proposal off the bat.

“I doubt it will happen that soon but pressures are mounting on them to seek a solution,” Zebari said, noting the impact of economic sanctions on the Iranian economy.

Zebari echoed comments made to Al-Monitor editor and CEO Andrew Parasiliti recently by Lukman Faily, Iraq’s newly appointed ambassador to the United States, that Iraq would be happy to facilitate a meeting between the United States and Iran. However, there was no indication that Washington has asked Baghdad to perform that function. US officials — and Zebari — declined comment on whether he was bringing any messages from Tehran.

Zebari, addressing the Center for Strategic and International Studies in Washington, also spoke about the rising violence throughout the region. More than 3,000 people have died in Iraq in recent months in car bombings and other acts of terrorism that Zebari blamed on Sunni militants. Still, he rejected assertions that Iraq — which is ruled by a Shiite majority government — is descending into the sort of sectarian warfare that tore the country apart from 2005 to 2007, when thousands of US troops were still there.

“There are extreme forces on both sides, but we have not reached the level … of civil war,” Zebari said.

He contrasted his government’s handling of opposition demonstrations to the brutal crackdown by Egypt’s military-run government on the Muslim Brotherhood, which has resulted in hundreds of deaths and rising instability.

Iraq “has not resorted to some methods Egyptians recently deployed to disperse demonstrators,” Zebari said.

On other matters, the Iraqi foreign minister said:

The Iraqi minister said his country remains grateful for the US-led overthrow of Saddam Hussein, and that with continued US help under a strategic framework agreement, Iraq can overcome the challenges of terrorism and sectarianism.

“Iraq was the first country in our region to make the transition from dictatorship to democracy,” Zebari said. “The road has been long, hard, very arduous and tortuous but still worth taking. … For all the suffering we have endured, the people of Iraq and our neighbors are much better off with Saddam gone.”